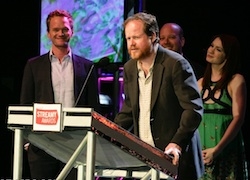 The Dr. Horrible’s Sing-Along Blog sequel rumors have been flying since days after the web musical premiered online last summer. Still, despite strong desire from fans and the cast themselves, there wasn’t any movement on the ‘Dr. H 2‘ mostly due to creator Joss Whedon’s primary commitment to his FOX series Dollhouse. But this week there’s new confirmation that the project is moving forward.

During a conference call to promote the new season of Dollhouse, Whedon somewhat officially confirmed that a sequel is going to happen:

The main question, he says, is whether he does it “on a shoe string again” or goes bigger budget and “invites other people into the process.” Either way, he promises that it won’t affect the storyline. (via TV Guide)

In terms of those “other people in the process,” we do hear that Whedon is shopping a digital studio proposal around Hollywood, including to the major studios, looking to raise investment in the $5 million range, according to sources. The unnamed Whedon studio will apparently look to produce four original web series a year, two of which will be directed by Whedon himself. One of those two will be the above mentioned Dr. Horrible sequel.

By Tubefilter Research estimates, the Streamy-winning show grossed just under $2.5 million, a number that was later reported by in a recent Forbes feature on Whedon. With a production budget just over $200,000, that’s not a bad return on investment (12x). But the question remains can he strike web gold again?

The revenue was largely driven through digital download sales at iTunes partly by accident as the initial release took down the free streaming version on the Dr. Horrible site itself. This, and the short initial window on Hulu caused thousands of fans to pay the $3.99 for the full season. Then there was the highly touted DVD release right in time for the holidays that featured the artfully crafted musical cast and crew commentary.  The business model proposed for the new studio would follow that same paid-download and DVD model.

As for the title of Dr. Horrible’s new season, it’s anyone’s guess at this point. The NY Post unsuccessfully tried to sneak it out of Nathan Fillion during an interview about Castle, though Fillion did say he knew what it was.

Also to be determined is whether or not web star Felicia Day will return in some way after her character Penny was killed in the show’s surprising finale. This is Whedon we’re talking about here and who knows, it’s possible Penny could return, as one fan postulates, as Dr. Horrible’s evil clone/robot girlfriend.