If you were online at all last week, it’s hard to make the case you weren’t reminded of something happening on the 25th. The incessantly catchy music video, “Do You Wanna Date My Avatar,” turned out to be the most successful (and viral) promo for a web series we’ve seen to date. The four-minute dance pop fantasy was not only a swift monetary success, but ignited a growing fanbase around the launch of the hit web series’ third season.

Today the much-anticipated Season 3 of The Guild kicks off exclusively on XBox Live, before rolling out to the rest of Microsoft’s three-pronged network—MSN, XBox Live and Zune on September 1. While the phased rollout may frustrate some fans who aren’t XBox owners, it comes with the territory of exclusive online distribution deals like this one, which pay an upfront premium to the creators for the right to a release window on its platform.

As announced back at Comic-Con last month, the season significantly steps up the production elements and the cast, most notably adding a rival guild into the mix headed up by new cast member, Wil Wheaton. Codex (Felicia Day) and her Knights of Good gang—Zaboo (Sandeep Parikh), Bladezz (Vincent Caso), Vork (Jeff Lewis), Tink (Amy Okuda) and Clara (Robin Thorsen) are all back for the new season and must put their past inter-guild squabbles behind them. 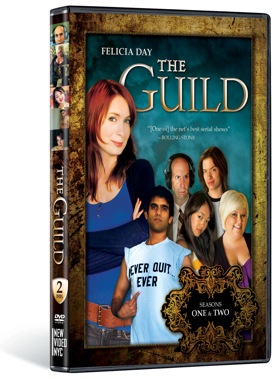 While for now you’ll have to head to XBox Live to watch the new season online, there was also news that The Guild team has reached a deal with retail DVD distributor Newvideo to release seasons 1 and 2 of the series in the US and Canada. This is the same company that put out Joss Whedon’s Dr. Horrible’s Sing-Along Blog DVD earlier this year. Previously, the two seasons had only been available on as Amazon-exclusive DVDs. New cover art has been whipped up for the new DVD which is slated to hit retailers’ shelves on September 29th and will sell for $19.95.

For bonus materials to be included on the 132-minute, 2-disc DVD release, we’re promised a fair amount of unseen content like original audition footage, table reading, gag reels and even script PDF pages to go along with the usual   audio commentaries and cast & crew interviews.

With over 25 million total views on the Streamy-winning series, it’s safe to say this is a bonafide online hit, with steady interest from mainstream print media interested in what all the fuss is about. And while the show never actually says the name of its MMOG (massively multiplayer online game) that its characters obsess over, it’s presumed by most fans to be something pretty close to World of Warcraft. That explains why Blizzard Entertainment, the software company behind the uber-popular (12M+ subscribers) game, has made the show a staple at its annual BlizzCon conference which went down last week.