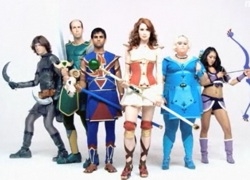 After much anticipation since its ‘surprise’ debut at Comic-Con in San Diego last month, The Guild’s first ever music video is now up on YouTube for your mid-day jam-out pleasure. The suspiciously-catchy track, “(Do You Wanna Date My) Avatar?” features Felicia Day and the full Guild cast all in their full WoW avatar garbs singing a sexy fantasy ballad in a dreamlike white limbo.

As we learned at Comic-Con, Day wrote the lyrics before handing them over to Dr. Horrible producer and composer Jed Whedon (brother of Dr. Horrible creator Joss Whedon) who wrote the music and directed the video. Whedon’s wife and Dr. Horrible writer Maurissa Tancharoen makes a cameo as one of the backup dancers. The colorfully detailed avatar costumes, designed by Sarah Trost, were even donned by the full cast at the Comic-Con panel.

The Guild camp is asking fans to support the series by purchasing the $0.99 MP3 on Amazon

or video on iTunes. Season 3 of the celebrated web series is set to debut August 25th on MSN, Zune and XBox.