01The Founders – The Selected Few from TechStars on Vimeo. 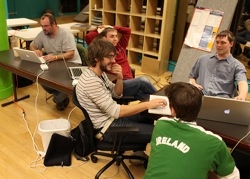 TechStars, the mentoring startup incubator in Boulder, CO (and soon to be Boston as well) has launched its first original web series, The Founders, which will track three tech startup companies throughout the summer as they relocate to Boulder to take part in the highly selective program.

We caught up with TechStars’ Andrew Hyde and asked him what prompted the leap into web series. “We have always tried to tell the story of what we do in a better way,” he told us.  “The series is a continuation of the great CurrentTV piece that was done last year.”

Behind the camera producing, directing and editing the series is Megan Leigh Sweeney of AlpineLightPictures, who also headed up the CurrentTV video project. Hyde also chips in on shooting and TechStars chief David Cohen narrates and conducts most of the interviews.

With over 500 companies vying for the 10 slots in the program, just making it out to Boulder is an accomplishment. From that 10, three were selected for the web series. “We chose the three teams based on David meeting them and tried to mix up the industries,” Hyde explained.  “The teams didn’t know that they were being selected, or that others were.”

With startups often protective of their inner workings, especially prior to getting a foothold with their products, I wondered about the concern for the firms exposing their ‘secret sauce.’

“I don’t think there are many strategies this early stage that are really that private or would hurt to be out there,” Hyde added. “Teams reserve the right to not talk about this when they are being filmed.  In my experience being open with your ideas and implementation does nothing but help, and can connect you with some great mentors or supporters.”

Ok, but these are teams spending countless hours in close quarters with each other. What about the reality TV drama that seems inevitable. Hyde assured us that as producers they are trying to keep it out of that realm. “I see a lot of reality TV drama happening because the producer pushes them in that direction,” he pointed out. “Our producer is really our network of mentors, which will push the teams in a quality direction.”