The Fine Brothers—Benny and Rafi Fine—are well known in the web video scene these days, netting over 21 million views and counting on their growing library of videos. Their clever brand of offbeat humor has been in high demand lately, as the comedy duo recently signed on with Just For Laughs to produce a second season of Lost Parodies, their hit action-figure spoof of ABC’s Lost. Add another feather to their caps, as they have now signed a multi-sketch deal with video site iKlipz. The first sketch, “What is Eggnog?” is up today on the site (see above).

The videos will be exclusively on iKlipz.com for one week, then will be released to their super popular YouTube channel, which has been steadily climbing up YouTube’s most subscribed comedy list thanks in part to the success (over 1.2 million views) of their recent “100 Movie Spoilers in 5 Minutes” video. 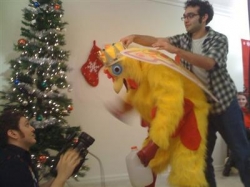 The brothers (yes, they are in fact brothers) are classic web video multi-hat-wearing creators, serving as writers, directors, actors and producers in all of their works. “When we aren’t creating narrative web series or action figure content we are well known for our irreverent and sometimes dark sketch comedy that has been the backbone of our success online,” they told us this week.

The deal appears to be a move by iKlipz to lure some of the top web creators (and their viewer traffic) to the filmmaker community site founded by former Paramount Classics co-chief David Dinerstein, which relies on display advertising as its primary revenue stream. “The folks at IKlipz are all about allowing us to tap into that edgy, over the top content that many companies shy away from despite how popular and viral it becomes,” the brothers told us. “More sketches will follow into ’09 where the mix of irreverent characters and topical sketches will pour into the internet like the eggnog in this video.”