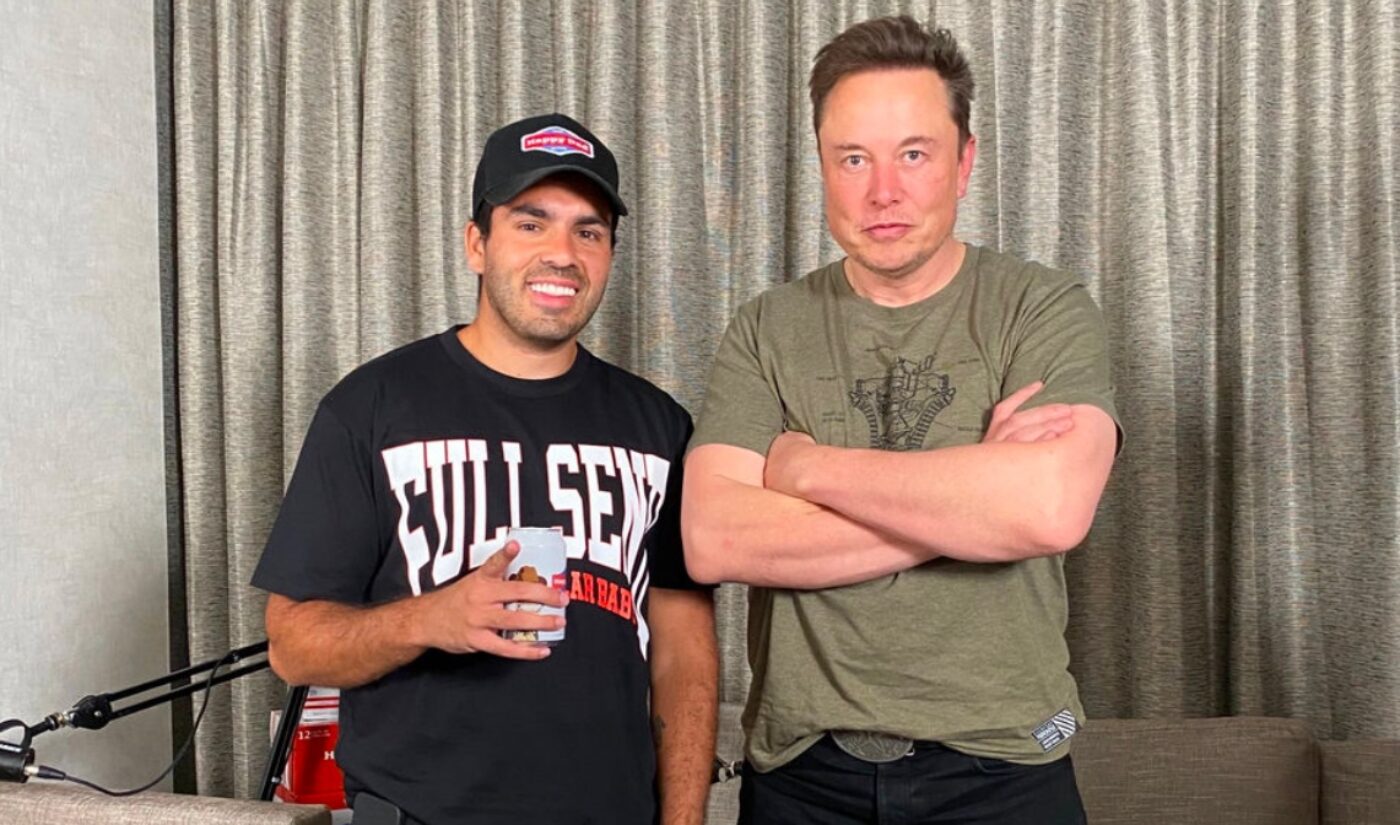 Nelk may be a bunch of prankish boys, but the group’s podcast is landing all sorts of high-profile guests. Five months after they interviewed Donald Trump, members of the creator collective sat down with Tesla and SpaceX founder Elon Musk, who joined the Full Send podcast for a three-hour discussion.

The conversation with Musk was hosted by Nelk ringleader Kyle Forgeard, group members Salim and Steiny, and Full Send President John Shahidi. Shahidi, an online video vet known for his work with Shots Studios, began the podcast episode by explaining how he convinced Musk to come on as a guest. He noted that he met the billionaire nine years ago and send him the Full Send interview with Trump after its release. Shadidi invited Musk onto the show and the initial response was “not yet.” Eventually, after some follow-ups, Musk agreed to meet Forgeard and co. in Austin for a chat.

The Nelk foursome had several cases of their Happy Dad hard seltzer on hand for the interview. Once Musk arrived, he tried out the beverage for himself, and he and his hosts slipped into a relaxed conversation. Across three hours, they discussed everything from Mars to marijuana to potentially apocalyptic scenarios that could affect the world. The Nelk boys didn’t push Musk too much about his ill-fated bid to buy Twitter, but they admitted that Musk’s presence affected the tenor of the talk. “Sitting with someone who’s so much smarter than all of us is just f**king intimidating,” Forgeard said.

The entire Elon Musk episode of Full Send is now available on the podcast’s official YouTube channel. Even though the video is more than three hours long, Nelk’s fans have eagerly tuned in. The VOD version of the interview needed less than a day to get more than two million views.

As far as the Full Send podcast goes, two million views in a day is somewhat ordinary. The show’s most-watched episode, featuring boxing legend Mike Tyson, has snagged 8.8 million views on YouTube. And the group’s conversation with Trump was up around five million views before YouTube forced its removal from the platform.

The Full Send podcast launched in 2021. Since its inception, the program’s featured guests have leaned toward the right side of the political spectrum. In the Musk episode, Forgeard said that he’d like to have more left-wing guests, but convincing them to come on the show has proven tricky. “We’re down,” Forgeard stated. “They won’t do it”