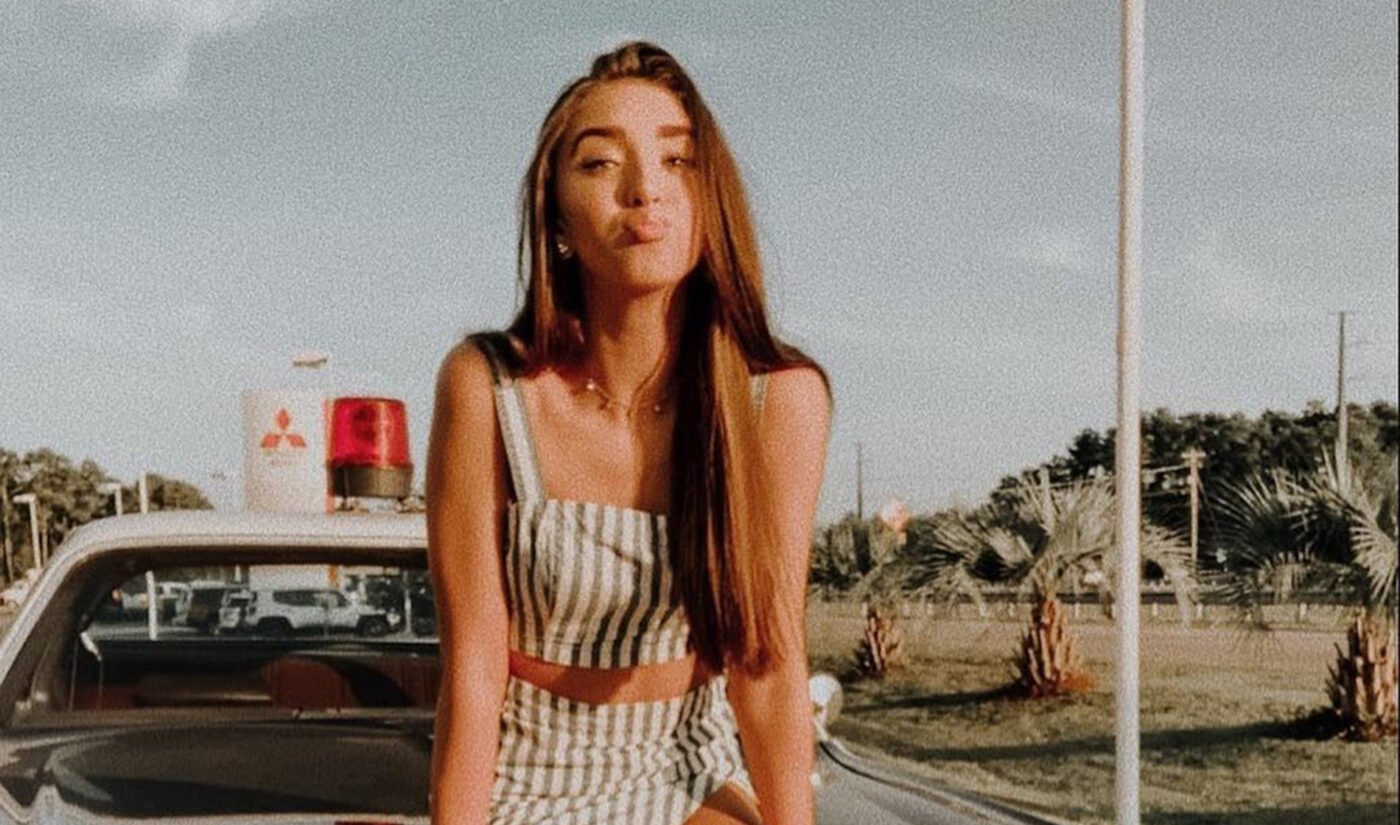 When we talked to Jordi (just Jordi) in September 2021, she had 8 million followers on TikTok, half a million on YouTube, and big dreams about using her social media footprint to launch a music career.

Now, those dreams are coming true.

For those who don’t know her, Jordi is an OG musical.ly creator who migrated to TikTok when ByteDance merged it with musical.ly back in 2018. She was a competitive dancer when she was young, so she figured TikTok might hook her up with a community of like-minded movers and makers, Instead, she stumbled into a growing contingent of comedy creators–and ended up becoming one herself.

Over the past six months, Jordi’s quick comedy sketches have grown her TikTok account to 9.4 million followers and her YouTube channel to over a million subscribers. She’s also bumped up to all-time-high monthly viewcounts: 67 million in April, and 67 million so far this month, with a few more days still to go. Her social presence doesn’t end there: she keeps followers up to date with the day-to-day on Snapchat, something she says is a key part of staying tight-knit with her fans.

She also says those fans had a major role in helping launch her music career. She can’t share many details yet, but she was recently in Los Angeles recording her debut song, and says she has “a bunch of exciting things planned with TikTok and Spotify.”

We’ll let her tell you all about it below.

Tubefilter: How did it feel to hit a million subscribers?

Jordi: Hitting a million is like…I don’t think anybody ever expects to hit it, and I definitely didn’t. It’s one of the coolest mind milestones I’ve had, because when I was young, I used see all the YouTubers who, you know, you look up to, and you think that one million number is this impossible number, but it’s not! If you put like a lot of hard work and actually put dedication into it, I think anybody could do it.

Tubefilter: One of the reasons we wanted to talk to you for this column is because you hit a million followers on TikTok a while ago. We tend to hear from people that hitting a million on YouTube is different—and harder. Do you have any thoughts on that?

Tubefilter: You used to make longer content on YouTube and it didn’t take off as much, which is the case for a lot of people. What has YouTube Shorts been able to do for you in terms of building your audience?

Jordi: I work super closely with The Network Effect. I work with them on content strategy, both short-form and long-form, and also on all aspects of YouTube—channel, community, best practices, all that stuff. I actually did have some success in long-form, but I would definitely say that Shorts has completely changed the game for me. Posting a lot of Shorts is what pushed me to that one million.

Jordi: I do a mix of those. Sometimes I’ll, you know, recycle some of my content that performed well on TikTok and post it across all my platforms, but I also have Shorts that are native to the YouTube platform.

Tubefilter: A lot of creators we’ve talked to who are doing well on both TikTok and YouTube say the audiences are very different. Videos that take off on one platform might not take off on another. Do you have any experience with that?

Jordi: Definitely. There’s been some videos that didn’t perform well on TikTok at all, and they’re some of my biggest videos on YouTube. I definitely think it’s just probably a difference in age groups and with people, everybody’s sense of humor is different when it comes to comedy stuff. So maybe the group that subscribes to me on YouTube or who my content gets recommended to is just a different group of people than on TikTok.

Tubefilter: Do you think one particular audience is more engaged?

Jordi: I do think that my YouTube subscribers are very loyal fans. But I’m very close with my fanbase, so I feel like for me personally, those loyal people who genuinely support me are kind of throughout all my platforms.

Tubefilter: Looking at our last story, you’ve gained half a million subscribers since September, which is huge.

Jordi: Thank you, yeah! I think what really pushed me to that was Shorts. I honestly just started posting an insane amount of Shorts, like probably an obnoxious amount. But it’s a lot of work. You have to edit all these videos, you create them. It’s a lot more work than people think it is. But I’m definitely glad I put in that effort, because it paid off.

Tubefilter: How many videos a day are you posting, across TikTok and YouTube?

Jordi: Honestly, it kind of differs. Whenever I’m really on schedule…well, I was actually just in L.A., working on my music, which is a super exciting thing because that’s coming up super soon, so my schedule got a little bit off with that. Whenever I’m back home, I try to post on YouTube Shorts every day, like three to five Shorts a day. It differs a little bit with TikTok and Instagram Reels. Sometimes it’s more. It just depends on how much content I have and how much time I’ve put into creating stuff.

Tubefilter: You must have a wild production schedule then.

Tubefilter: You probably don’t really have an “average day,” but if you did, what’s the average day like for you?

Jordi: Typically content is honestly a big part of my day. I wake up and I get ready for the day, eat breakfast. Then I like start posting on Snapchat. I post on there a lot during the day, kind of just bringing my fans along with me through day-to-day stuff. I just like to stay super connected with everybody, and I feel like being super active with my fans is kind of what keeps us all engaged with each other.

Jordi: Yes I do. Whenever I post long-form videos, I always cross-promote.

Tubefilter: What role do you think your level of engagement with fans has had in continuing to build your community? How important is that as an aspect of your growth?

Jordi: I think it’s super important because I like to stay genuine and authentic and relatable. I almost talk to them like they’re my friends, and I feel like that’s such a good relationship to have with people who look up to you. I’ve taken on the role of being a role model to a lot of young girls, and I just like being able to have them feel that I’m there, and I’m a friend, rather than someone who’s just on the internet and is so far away.

Jordi: Yeah, that’s a really good way to look at it. I just want all of the people who support me to feel like they really, really know me.

Tubefilter: So you mentioned your music. Are you planning on being able to use your own music in Shorts and TikToks when it releases?

Jordi: There’s a bunch of exciting things that are coming up related to my music. I’ve always wanted to release music one day, that’s always been my dream, and I’ve built up a platform that’s given me opportunities to get there. So yeah, there’s a bunch of exciting things coming with platforms like Spotify, and I definitely plan on making TikToks with my songs. That’s like a dream. I’m really excited about that.

Jordi: Yeah, I think that on the production side, TikTok and even YouTube Shorts—because I do have such a loyal fanbase on there that’s growing at a good pace—when I do start putting out my music, those platforms will be a great way to promote it.

Tubefilter: Are there any other plans or goals you have for this year?

Jordi: I just want to keep growing on YouTube, TikTok, all my platforms all around. Definitely one of my big focuses is my first song coming out this year, so that’s something I’m really excited about.

Tubefilter: Do you have any advice for creators who are up-and-coming?

Jordi: Don’t get discouraged! As long as you put in the work and the effort and genuinely love what you’re posting, then I think that authenticity will show through your content.

Also, making a posting schedule for yourself is super, super important. When I first started social media, I would post like four or five videos a day and it was such a crazy schedule, my friends would be like, “Jordi, let’s hang out,” and I was like, “No, I’m making videos.”

I would just say having a schedule and staying dedicated to something you really, really want is how you’re going to end up getting there.