Creators On The Rise: Meet the guppy enthusiast behind YouTube and TikTok’s “fish portals” craze 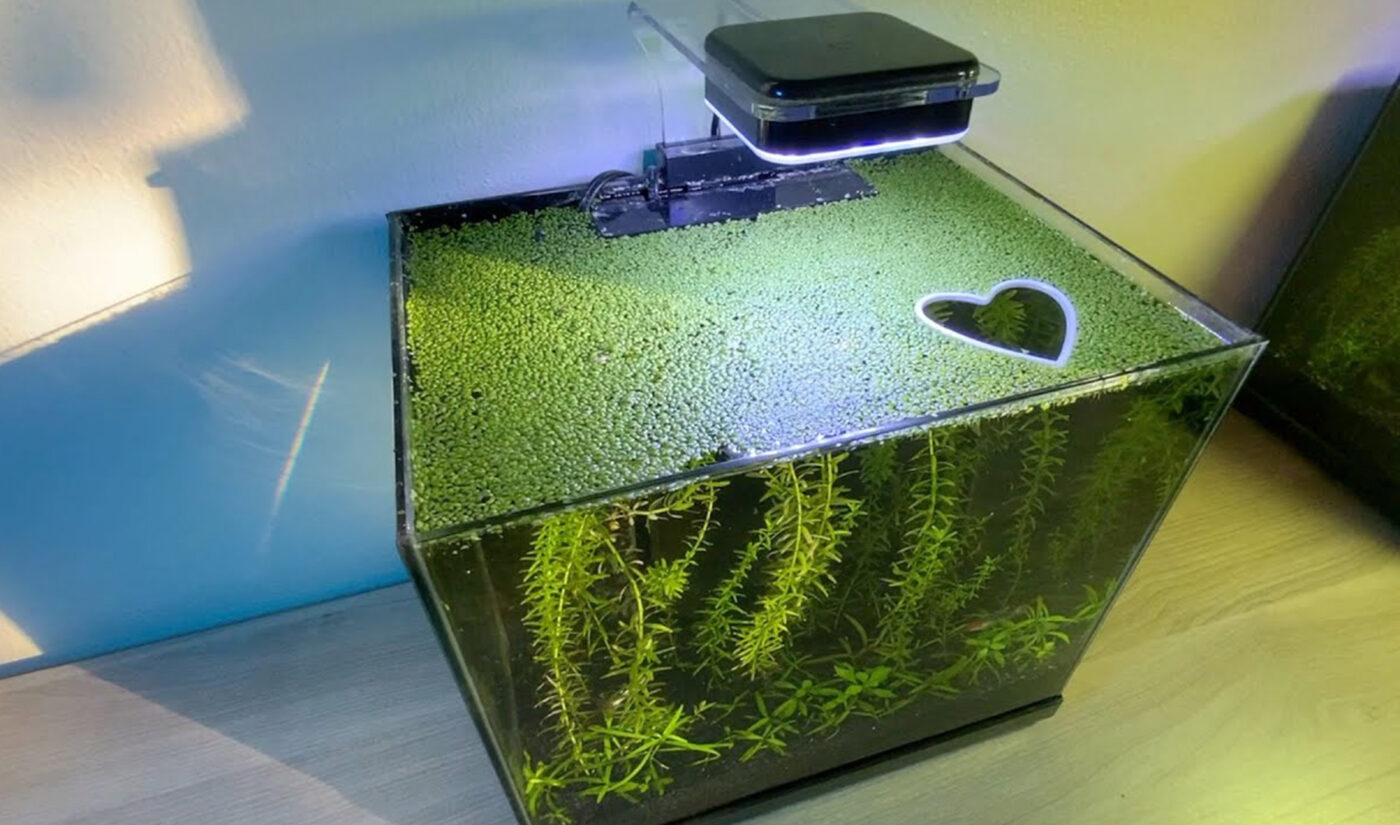 Britney had a problem.

Her fish tanks were beautiful! Her guppies were thriving!

And yet something was making her life as a fishkeeper difficult: duckweed.

Aquarists will tell you that adding a little clump of the floating plant to their tanks once–just one time–can give the whole thing a nice, natural pond aesthetic. But they’ll also tell you that clump will not stay little for long. Duckweed propagates like nothing else, and with the right light, in under a week it can cover the entire surface of a tank.

This can be great in some ways; duckweed gives fish shade and hidey-holes, and also helps the whole filtration cycle. In others, though, duckweed can be a nightmare–and that’s what Britney was dealing with. Her tank’s surface was overgrown with a blanket of duckweed so thick she struggled to feed her fish.

So she came up with a solution.

These days, you’ll see her solution in hundreds, even thousands of aquatic videos across TikTok and YouTube. Basic floating shapes have been used by fishkeepers for decades to open small holes in the surfaces of heavily planted tanks, but Britney wasn’t keen on throwing a plain circle or square into her setup.

Instead, she wanted cute shapes like stars and clouds.

It turned out she wasn’t the only one.

After posting videos featuring her shapes–which she called “fish portals”–across her YouTube, TikTok, and Instagram accounts, she was flooded with requests to buy them. So, she launched her own shop: fishportals.com. 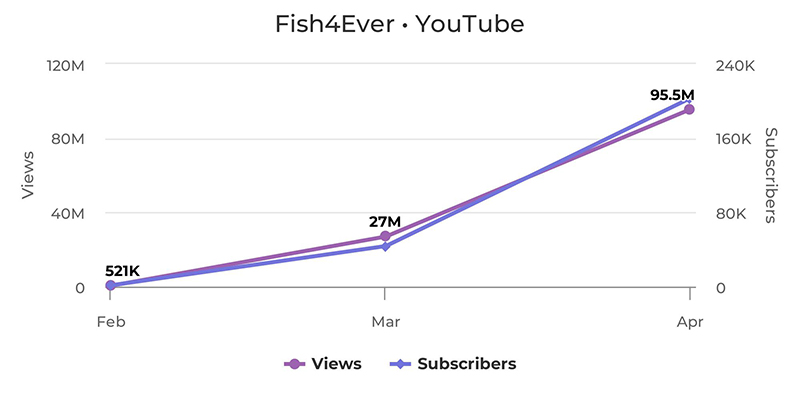 But we suspect the fact that fish4ever has grown from 521,000 views in February to 27 million in March and a whopping 95 million in April–and from around 40,000 subscribers to more than 310,000 in the same timeframe–also has something to do with her star guppy Sushi and Sushi’s small army of children.

Tubefilter: So first, tell us a little about you! Where are you from? What was the very first fish you had? How did you fall in love with fishkeeping?

Britney: Hi! My name is Britney and I created Fish4Ever!

I’m from Portland, Oregon, and I’ve been keeping fish ever since I was 12 years old (I’m 21 now, so nine years). The very first fish I had was a betta named Ombré which was gifted to me by my dad—who also introduced me to the hobby. He’s from Vietnam and grew up around bettas! He would wake up every day to farm rice in the rice fields and was absolutely fascinated every time he found a betta swimming within the fields.

Growing up, my dad would take me to our local fish shop every weekend and I saw how in love he was with the hobby, and so I started to fall in love with it too!

Tubefilter: In one of your videos, you mentioned starting your channel when you were pretty young—young enough that your parents didn’t want you to reveal your name. What got you interested in YouTube, and made you want to start your own channel?

Britney: Yes, I started my YouTube channel when I was 13 years old! I was inspired to create my channel because of other fish YouTubers at the time!

I was an active commenter in the small community, and one day a fellow FishTuber asked me what kind of tank I had, so I decided to make a video!

Tubefilter: How have things evolved for you over the years? How many fish/tanks did you have when you started versus now? How has your video-making process changed?

Britney: My style of fish tanks has definitely changed over the years, but the goal has always been an “aesthetically pleasing” look. If you go to one of my first videos on YouTube, you’ll see that my 20-gallon tank had neon pink gravel and a bubbler. I thought the artificial colors were aesthetically pleasing at the time, but now I follow more of a naturalistic look for my two tanks and pond.

My video-making process has changed a lot, as I have been learning more about what makes the production quality of a video the best it can be.

Tubefilter: I ended up finding your channel because of your star little lady, Sushi, and I noticed that a lot of your other viewers are really engaged with her and her family. Do you think she’s played a role in helping grow your channel?

Britney: Yes, Sushi did have a major role in helping my channel grow! I like to think it’s because of her cuteness but the actual answer is probably because of her kids. She is a guppy fish and has babies every single month, which I frequently update the viewers on.

However, the biggest contributor to my channel‘s growth was something else I created—the Fish Portals! Almost a year ago, I had a problem in my fish tank. My duckweed (a small fast growing floating plant) over took the top surface of the tank and I couldn’t feed my fish easily. I wanted to find a solution, but the only options I found were circular and rectangular shaped rings—which are fine, but not what I wanted for the aesthetic of my tank.

I then decided to create my own feeding rings, which I call Fish Portals! After posting them to my TikTok, Instagram, and YouTube, I found that many fish keepers were interested too, so I started selling them on my website FishPortals.com!

Tubefilter: When did you start making Shorts on YouTube? What effect has Shorts had on your channel’s growth?

Britney: I started consistently creating YouTube Shorts about five months ago, and that has been the catalyst to my channel’s growth.

Before posting YouTube Shorts, I had about 40,000 subscribers and was growing pretty slowly. When I posted my first few dozen Shorts, I got around 400 views a Short for over five months. Then, out of the blue, the algorithm picked them up, and since then my channel has been growing at a steady pace! It still shocks me that I’ve surpassed over 200,000 subscribers and 160,000+ of those came just from the last month. I’m so grateful!

Tubefilter: What’s the most important thing you’ve learned as a creator so far?

Britney: Simply have fun and never give up!

Tubefilter: What’s your filming and posting schedule like? Do you try to film every day? Do you film videos in batches? Do you pre-plan, or film spontaneously? Do you have a set posting schedule?

Britney: At one point in my YouTube career, I attempted to film every single day, but found that to be inefficient. Now, I like to think of ideas, spontaneously film in batches, then edit.

My posting schedule is random now, but once I start posting full uploads again they will likely be on Saturdays.

Tubefilter: Do you have any plans for you and your channel for the rest of this year? Any goals you want to reach?

Britney: I plan to continue posting YouTube Shorts while integrating full uploads again soon. I decided to take some time off from full uploads to focus on improving my editing and writing skills. This time off has also allowed me to reflect on what I want for my channel.

My goal is to consistently improve my videos with each upload. I also want to release merch that represents my brand well.

I’ve never really been one to focus on numbers since this has always just been a hobby to me, but hopefully we can reach 500,000+ subscribers by next year!