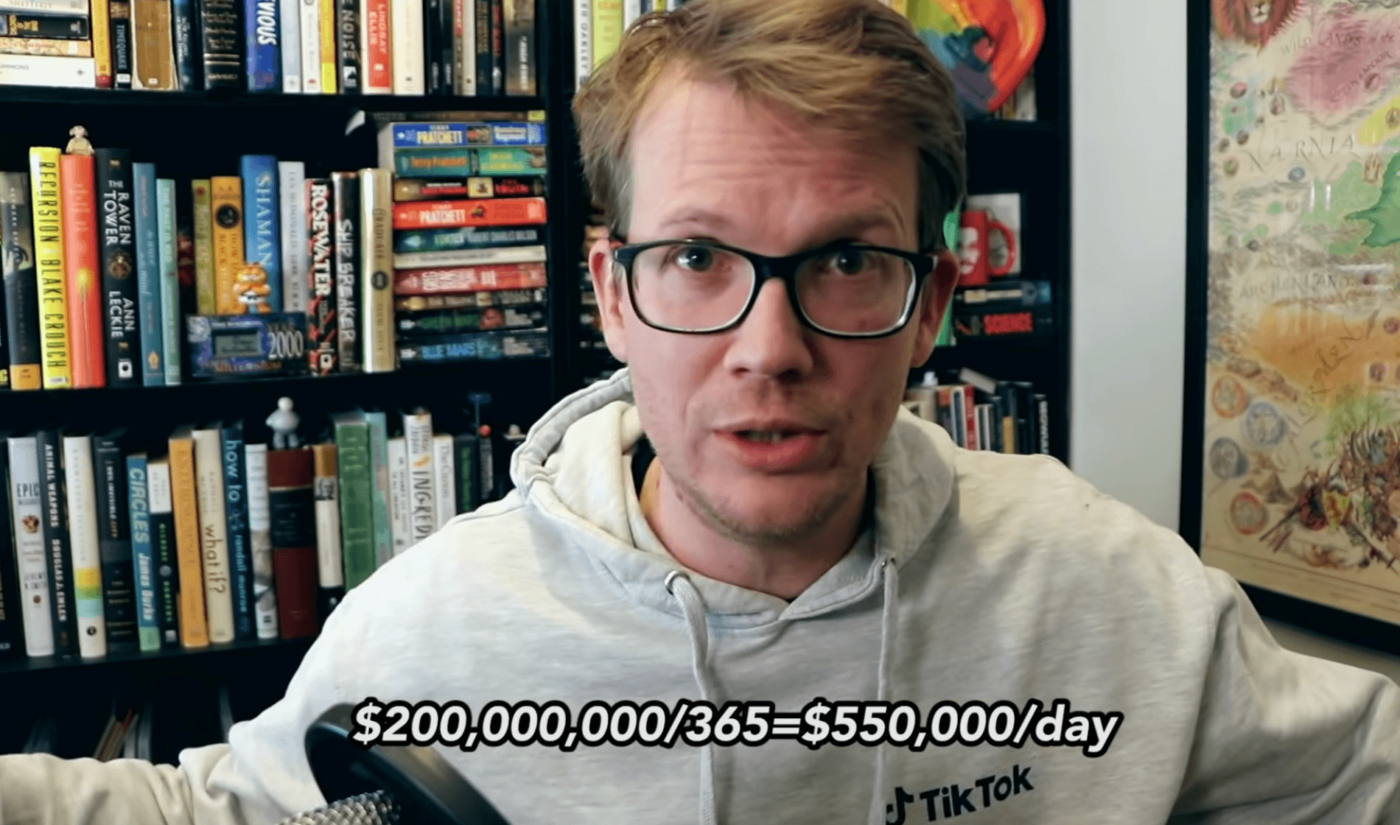 In 2020, TikTok established a creator fund that distributes $200 million annually to creators based in the U.S.

That’s an impressive-sounding figure…until, according to Hank Green and his latest upload on YouTube, it seems like “when TikTok becomes more successful, TikTokers become less successful.”

Hank Green has been making videos on YouTube since 2007. He’s one half of OG creator duo Vlogbrothers, a founder of VidCon, and the co-owner/CEO of media company Complexly, which produces numerous long-running YouTube series, including Crash Course and SciShow. He’s also been on TikTok since September 2019, and his account has 6.3 million followers.

Basically, he knows what he’s talking about.

As Green explains, YouTube’s decision to launch its Partner Program “changed things more than anything else” in the “history of online media.”

Green notes that the Partner Program’s AdSense split (55% to creators, 45% to YouTube) hasn’t changed since it was introduced, despite the fact that YouTube’s annual advertising revenue has gone from $15 million in 2006 to $20 billion in 2020. This 55/45 structure means it is impossible for the amount of money YouTube earns from advertisements to outpace the amount creators earn. YouTube’s profits and creators’ profits are inextricably intertwined: as YouTube’s ad revenue scales up, so does the amount creators make.

TikTok’s creator monetization structure is entirely different. Unlike YouTube, TikTok does not run ads directly on creators’ videos—it runs ads between them. Because of this, there’s no way for individual creators to generate ad views with their content, and thus no way for them to earn ad revenue the way they would in YouTube’s Partner Program.

TikTok’s solution to the lack of YouTube-esque monetization was its creator fund. It doesn’t publicize exactly what metric creator fund payments are based on, but Green says he believes it’s calculated by watch time. He theorizes TikTok essentially looks at all the watch time generated by all the creators who have enrolled in the fund, then divvies up the $200 million between them proportionally, with more money going to creators whose videos brought more watch time.

That’s where things get worrisome for Green.

$550,000 per day is no small number—but it’s static. No matter how much money TikTok makes (its parent ByteDance brought in $58 billion in 2021), and no matter how many creators are in the creator fund, it pays U.S.-based creators $200 million per year.

So, the more creators who join the fund and make good content that gets views, the less money there is to go around for everyone in the fund.

Green shows his own earnings as proof. In 2020, he made five cents per 1,000 views from the fund. Now? He makes 2.5 cents per 1,000 views. His audience and viewership have gone up, but because there are more creators and more views vying for that same $550,000 per day, his content makes less.

In YouTube terms, both those CPMs are abysmal, but Green points out that “a view on TikTok is always going to be worth less than a view on YouTube because you don’t get one ad per view of a video.”

Based on a survey of Green’s followers, TikTok viewers on average watch one ad for every 10 views. Using data from a recent ad campaign he ran on TikTok, Green found that he paid TikTok around $3-6 per 1,000 views. Divide that by 10 (because viewers see one ad for every 10 videos), and he figures TikTok makes between 30 and 60 cents of ad money for every view creators’ videos bring in.

Green’s findings show that if TikTok paid the same way YouTube does, creators would be making at least 16 cents per 1,000 views—still much less than YouTube, but six times more than they’re making now.

Just a shout out to my TikTok partner manager who scheduled me for a really cool project today, sent me a massive flower arrangement a week ago with a very sweet note, and now is dealing with me being like, “I love you, but your platform’s revenue sharing is absolute crap.”

“Every creator in the creator fund who thinks to themselves, ‘Wow, $1,000 a month, that’s $12,000 a year…’ That person could be a full-time creator,” Green says. “They could be thinking about expanding, about hiring, about creating a business in their community for their audience. This is the economic engine that drove YouTube forward, and TikTok is just letting it leak out of the tub into their bottom line.”

Green adds that he thinks TikTok’s fund structure is a “billions of dollars problem” and “a huge hole in the creator economy.”

He encourages creators to organize and speak up about their earnings, because right now TikTok is “not sharing anywhere near enough.”