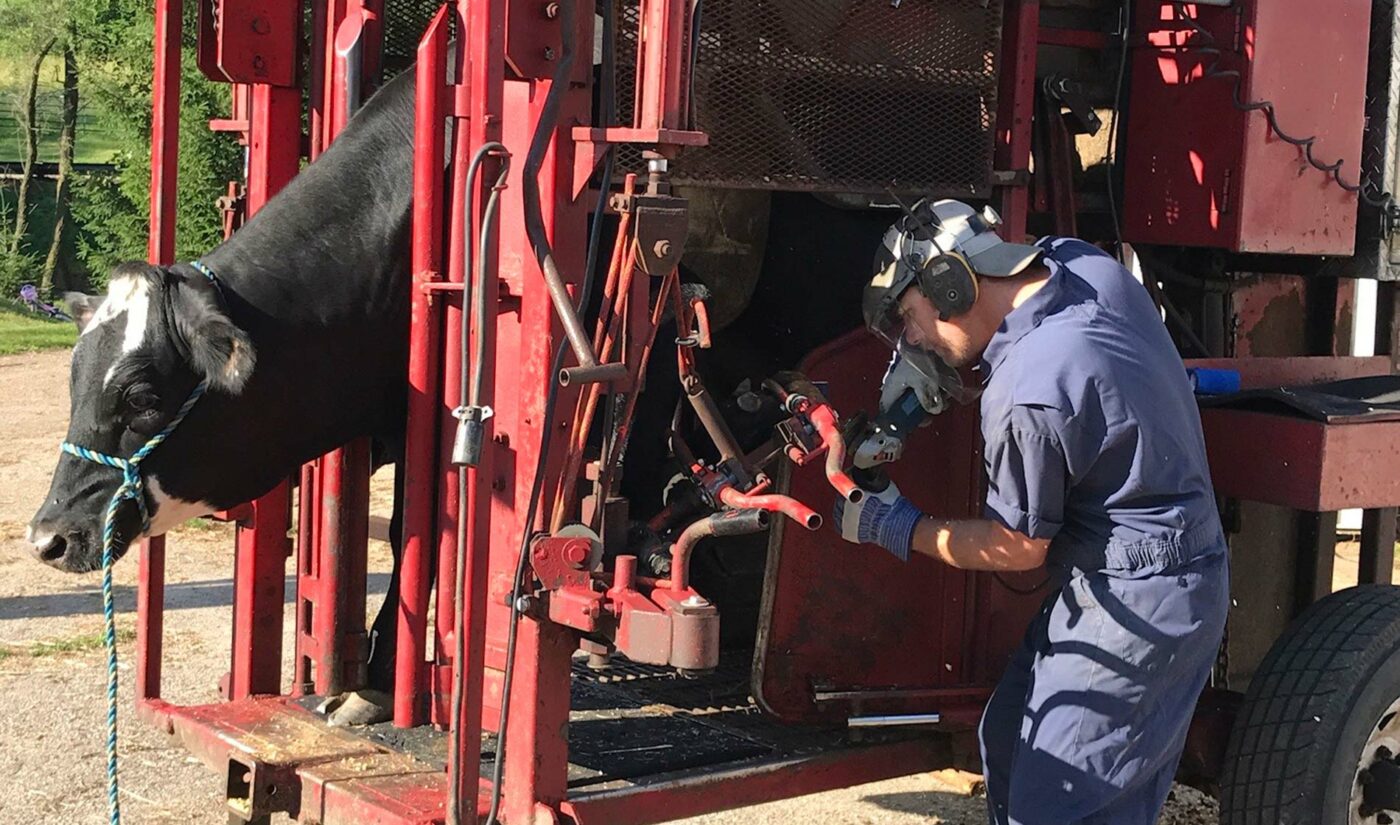 If you were a cow with a sore foot, you’d breathe a sigh of relief seeing Nate Ranallo roll up the road.

But even us humans can get some sympathetic catharsis watching Ranallo, who’s a professional hoof trimmer, tackle all manner of problems befalling our trusty livestock.

Ranallo is from Wisconsin, and has been around cows all his life. After growing up on his family’s small dairy farm, he snagged a college job at a different farm. There, he had his first experiences working with the local hoof trimmer, and before he knew it, he’d become set on hoof trimming as a career. He graduated college and became the hoof trimmer’s apprentice, and after three months of six-days-a-week training, he returned to his hometown and launched his own business: Ranallo Hoof Care.

Like several other Creators on the Rise interviewees, including fellow farming company Right Choice Shearing, Ranallo began uploading videos during the COVID-19 pandemic. For him, taking his business on YouTube was a two-pronged venture: first, he hoped it would drive more money to his company, and second, he wanted to create videos that farmers could use as guides to handle their own cows’ hoof problems.

He kept–and continues to keep–production simple. Whenever he’s out on a call and an interesting case pops up, he takes out his iPhone and records it, then edits with the phone’s onboard iMovie software and uploads from there. The result is an everyday look at his job that would certainly provide guidance for farm owners and other professionals looking for help.

However, to Ranallo’s surprise, the bulk of his audience is people who “have little to no contact with cows.” It’s pretty easy to see why Ranallo’s channel has broad appeal. It’s a bit like the Dr. Pimple Popper of cow tending, with the bonus of getting to see animals’ pain relieved at last. 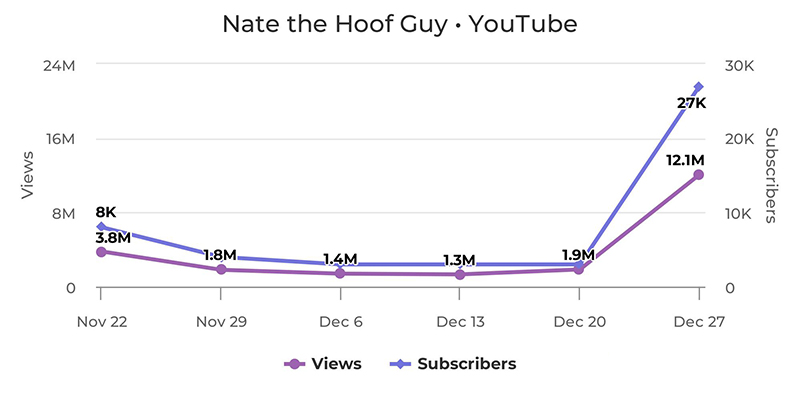 Ranallo’s first viral video was Cow’s Hoof Blows Bubbles, which is embedded above and might not be for the easily queasy. Uploaded in September 2021, that video singlehandedly pushed Ranallo’s channel from 50,000 subscribers to 100,000, and from around 50,000 views per day to more than one million per day, he says. The video now has 37 million views (and plenty of commenters weighing in what fascinates them about it).

All these additional views are adding up to more revenue for Ranallo’s business–and more determination to keep sharing his job with the world.

Tubefilter: Tell us a little about you! Where are you from? How did you decide to become a hoof trimmer? What was the training and education process for it, and how did you end up launching your own trimming business?

Nate Ranallo: I grew up on a small dairy farm in northern Wisconsin. In 1997, I began attending college at Winona State University, and while there I worked on a dairy. One of my responsibilities was to help their hoof trimmer when he came to the farm. That is where I developed an interest in hoof trimming, and after graduating that same hoof trimmer agreed to train me. I trained six days a week for about three months learning the craft and getting experience working in on farm situations.

After those three months of training, I moved back to the area where I grew up and started my own hoof trimming business (Ranallo Hoof Care). Upon getting married, I sold my northern trimming route and settled near La Crosse, Wis., which is where I work and operate my business today.

Tubefilter: You started uploading videos about your work around a year ago. Why then? What made you want to share videos?

NR: I started creating videos in February of 2020. The purpose at the time was to create educational content on hoof trimming and to address some of the common hoof problems that cows can have. I wanted to be able to help farmers and other industry professionals when it came to hoof care.

Little did I know that these videos would become stress relief entertainment for so many everyday people outside of the industry. The vast majority of my viewers have little to no contact with cows.

Tubefilter: You chose YouTube as the place to share your stuff. What drew you to that platform?

NR: I chose YouTube as a video platform because of its superiority in ad revenue generation. I knew that if I did amass a following that it would be the best platform to add additional revenue to my business.

Tubefilter: Your channel has recently seen a big boost in number of views and subscribers. Do you know if there was one specific video that took off, or did numbers go up across a bunch of videos simultaneously?

NR: After approximately 1.5 years on the platform, I had my subscriber count at around 50,000 and my channel was getting around 50,000 views per day. That is when I uploaded my most successful video to date. The video titled Cow’s Hoof Blows Bubbles (embedded above) became public near the beginning of September, and within two weeks my subscriber count had grown to over 100,000 subscribers with over one million daily views. Within a month, my subscriber count ballooned to over 200,000. Today, four months later, it sits around 430,000. That video has amassed around 36 million views to date. It caused a snowball effect and many of my older videos began taking off as well.

Tubefilter: What does the average day look like for you? How often do you film? How much time do videos take to edit and upload?

NR: My average day begins around 8 a.m. at the farm. I go about my normal trimming routine on each farm, and if I see an interesting case, then I get the cameras out and document it. Some days I may record two or three trims, and other days I may not have any to document.

I voice over all my videos, and each video takes about two to three hours of editing. I keep things really simple, doing all my editing using iMovie and shooting my content on GoPros and my iPhone 12.

Tubefilter: What’s your favorite part of being on YouTube? What makes you want to keep producing videos?

NR: My favorite part about being on YouTube is being able to add value to the work I’m already doing and being able to share an obscure profession to the world. The revenue I’ve been able to generate keeps me motivated to continue producing videos, and with the size of the platform, the sky’s the limit.

Tubefilter: Has your recent engagement spike on YouTube changed anything for you? Do you have any new plans or goals for your channel?

NR: The recent spike really hasn’t changed much for me. Of course, the revenue is much higher, but really my goal each day is just trying to master my craft as a trimmer and improve the quality of my videos. The early benchmarks I set for my channel, I achieved much earlier than I could have expected, so now I just try to keep producing quality content.

Tubefilter: Do you have anyone else working with you behind the scenes, like an editor or manager?

NR: At this point, I don’t have anyone working with me behind the scenes. I’ve managed to learn the basics of video editing as I go, but I can certainly see how it would be beneficial, as I’m currently trying to act in all roles. I’ve been delaying the implementation of additional revenue streams like merchandising just because I’m trying to do it all myself. I have hesitancy in delegating duties, and that’s an area I should probably prioritize in the future.

NR: I don’t have any big plans for the immediate future. I want to spend the next year really improving my storytelling abilities and building my editing skills. I want to launch my merch line, and if I can continue to grow like I did in 2021, I’ll likely hire some help to elevate my channel further.

I really can’t predict where I’ll be in five years. I’m blessed to be in the position I’m in today, and I don’t want to take any of it for granted. I think if I can keep that mindframe, it’ll keep me hungry.