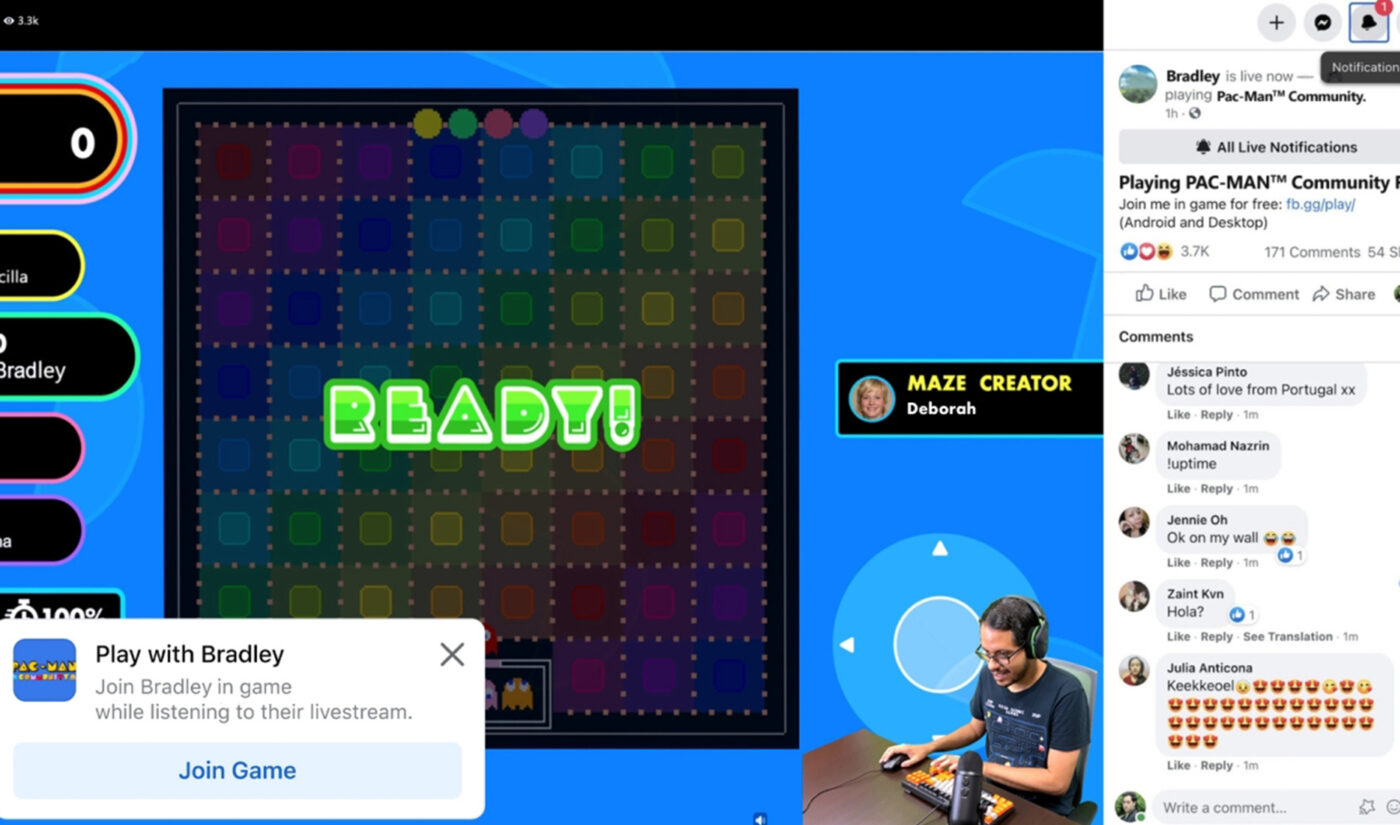 Facebook is pushing streamer-fan interactivity with two new features that are part of an initiative it’s calling “Play Watch Connect.”

“Imagine a world where you didn’t just watch a gaming creator stream their play session, but instead you could jump in and play with them live without needing to buy, download, or install the game–or a world where the gaming video you were watching becomes interactive itself,” Facebook said in a blog post today.

The company’s beginning steps to making that imagined world a reality are two features, the first of which is Play with Streamer.

Play with Streamer is exactly what it sounds like: A tool that lets creators go live, then invite viewers of their stream to come play games with them while they’re broadcasting.

On the viewer side, Facebook keeps the stream running, but minimizes it in a corner of their screen once they’ve hopped into a Play with Streamer game, so the game will take up the majority of their screen but they’ll still be able to watch themself participating in the creator’s content.

Streamers across platforms can (and do) invite their viewers to play games with them in real-time, but this process is generally organized externally, without an application or feature provided by whatever platform they’re on. Facebook seems to be aiming for convenience and distinction by leaning on the “without needing to buy, download, or install the game” bit of its new tool.

Of course, that stipulation means Play with Streamer can only operate on games that Facebook has created itself–or licensed.

Interactive Pac-Man in the metaverse

To that end, Facebook is rolling out Play with Streamer in the Pac-Man Community, its shiny new licensing deal with the iconic arcade game. Also announced today, the partnership adds a built-in version of Pac-Man to Facebook that can be played either solo or with up to four cooperative players.

The game additionally comes with a Maze Creator mode, where players can build their own levels, and a special Watch mode that Facebook says “turns mazes into 3D streams powered by Unreal Engine, where viewers can interact directly with the video player to pick a side and power up the AI PAC-MAN or Ghosts in competition with each other.”

Facebook describes these tools as “new experiences layered on top of livestreams.” In the case of Pac-Man, the Watch mode is a 24/7, automated livestream where viewers interact with one another, but in the future, Interactives “might include trivia questions, audience polls, and even playable games on-stream” that connect streamers and viewers, the company says.

Mark Zuckerberg, cofounder and CEO of Facebook’s recently rebranded parent Meta, said in a post on his Page that the Pac-Man partnership ties into Facebook’s plan for a metaverse future.

“Gaming is a big part of the metaverse, and I’m looking forward to seeing games like this get more interactive and immersive,” Zuckerberg said.