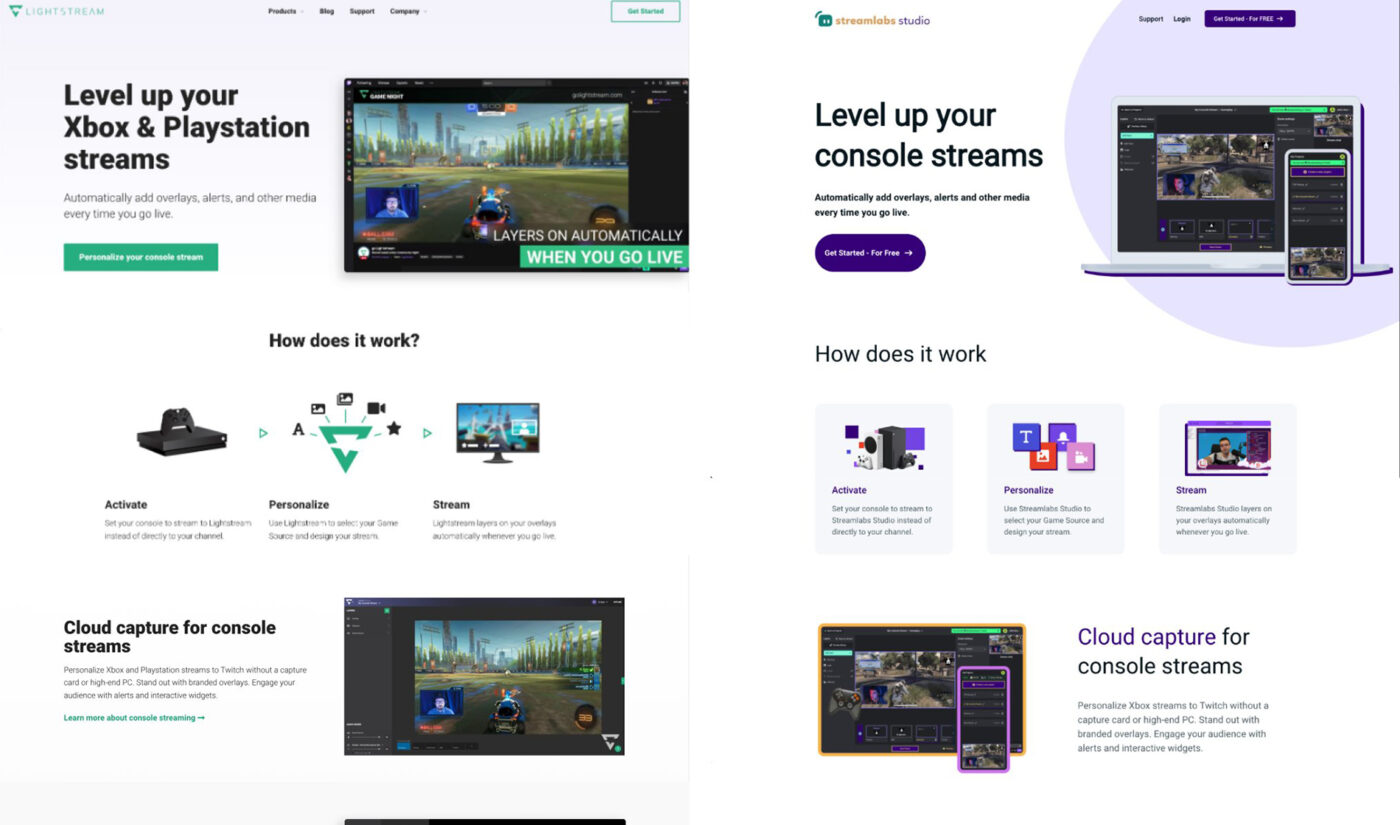 Logitech-owned Streamlabs, a company that produces digital tools for content creators, is changing the name of one of its flagship offerings after being accused of copying other businesses’ products and websites.

🤡 Hey, can I copy your homework?

▽ Yeah, just change it up a bit so it’s not obvious you copied.

As shown in the screenshots Lightstream provided, Streamlabs Studio and Lightstream Studio’s websites are virtually identical in both layout and content.

For example, Lightstream Studio’s site advertises the tool as a way to “Level up your Xbox & Playstation streams,” since you can “Automatically add overlays, alerts, and other media every time you go live.”

Over on Streamlabs Studio’s site, it’s advertised as “A way to level up your console streams,” since you can “Automatically add overlays, alerts and other media every time you go live.” The sole change to the latter phrase is a dropped Oxford comma.

Lightstream’s allegations alone were enough to get Streamlabs in hot water. Then members of Lightstream’s staff chimed in. Brandon Stennis, who’s currently an influencer talent recruiter at Softgiving but formerly worked as Lightstream’s community manager, provided screenshots of supposed user reviews for Streamlabs Studio that he says were actually for Lightstream Studio.

“I KNOW because I reached out to the people in the reviews for these comments when I worked at @Lightstream!” he wrote.

Meanwhile, Lightstream’s cofounder and CEO Stu Grubbs pointed out that his company isn’t the only one allegedly impacted by Streamlabs:

The team at @streamlabs should be ashamed. Not satisfied enough to ride @OBSProject’s hard work. Now to copy ours down to the layout and every word on our marketing site and our UX in this product. https://t.co/Lot2KPh72y

“OBS” stands for Open Broadcaster Software. OBS Studio is a very popular, free-to-use, open-source (meaning its code is out there for anyone to see/use/modify) broadcasting software made by the OBS Project, which was founded in 2012 by developer Hugh “Jim” Bailey.

Streamlabs’ core product, a broadcasting software released in 2018, is called Streamlabs OBS. The name is trademarked.

One issue: Streamlabs isn’t affiliated with the OBS Project.

“Near the launch of SLOBS, @streamlabs reached out to us about using the OBS name. We kindly asked them not to,” the OBS Project tweeted after being tagged in callouts about the Lightstream situation. “They did so anyway and followed up by filing a trademark[.] We’ve tried to sort this out in private and they have been uncooperative at every turn.”

We’re often faced with confused users and even companies who do not understand the difference between the two apps.

Support volunteers are sometimes met with angry users demanding refunds. We’ve had interactions with several companies who did not realize our apps were separate.

Following the OBS Project’s tweets, Streamlabs announced it would take “immediate action” to remove OBS from its product’s name.

“Streamlabs OBS is built on top of the OBS open-source platform; Streamlabs OBS is also open-source, and our code is publicly available,” it said in a statement posted to Twitter. “We take responsibility for our actions and will support the community.”

Streamlabs does not appear to have addressed allegations from Lightstream or Warp World, another company, which says Streamlabs reached out about its cryptocurrency donation service, asking to collaborate, “Only to then take everything discussed and doing it themselves as ‘pioneers.’”

Prominent streamers Pokimane and HasanAbi have both tweeted that they will stop using Streamlabs’ tools and services if the company doesn’t address allegations. HasanAbi specifically pointed to OBS Project’s tweets, while Pokimane said that she wants to see Streamlabs “resolve this entire thread of issues,” or she will ask them to remove her endorsement of their platform and will use another donation service.