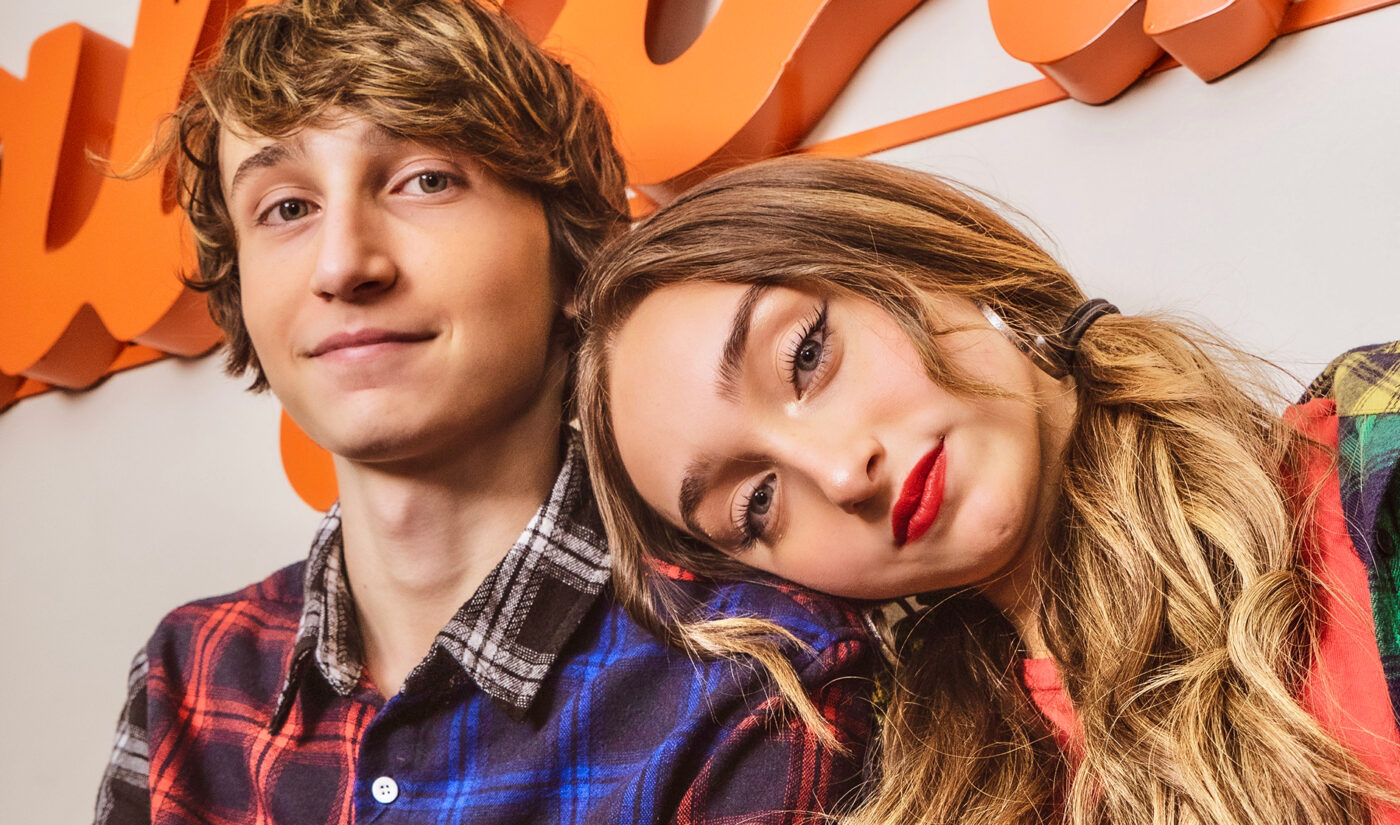 There probably aren’t many TikTok creators who can say they joined the platform because their mom told them to.

But that’s exactly what happened with McKenzi Brooke.

At the time, Brooke didn’t really “get” TikTok. She’d tagged along to Los Angeles with her mom and young brother, Reif Harrison, after Harrison booked a spot on Nickelodeon‘s JoJo Siwa-hosted show Lip Sync Battle Shorties, but to her disappointment wasn’t allowed on set. So her mom had given her an ultimatum: entertain herself by reading a book, go back home to Florida, or start a TikTok account.

For the first couple of weeks, though, she still wasn’t sold. She tried uploading a handful of comedy videos, but the genre, while popular on TikTok, wasn’t quite her jam.

So she gave another popular trend a shot: dance challenges.

This is where Harrison comes in. Brooke’s first dance video was a siblings remix challenge–and that required Harrison to star as her counterpart in the routine. The duo filmed the video at 3 a.m., Brooke uploaded it the next day, and within 24 hours, the clip had over a million views.

Brooke knew they had something. She and Harrison began filming videos together regularly, and when she told Harrison exactly how many millions of views their videos were driving for her TikTok account, he joined the platform, too.

While neither 17-year-old Brooke nor 15-year-old Harrison had intended to become rising-star creators, they were no strangers to the spotlight. The siblings are both trained dancers, and have acted in everything from theater to commercials to movies and television. Brooke’s most recent role was in Dixie D’Amelio-fronted Attaway General, and Harrison just featured in Amazon Prime‘s The Kid Who Could Only Hit Homers.

Once Brooke and Harrison realized TikTok could be the next evolution of their entertainment careers, they began creating steady streams of content, focusing on dance challenges and filming (separately and together) in bright, eye-catching locations. Over the past month, Brooke’s content has amassed more than 175 million views, with an average per-video view count of 3.1 million and an average per-video like count of 421,000. Her follower count has grown by more than one million in the past 90 days, bringing her to 11.5 million total.

Harrison, meanwhile, has grown his account to 1.8 million followers, with a collective total of more than 50 million likes.

Brooke and Harrison’s growing presences on TikTok have already opened doors to professional opportunities like performing with the Chainsmokers, Jason Derulo, and Jordan Fisher, and working with brands like Invisalign and KFC. More developments are largely under wraps, but Brooke says she’s working on breaking into singing/songwriting, and Harrison says viewers might want to keep an eye out for potential merch in the near future.

Tubefilter: Tell us a little about the both of you! Where are you from? What did you get up to before joining TikTok?

McKenzi: Hey y’all, my name is McKenzi Brooke. I’m originally from South Florida. Before launching my TikTok channel, I was dancing and acting full-time. I’ve been dancing for over eight years and acting in movies, theater, television, and commercials for almost nine years. Recently, I had an amazing experience on Attaway General.

Reif: Hi, my name is Reif Harrison, and I am originally from South Florida. I’ve always loved sports (baseball and basketball especially)! I also have been professionally dancing for eight years and acting for seven. My last project was The Kid Who Could Only Hit Homers on Amazon Prime.

Tubefilter: When and why did each of you join TikTok? Did you join kind of knowing the sort of content you wanted to make, or did you discover your niche along the way?

McKenzi: This is a funny and unusual story, but I actually started TikTok because of my mom. My brother Reif booked a TV show on Nickelodeon called Lip Sync Battle Shorties. The hosts were JoJo Siwa and Nick Cannon. The show was shot in L.A., and I wasn’t allowed on set :(. So my mom gave me three options or I would have to go back home. My three options were No. 1 read a book, No. 2 go to a dance training, and last but not least No. 3 was to start a TikTok channel. You guessed it! TikTok.

At first, I wasn’t interested at all, but after the first two weeks, I loved it! I first started posting comedy videos. But one day at 3 a.m. (no joke), I asked my brother if he could do a dance challenge with me called “the Max and Ruby Remix”! This was gonna be the first dance I ever put on my channel. We ended up making our dance to it. I posted it the next day, and it got over a million views. From that day on, I decided to add dancing as well to my channel.

Reif:  My sister was on TikTok way before I was. One day, after one of our rehearsals, we stopped off at Walmart. McKenzi had been hitting me up from time to time to jump on TikTok, and this time was no different. She told me about her videos going viral, and for the first time I was intrigued. Together we made up a dance, and I’ve been nonstop ever since.

Tubefilter: You each have your own account on TikTok, but of course feature in one another’s videos pretty frequently, and you share a YouTube channel. How does your collaborative creative process go? How do you come up with ideas together?

McKenzi: I’ve been very lucky to have a brother who’s great at bouncing ideas off. Usually one of us will think of an idea, and then we just see how we can make each other’s idea better. Sometimes my mom and dad even help us out with ideas.

Tubefilter: Walk us through what goes into an average video. Do you script? How much editing do you do? How do you choose filming locations?

McKenzi: Every video that I/we do always has a different setup. It all depends on the video idea and who is part of the collaboration. But for the videos, the most important piece is the lighting. If I’m creating inside, I usually use ring lights, but if I’m in public/outside, I have my go-to square light that I bring everywhere.

Reif: For our dancing videos, once we feel like we have the routine down…we just GO FOR IT! We do like to film outdoors, but when we do film inside, we usually film in my room. Because, of course, I have the best room in the house!

Tubefilter: When and how did you decide to start a YouTube channel for your short-form content? What role has YouTube Shorts played in the growth of your channel (and career)?

McKenzi: We partnered with The Network Effect to officially launch our YouTube channel in May of 2020. Diversification is important to us, and the launch gave us a chance to create long-form videos ranging from dance tutorials, to comedic sketches, to behind-the-scenes. We just started to double down on YouTube Shorts as well, and will continue to create all styles of content for YouTube moving forward.

Tubefilter: Your following on TikTok has seen some major growth lately. Is there any one video that really popped off and drew in a big audience? Or has your growth built up across numerous videos?

McKenzi: Creativity is so important to us. We always try to post numerous videos every day, with different styles of content! That has been the key for us!

Reif: I hope people take both laughter and enjoyment from the content we create. Being able to make others smile makes me smile. I really hope that our videos are making people happy.

Tubefilter: How has your personal brand grown over the past few months? Have you gotten any cool sponsorships or other opportunities thanks to your digital presence?

McKenzi: Recently I’ve gotten out of my comfort zone and expanded into the world of music and singing. It’s something that I am so excited to share with my audience. Regarding sponsorships/campaigns, we have had the privilege of working alongside the likes of Invisalign Aligners, Joby, KFC, and many other amazing and cool brands.

Reif: And one of my favorite experiences that we had was getting to perform on the Chainsmokers tour date in Orlando. Absolutely SURREAL!

Tubefilter: Due to your recent growth, do you have any new plans or goals for your content career? Do you think content will be a full-time pursuit for you long-term?

Reif: Social media continues to open amazing doors for us. Personally, my dreams/goals are to continue to pursue acting and music. I will always love to dance; it’s how this all started, and it is what I love to do.

McKenzi: Honestly, my favorite part about making content (other than it’s a lot of fun) is that I’ve gotten to make new friends along the way and make content with my brother. We also take pride in inspiring kids/teens. We get to see people’s comments where they say, “You inspire me,” because I feel the same way where our audience inspires us.

McKenzi: We have lots of exciting things planned for everyone! For starters, I’m coming out with my OWN MUSIC!!! I wrote it myself, and I’ve been waiting to release it for y’all to hear. It’s almost time! 😆

So where do I see myself in the next five years is continuing to write my own music and putting it out for everyone to hear!! I also dream to have my own fashion or makeup brand!

Reif: We also have a couple ideas about merch, but I think we might keep that a secret for now. Hopefully you will find out soon!! We also have music coming out together! 😊

Where do I see myself in five years…As the lead in a Marvel movie…of course!