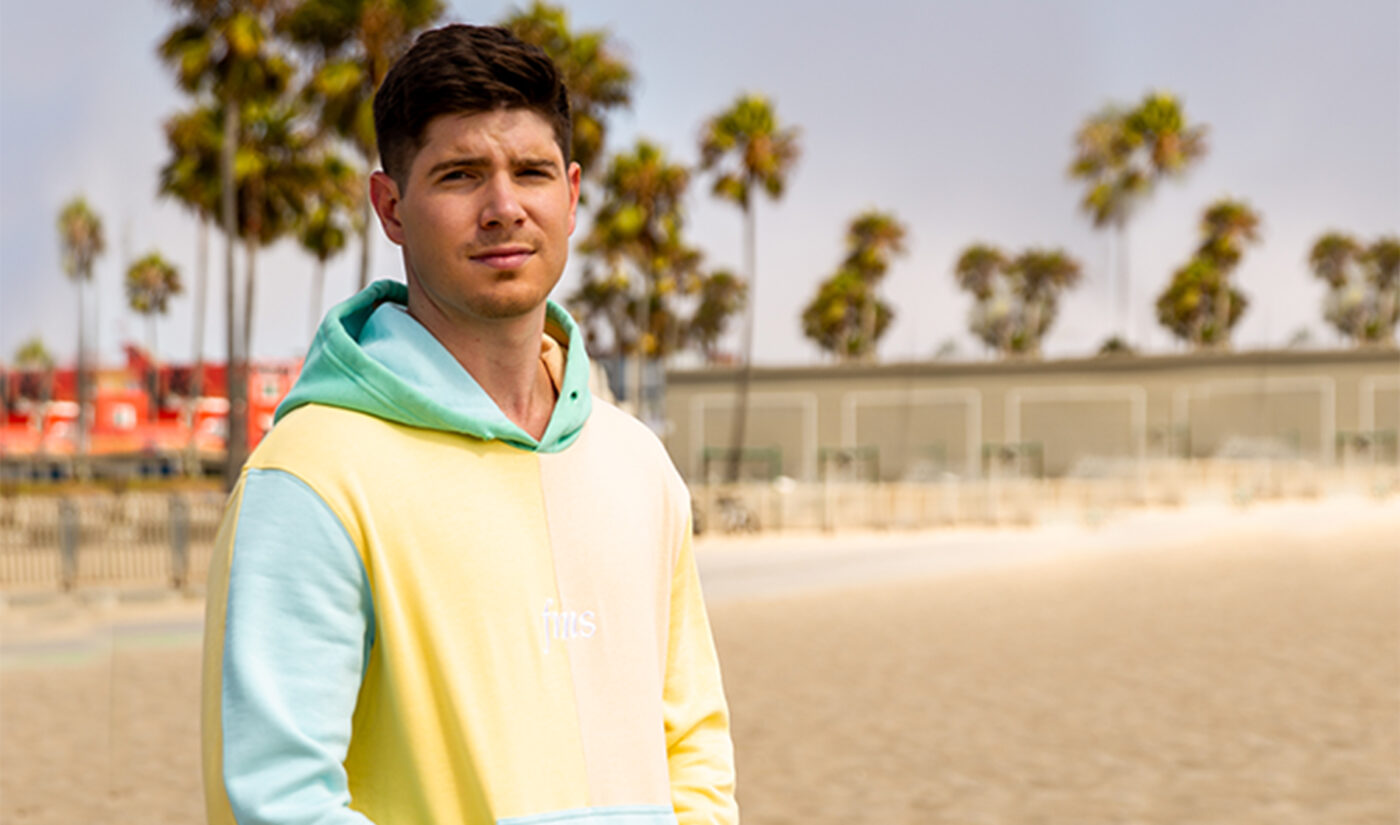 His father’s side of the family is full of them, from “Greenfield” Jimmy Smith, who won the 1919 World Series as an infielder for the Cincinnati Reds, to Billy Conn, light heavyweight world champion and member of the International Boxing Hall of Fame, to 2016 Olympic medalist swimmer Leah Smith.

Spending his entire life surrounded by people who love (and excel at) sports inspired Smith to become a well-rounded competitor, too. As a kid, he tried “almost every” sport, and found particular favor with basketball and golf, he says.

But while sports are an enormous part of who Smith is, they’re not his only interest: from his mother’s side, he picked up a passion for making art. In between middle school practices and games for the variety of sports he played, he wrote, filmed, and edited creative short skits with his brothers and posted them on his first YouTube channel, started in 2008.

However, like many young creators, he found the internet to be less than receptive, and his videos didn’t garner much attention. So, shortly after, he switched tactics. Instead of producing a skit, he cut together a “greatest hits” montage of one of his favorite athletes, set to a popular song.

And that? That got views.

Fast-forward a decade, and Smith’s content, though much more polished, isn’t much different.

He joined TikTok in April 2020, and promptly began sharing one-minute-long, jazzily edited clips about anything and everything to do with top athletes and the sports industry as a whole. Want to know where top football coaches are made? He’s got you. Giannis Antetokounmpo‘s rise to fame? Right here.

To date, Smith’s daily sports coverage (which includes on-camera appearances and original voice-overs from him, plus background songs and brightly colored, eye-catching thumbnails) has netted him 1.2 million followers and tens of millions of views on TikTok.

That viewership, he says, has already been surpassed by his burgeoning YouTube channel. 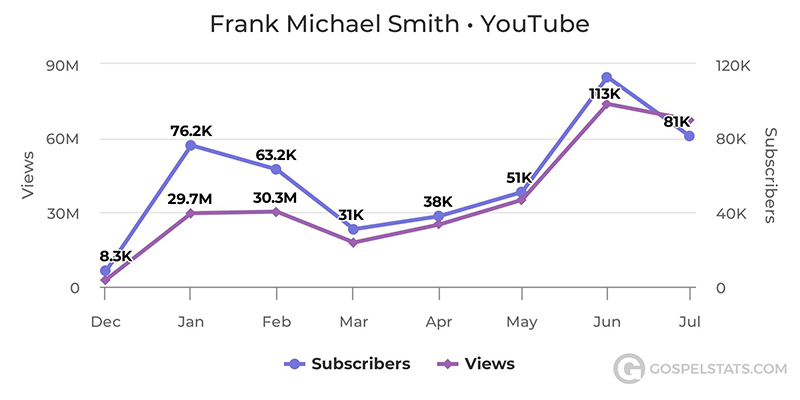 Smith says YouTube Shorts has been instrumental in his channel growth. Here’s his monthly YouTube viewership data from Gospel Stats.

Smith had been uploading to his YouTube channel for around six months before YouTube’s TikTok competitor, Shorts, debuted. The new vertical, he says, was a game-changer: suddenly his shortform content, which was cross-posted from TikTok and hadn’t been getting much attention amidst all the long-form videos YouTube’s known for, were drawing serious traffic.

Not long after Shorts’ debut, Smith’s channel went from nabbing a few thousand views a month to, in January 2021, bringing in 29 million. Since then, he’s consistently seen at least 20 million views per month, with a major spike to 74 million in June.

Shortform content has been the foundation for Smith’s growth as a creator, but he’s got ambitions to balance his bite-size bits with longer projects, including full-length documentaries about the sports he so loves.

Tubefilter: Tell us a little about you! Where are you from? What made you fall in love with sports?

I was proudly born and raised in Pittsburgh. A tough city with a rich sports history dating back to the days of my great grandfather, “Greenfield” Jimmy Smith. He worked his way to the Major Leagues and won the infamous 1919 World Series as a member of the Cincinnati Reds. His son-in-law, Billy Conn, became light heavyweight champion of the world 20 years later.

Sports have been an integral part of my family since I can remember. Watching, playing, analyzing…At six years old, I was positive I wanted a career in sports. As a kid, I played almost every sport, even weird ones like karate, but focused on basketball and golf as I grew up.

My mother’s side was highly artistic. My grandfather and aunt are both accomplished artists and inspired me to think creatively about sports.

I went to public high school in Pittsburgh before graduating Miami University with a degree in interactive media.

Tubefilter: When and why did you decide to start making digital content? What was your first platform? Did you start your channel with an idea of where your content was going to be headed, or did you discover that along the way?

FMS: In 2008 (8th grade), I started my first YouTube channel. As kids, my two younger brothers and I produced short stories on a VERY primitive camera and software called Digital Blue. I rarely appeared onscreen, but always dictated the plot, filmed, and edited. When YouTube launched, posting our videos was a no-brainer.

These received almost no views. Soon after, I realized creating videos centered around target searches allowed me to be seen. I downloaded Windows Movie Maker and edited my first “highlight mix”–a compilation of a well-known athlete’s greatest moments set to a song. I didn’t start this journey for any other reason other than curiosity, passion, and how rewarding it felt to have your work seen by thousands of strangers online. I had no idea where it was headed, but all of my work (no matter how painful it is to watch today) led me to the present.

Tubefilter: You currently post daily content across multiple platforms–so you must have quite a workload. Walk us through the average day!

FMS: When I started my TikTok page in April of 2020, I was doing every step myself. Writing, recording, editing, publishing, and promoting–a true one-man show. Today, I spend my days collaborating with my small team. We write, edit, and promote together. I know many successful business leaders promote a daily routine, but I haven’t found this to be a viable solution. Every video is different, meaning every day is different. Sticking to a routine would cripple my ability to discover creative solutions for each video.

Tubefilter: You had some major viewership spikes on YouTube this summer. What caused those? Did YouTube Shorts factor in at all?

FMS: YouTube surpassed TikTok as my top platform for viewership six months ago. This is almost entirely thanks to Shorts.

Tubefilter: How has your personal brand grown over the past few months? We see you launched a hoodie, and you’ve had a bunch of engagement from sports teams, players, and other entities in the industry. Has this resulted in any professional opportunities for you?

FMS: Fostering a relationship with my followers/subscribers has been a major focus since I started. I’m constantly chatting with them in the comments, DMs, and wherever else is made possible.

When I decided to wear the same hoodie in every single video, it wasn’t a fashion statement. It was because I was filming and releasing one video every single day and I didn’t have time to curate so many outfits. It became part of the show, and I later released merch from it.

I’ve worked with many great brands such as Under Armour, eBay, EA Sports, Rocket Mortgage, and Underdog Fantasy. However, a huge one is coming very soon–one all sports are undoubtedly familiar with.

FMS: To be honest, I don’t like using the word “content.” Sometimes I’m forced to because it’s industry jargon, but what I’m creating isn’t content…it’s art. My favorite part about creating art is releasing and witnessing the reaction of all of those who follow along.

FMS: I’ve been full-time since May of 2020 and my next challenge is building out my YouTube Live show. I’ve proven to be a league leader in shortform. Now I have to prove I can play on the other side of the field as well.

My true value lies in the art of storytelling. I’m a talented writer, video editor, narrator, and host, but most importantly, I understand the arc of a story and how to communicate it to an audience without their interest. In five years, I’ll be taking on much larger and more impactful projects, like feature-length documentaries. I’ll license them to platforms like Netflix, Hulu, HBO, and Amazon Prime.