Creators On The Rise: Hannah Montoya Turned TikTok Into Her Theater—And Now She’s Bowing On YouTube 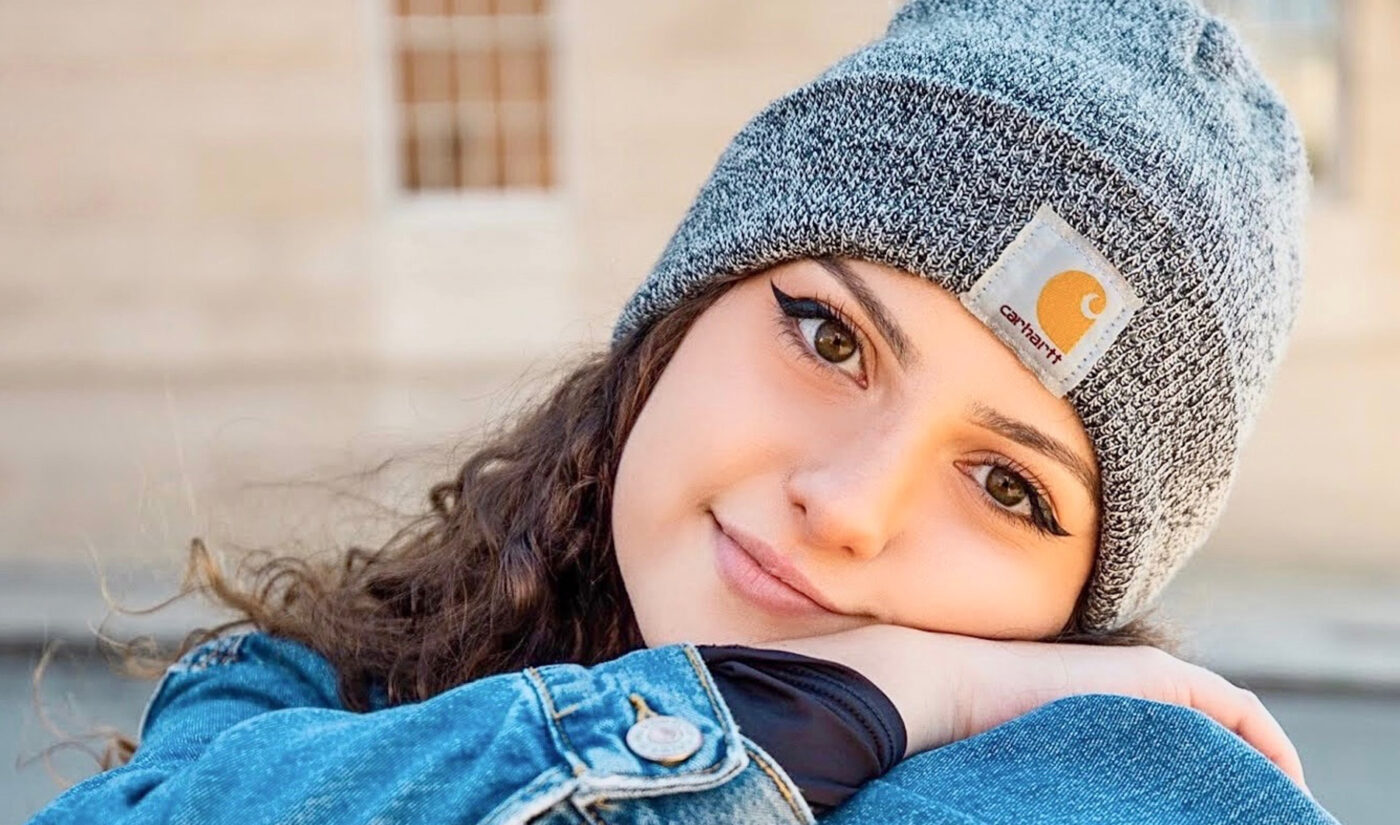 Hannah Montoya loved theatre, but it didn’t love her back.

Or, at least, that was how it felt.

Montoya had always dreamed of being onstage, but when she began taking long-awaited theatre classes in high school, the atmosphere was harsher than she’d expected. It took such a toll on her, she says, that she lost nearly all belief in herself and her skills as an actress.

That was when she turned, first, to her vocal coach, who helped rebuild her confidence, and second, to TikTok.

For as long as she’d been an aspiring actress, Montoya had also been an aspiring content creator. At ten years old, she began sharing her labors of love–that is, her self-described “terrible” comedy sketches–on her dad’s YouTube channel. After each upload, she imagined she’d go viral, netting tens or even hundreds of thousands of views for her painstakingly scripted and filmed productions. But her videos were lost in YouTube’s seemingly endless sea of content, and never garnered more than a handful of views.

Years later, on TikTok, it was a different story.

Montoya “played around” on the shortform app for about a year, using it to build a community and help rekindle her passion for acting, she says. Then, in late 2020, she introduced Aunt Jackie, a character chock full of bold, brash New Jersey energy (with a spot-on accent, to boot). Her first Aunt Jackie video netted more than 100,000 views overnight–exactly the instant takeoff her younger self wished for.

With Aunt Jackie’s success in mind, Montoya developed a range of characters based on popular and/or memeable archetypes (the “pick me” girl, the high school senior, and the queen bee, for example). These characters and their (mis)adventures have helped push Montoya’s account to more than 3.8 million followers, with her videos netting, on average, 4.8 million views each.

But, of course, Montoya didn’t stop at TikTok. 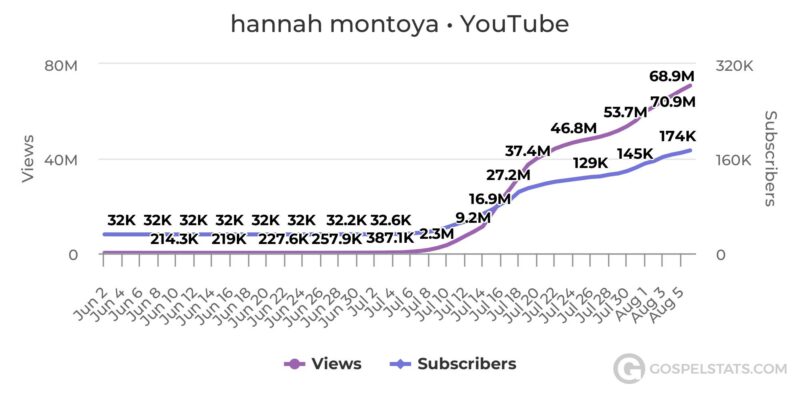 Montoya’s channel took off after she began uploading her TikTok content to YouTube Shorts in May. Monthly viewership data from Gospel Stats.

Having established herself on that platform, Montoya returned to YouTube in May. Her strategy? Crossposting some of her top TikToks to YouTube’s shortform competitor, Shorts, in the hopes that they would find a similarly enthused audience.

Since then, Montoya has uploaded around 120 videos, which collectively have boosted her channel to 190,000 followers and 75 million views. Montoya says this early response is encouraging, and sees it as a potential foundation for her to go back to her roots and begin uploading the kind of long-form sketches that made her fall in love with content creation.

Tubefilter: Tell us a little about you! Where are you from? What did you get up to before rolling onto TikTok and YouTube?

Hannah Montoya: Hi! I’m Hannah! I’m from Rockford, Ill., spent a few years in Charlotte, N.C., but am back in Illinois again! Growing up, I was into a lot of things: volleyball, art, singing, and theatre.

Tubefilter: How and when did you decide to start making content on TikTok?

HM: To make a pretty long story short, I went through a rough patch in high school, primarily involving theatre. The environment was harsh, and through the experience, I lost almost all confidence and belief in myself. Fortunately, there are really great and supportive teachers out there. I was more than lucky to have met my voice instructor outside of the school, who helped build me back up and inspired me to keep going. That was about the time when I started creating content on TikTok as an outlet. It immediately became such a source of support and positivity. It couldn’t have come at a better time. To this day, my followers on all platforms continue to be so uplifting.

Tubefilter: A lot of your content chronicles the (mis?)adventures of people archetypes like the pick me girl, the nice guy, the cool aunt…How did this become your “thing”? Did you always intend to make this kind of content, or did you kind of fall into it?

HM: I absolutely love comedy. When I was little, I would write these terrible sketches and upload them to YouTube, or force my friends to star in a DIY play in the neighborhood. I was ridiculously annoying about it. But it’s always been something I have loved and intended to do. I think people are inherently funny, and I take inspiration from everyone I meet.

Tubefilter: When did you “take off” on TikTok? Were there specific videos that really seemed to go viral and draw lots of attention to your accounts?

HM: After playing around with TikTok for about a year, I made the “aunt from New Jersey visits for Thanksgiving” sketch. I posted it at night, woke up to 100,000 views, and absolutely freaked out. I remember shaking from excitement and calling my parents immediately. Now my parents are astounded that my average video on TikTok gets 4.8M views. From that exact point on, Aunt Jackie has become a regular character. I have had so much fun working on and continuing to develop her and other characters.

Tubefilter: As for YouTube, why did you decide to launch a channel there? Is the content you’ve uploaded there the last three months new videos, or crossposts from TikTok?

HM: I have had my specific YouTube channel since I was fourteen, and even had another one before that. When I was around ten years old, I would log into my dad’s account and upload sketches, praying that they’d take off, and they’d max out around five views. Now, I’m beyond thankful that they didn’t take off, because they’re extremely embarrassing. Most of my YouTube content is shortform and cross-platform, but I am hoping to regularly upload long-form sketches in the future!

Tubefilter: What role has YouTube Shorts played in the growth of your channel? Do you think Shorts offers creators advantages that YouTube main doesn’t? What is it like in terms of attracting views/subscribers vs YouTube main? Is it easier? What other perks does Shorts offer?

HM: YouTube Shorts has completely revamped my channel, and it has been amazing!! I have prioritized YouTube a few times before, and never truly had anything take off until I started uploading Shorts. The platform was always very intimidating to me, but it feels less daunting making shortform. Not only has it helped with growth in subscribers and views, but it offers me a completely new way to engage with people in a different, more intimate manner. I love it. I do intend on posting regular long-form content, and currently have some very exciting surprises in the works.

Tubefilter: Can you talk a little bit about your production process? How long does it take you to create the average video? How many videos do you make per day/per week? Is there a specific upload schedule you try to adhere to?

HM: I try my best to adhere to an off-day, on-day type of schedule. I write and upload videos on different days, which has definitely helped me stay consistent with posting. One day is a writing-designated day where I mock up a few scripts, and try to set up a scene or create a new character. The next day I shoot, edit, and upload. It takes a bit longer, but I have so much fun doing it.

Tubefilter: Why does making short videos appeal to you?

HM: Currently, I am loving shortform! There’s something so much less intimidating to me about uploading a short video versus one over three minutes or so long. Eventually, I want to work in a sort of mixed format, with both short- and longform POV/sketch content.

HM: My management at The Network Effect has helped me so much with staying up to date with content, best practices, and monitoring growth and engagement. Social media has definitely changed a lot in my career for the best. I am currently pursuing my major in digital marketing with a minor in theatre, and able to see firsthand what I am learning in school. That in itself has been amazing!!

HM: Ultimately, my favorite part are the comments. The community I am surrounded by is the absolute best. It has been amazing meeting supporters, and making friends in the process.

HM: For my immediate future, I have some new characters I have been working on and I am very excited to introduce them! I am planning on staying consistent with posting on all platforms, and beginning to conceptualize longer video sketches for YouTube. In terms of the long run, I hope to pursue comedy and acting! It would be a dream come true. I’m currently taking classes at The Second City in Chicago, and I hope to continue down that same path.