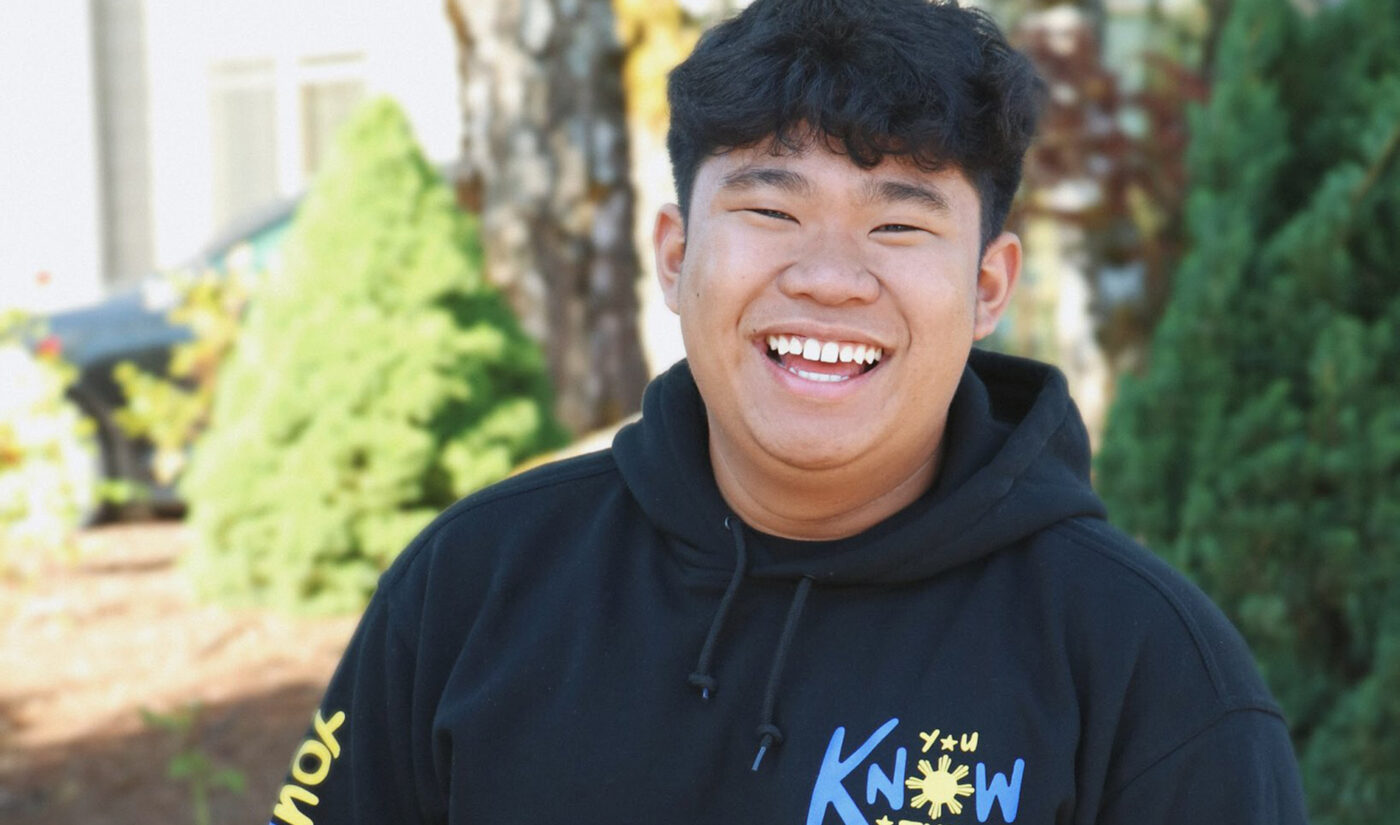 Being in the spotlight is never as effortless as magicians make it look–and if anyone knows that, it’s Sean Canto Sotaridona, aka SeanDoesMagic.

The 19-year-old sleight of hand specialist has been performing all manner of magic for live audiences since he was a kid. Over the past decade, he’s mastered dozens of maneuvers, from making cards disappear (and change colors, and shapeshift) to “mind-reading” to convincing Oreos to double stuf themselves. As a young magic enthusiast, he became comfortable presenting his ever-growing trove of tricks for family, friends, and occasionally onstage for strangers.

But Sotaridona always felt his biggest audience awaited on YouTube. He just couldn’t quite reach them.

Like many millennials and Gen Z’ers, Sotaridona grew up watching creators like OG YouTuber Ryan Higa, and dreamed of having a digital career. When he first launched a YouTube channel in middle school, he hoped the short magic videos he filmed on an old handheld camera would take off like Higa’s antics had–but no luck. Eventually he put a pause on his YouTube aspirations and switched to Instagram, where his short clips had more success: within a year on the platform, he’d netted 80,000 followers (he’s now up to 480,000).

Then TikTok came along.

For Sotaridona, the app was a perfect fit. He set up an account in early 2019, and within two months, had amassed one million followers with the kind of short content he’d hoped would find viewership on YouTube.

We here at Tubefilter actually chatted with Sotaridona in September of last year, after his TikTok account hit 15 million followers (he’s now at 18.3 million). During our conversation about his TikTok success, Sotaridona revealed though he was happy to be building an audience on TikTok, he hadn’t given up on YouTube. He still felt that it was the platform for him, and still believed that one day, he’d flip over the right card or pull the right rabbit out of the right hat and finally click with YouTube viewers.

In February 2021, that’s exactly what happened. The right rabbit turned out to be YouTube Shorts.

That month, Sotaridona returned to YouTube exclusively to upload content to Shorts, anticipating that folks might be more receptive to shortform content. He began making Shorts clips in the first week of February; at the time, his channel had around 280,000 subscribers and netted fewer than five million views per month.

Between February and now, Sotaridona grew his channel to 2.8 million subscribers and more than 870 million lifetime views–and, he says, it’s all thanks to YouTube Shorts.

Tubefilter: When we last spoke, you’d just hit one million followers on TikTok, and had just decided to focus more on YouTube. You’re now at nearly 3 million subscribers on YouTube. What happened these last nine months? Catch us up!

SeanDoesMagic: Since the last time we spoke, I’ve been super blessed with my recent channel growth. A lot of it has to do with YouTube’s brand-new feature, YouTube Shorts. Shorts is YouTube’s take on the new shortform content wave, featuring vertical videos under 60 seconds. I was able to hop on the new feature early, rapidly growing my channel from 200K all the way to 2 million in just about a month or so.

Tubefilter: For those who don’t know you, tell us a little about you. What’s your name? Where are you from? What do you get up to outside of YouTube and content creation?

SDM: My full name is Sean Canto Sotaridona. I was born in Enschede, the Netherlands, after my dad found a job there from the Philippines. We shortly after moved to the United States, where I was raised. I was a very extroverted kid and I loved to entertain others. When I was only six years old, I found a love for magic. I would buy magic kits, DVDs, special props, and gimmicks to learn and develop at a young age. By the age of twelve, I was doing street magic and even some stage shows.

SDM:  I started my YouTube channel in March 2012, at a young age of only 10 years old. I grew up watching the OG YouTubers such as Ryan Higa, and I instantly fell in love with the platform. Soon I found that there was a magic community on the platform I already loved. This is where I was inspired to create my own magic channel and produce my own videos using an old handheld camera.

As I grew older, I never stopped my love for both magic and for filming videos. By the end of my middle school years, I found a new platform called Instagram. I posted some of my magic videos there, and by the end of 2018, I had over 80,000 followers. The beginning of 2019 is when I posted my first ever TikTok, and within the first two months, I had grown an amazing community of over one million friends and fans.

Tubefilter: Your channel has recently seen a big boost in views and subscribers, which–as you mentioned–has a lot to do with YouTube Shorts. Do you remember which of your Shorts was the first to go viral? Are there any that have been particularly popular and really driven people to your channel?

SDM: The first time I posted a YouTube Short was around February 2021. I had recently heard that a lot of people were finding early success within the brand-new feature on YouTube, and as someone who has already created a ton of shortform magic content, I was quick to hop on.

My first short was titled, Girl is AMAZED during Magic Trick (Omegle Best Moments), in which I did a magic trick to a random spector on the internet. Within the first week, that video blew up and grew to over 700,000 views. From there, I started taking a lot of my shortform content from TikTok and sharing it with my YouTube audience. Soon, every single Short on my page was growing between one and 10 million views a video.

Tubefilter: What impact has YouTube Shorts had on your channel and its growth? Is there anything it offers you and other creators that YouTube main doesn’t in terms of finding viewers and growing your audience?

SDM: YouTube Shorts has had a huge impact on my growth in my channel. Prior to YouTube Shorts, I was trying to find my footing again on YouTube, and I was struggling to maintain growth–but with the ability to include shortform content as well as long-form content on my channel, it’s really opened up a whole new audience to my page.

Tubefilter: How does YouTube Shorts differ from TikTok, in your experience? Is it easier to go viral? Are there certain things about Shorts you like better than TikTok, or vice versa? Are you focusing more on YT or TikTok right now–or both?

SDM: There really isn’t a whole lot of difference between TikTok and YouTube Shorts. Both are categorized under 60 seconds and both feature vertical videos. I think the biggest difference is that, as a creator, I now need to focus on marketing a title for YouTube
Shorts, because unlike TikTok, Shorts require a title. But in terms of what I’m focusing more on, they’re both shortform content and a lot of the content stays the same between the platforms, so they are equal in my eyes.

SDM: The recent engagement definitely has helped bring a new audience to my channel, but it hasn’t changed much for me. I’ve already been a full-time content creator for the last two years, and the ultimate goal and vision for this year has been the same: to continue to expand my audience and spread the joy of magic to as many people as possible. Whether that’s on TikTok, Instagram Reels, Snapchat, or now YouTube Shorts–as long as I’m able to expand my audience and spread the love, that’s all that matters.

SDM: What I love the most about creating content is the idea that I’m able to positively impact millions of people simply by spreading the joy of magic. Something I create can genuinely make someone’s day better, and that is one reason why I absolutely love creating content.

SDM: Some exciting things that are coming up is that we are currently working on a new magic show; it’s been in the works for a few months and we are so excited to finally share it with the world! In terms of long-term goals, like I said, I’m working on continuing to spread the love and joy of magic. But aside from that, I would also love to get into the
world of acting and hosting; and it would be the ultimate goal to host the Oscars one day. However, we’re taking it one step at a time, one year at a time, and I am very happy with where I am today.

SeanDoesMagic is represented by Collab.