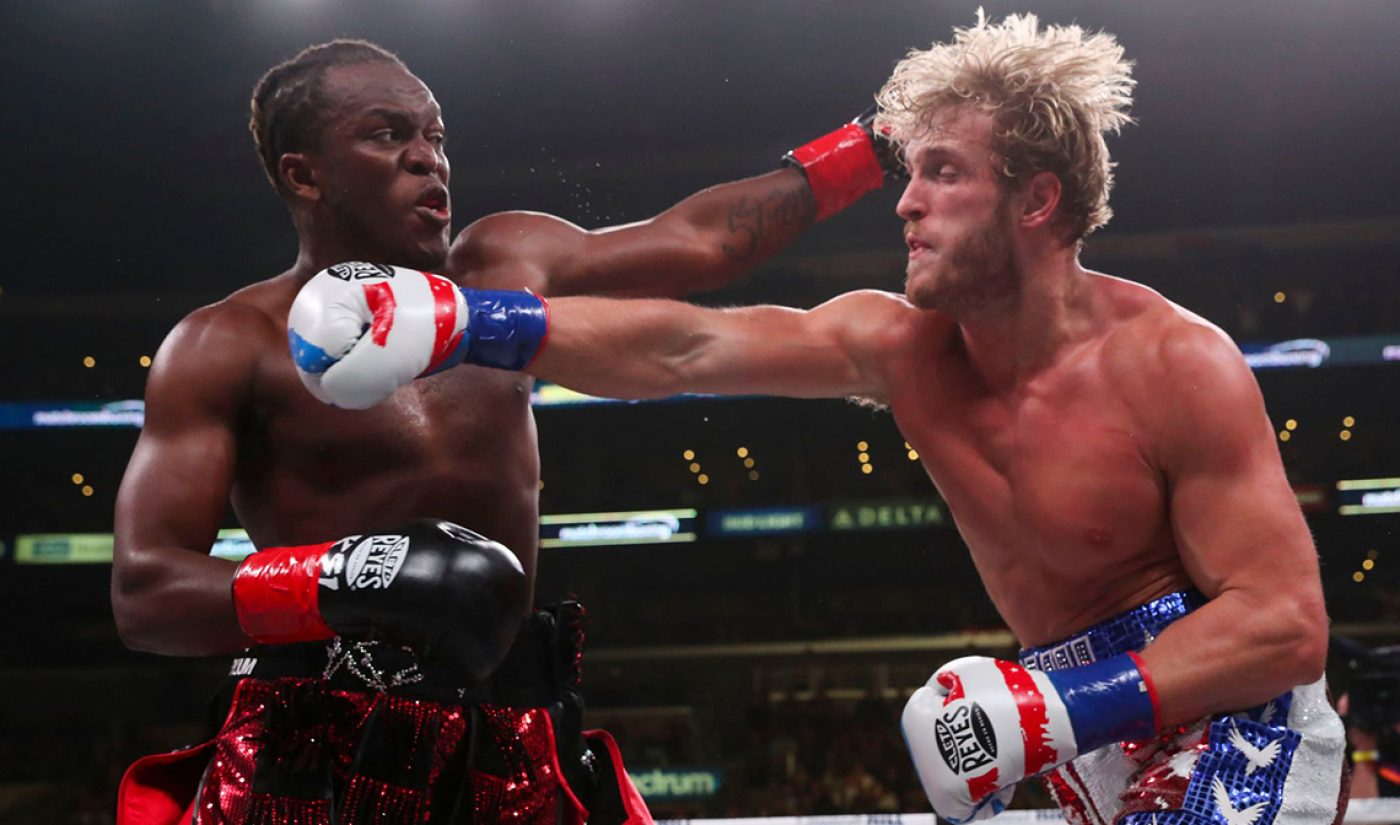 Once again this past weekend, millions of lucky internet users were treated to the rich pleasures of watching someone punch Logan Paul in the face. Perhaps we should have declared a national holiday so all could enjoy.

The occasion this time was an “exhibition” between Paul and one of the greatest boxers of all time, the now decidedly past his prime Floyd Mayweather, who’s also 44 and, technically, retired.

Nonetheless, the two part-time pugilists climbed in the ring to bash on each other, doing little enough damage that both could climb back out. Indeed, as an exhibition, no judges scored the fight, and no winner was declared.

As Tubefilter reported this week, more than a dozen sponsors backed the event produced by a Cameo competitor called Fanmio and companies owned by Paul and Mayweather.

Online, where’d you expect an event featuring a prominent influencer/huckster to do well, it created a mini-industry of media, generating some 326 million views from 9,400 YouTube uploads, according to Tubular Labs.

Most importantly for the bottom line, though, Showtime Sports streamed the event as a pay-per-view for $50 a pop. A few days after the fight, Mayweather said the PPV stream generated a whopping $300 million.

Even before the fight, Mayweather was boasting that he’d already made $30 million in what he called “legalized bank robbery.”  As Mayweather went on to say, “…that’s not bad for a guy that’s retired.”

No, indeed. Wonderful to see one of the sport’s greatest champions put a little nest egg aside for his old age, which for boxers often arrives far sooner than they expect. Also, Mayweather punched Logan Paul in the face.

But with that kind of money floating around for “exhibitions,” perhaps it’s not surprising to see influencers make like pro boxers and increasingly opt to climb in the ring too. The money’s big, the stakes are small, and it’s a chance to generate new fans, sponsors, and business deals.

That’s why Robert Ellin, the founder and CEO of LiveXLive Media, told me this week that we should get ready for a lot more such events (including his own).

As the money generated by the Paul-Mayweather event suggests, fans are increasingly getting into live events that mash up celebrities, sports, and music–and not just with boxing, where there are occasional potential downsides like dying. But the fights aren’t anything like the level of intensity Mayweather brought in his professional career.

“For our kids, this is fun, this is Disney, this is Wrestlemania,” Ellin said. “They’re not claiming to be the next great boxing star. It’s a show, and you’re going to see, I think this is going to be the beginning.”

Soon to come, Ellin said, are more kinds of crossover events like the basketball league that features hip hop stars, and celebrity car races. And it could revive American interest in boxing, which has been down for the count as mixed martial arts and even pro wrestling grabbed far more attention among younger fans of combat sports. 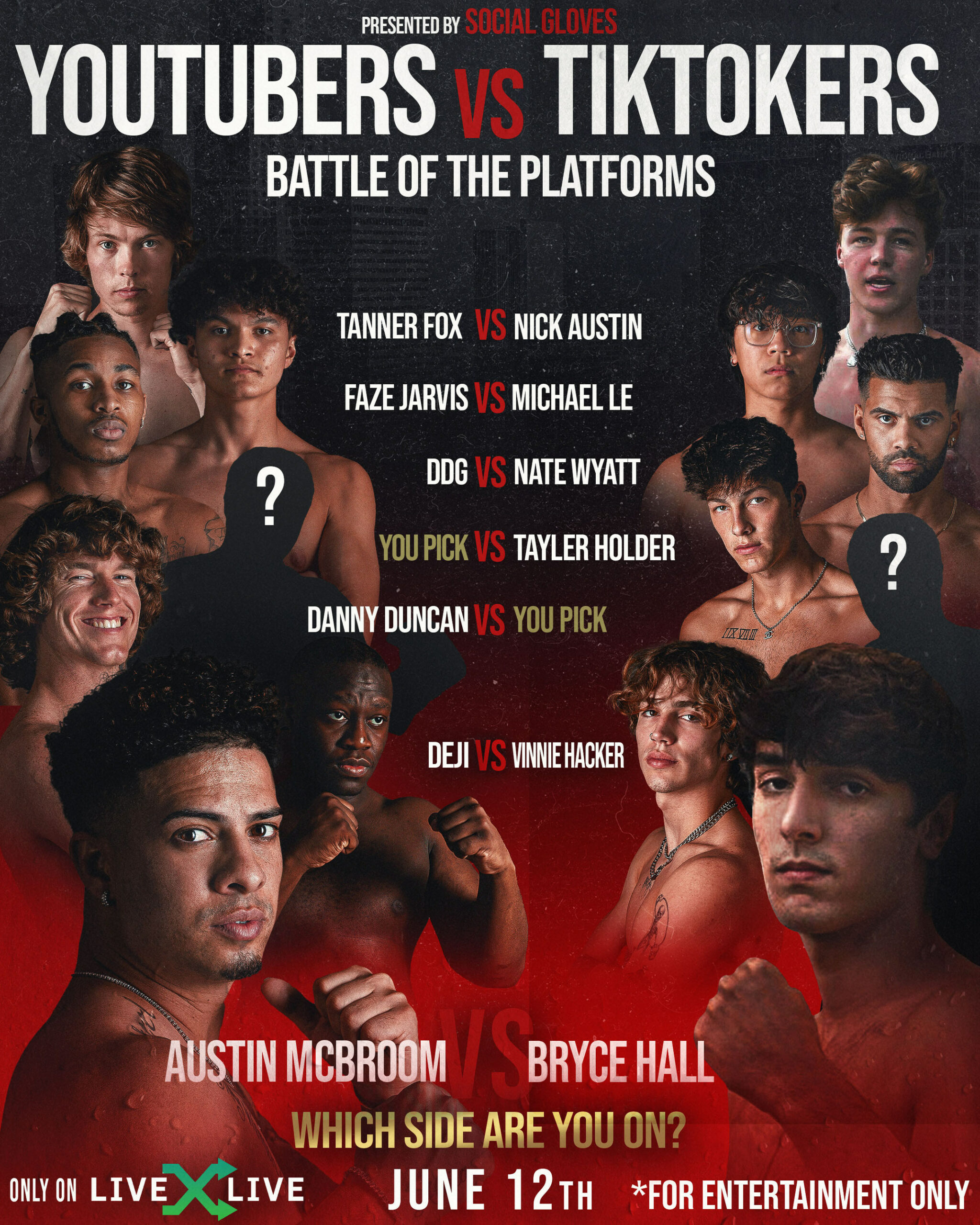 LiveXLive will produce and stream this Saturday’s Social Gloves: Battle of the Platforms, featuring seven fights between influencers/amateur boxers mostly from TikTok and YouTube.

The event is intended to be the first in a series of Social Glove PPV boxing and music events in conjunction with Hard Rock Café, which is streaming the event to its resorts and restaurants, and co-creating merchandise.

And no surprise, given recent crypto craziness, Social Gloves signed a partnership to create licensed non-fungible tokens, or NFTs, tied to the events, beginning with digital trading cards of family man McBroom and teen idol Hall.

Of course, even as influencers move into sports and competitions far from what made them Online Famous, some things haven’t changed, like jerky behavior from a Paul brother.

In a May media event, Mayweather scuffled with Logan Paul’s brother Jake when he grabbed Mayweather’s hat, and reportedly also talked trash about the mother of Mayweather’s children, who had recently died. Little surprise the G.O.A.T. took offense.

“There’s a difference between respect and disrespect,” Mayweather said. “Untying my shoe, my children’s mother passed away last year, talking about her, touching my hat…It’s all about reciprocation. Treat people like you want to be treated.”

That sounds about right. So, let’s treat the Pauls the way they want to be treated. Can we just arrange for people to punch them in the face every day? The pay-per-view take would be huuuuge. And it seems like just the sort of spectacle the internet really needs.