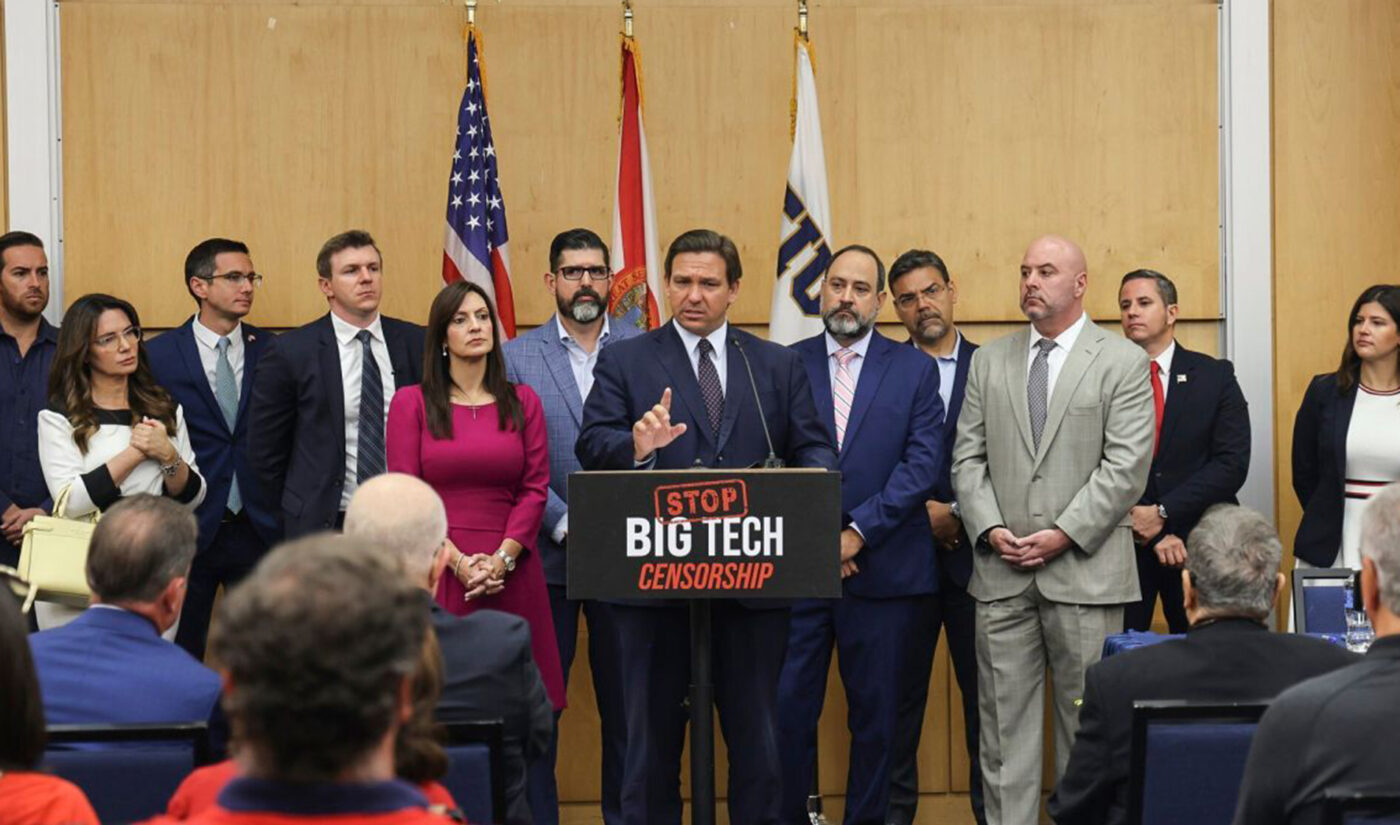 There they go again, those wacky Florida politicians, the same wayward flock of silly geese and knuckle-dragging knuckleheads who introduced “butterfly chad” to the American electorate. These days, the herd continues to produce some of the dumbest stuff elected officials do in the name of really lame political posturing.

This time, it’s a just-signed law that would prevent social-media companies from “deplatforming” political candidates no matter how thoroughly the pols trample on community standards, terms of service, legal requirements, or other niceties.

Conservatives hate getting kicked off the bully pulpit that is social media, especially just when they’re launching into a libtard-owning stemwinder that might incidentally also be racist, hate speech, obscene, scientifically false, or otherwise deeply offensive and against the platform’s rules.

In response, Florida’s legislature and its opportunistic Gov. Ron DeSantis came up with a statute so thoroughly dopey and deeply unconstitutional that it’s unlikely to survive even the barest of judicial scrutiny.

Whatever parts of the statute that the U.S. Constitution doesn’t block, and that’s a lot, the so-called “safe harbor provisions” of Section 230 of the Communications Decency Act almost certainly will prevent.

But, as A. Michael Froomkin, a University of Miami law professor, told Wired, “This law looks like a political freebie. You get to pander, and nothing bad happens, because there’s no chance this will survive in court.”

So why bother? For DeSantis, who’s itching to become president as soon as 2024, signing the law lets him dangle red meat in front of GOP partisans still unhappy with Donald Trump‘s defenestration from Twitter, Facebook, and YouTube earlier this year, after setting off that little Jan. 6 mob assault on the U.S. Capitol.

The bill not only sucks up to Trump fans, of course. Importantly for DeSantis’ purposes, it also sucks up to the Monarch of Mar-A-Lago himself, who’s still carefully tending to his own potential presidential prerogatives and regardless is expected to deeply influence upcoming elections.

And who knows, even a patently unconstitutional statute might encourage the social media giants put Trump or lesser conservative lights back on the platforms even after they’ve trampled on community standards, terms of service, and basic norms of human behavior.

(It’s a sign of the shifts in political disinformation threats these days that, the Washington Post reported, the Democratic National Committee has moved its counter-disinformation unit into communications, to deal with GOP fibbing, and away from the info-security technologists who battled Russian troll farms.)

Doesn’t matter. The Florida law is about 2024’s presidential race–or maybe 2023, by which time the GOP may have grabbed back control of Congress. The law’s existence represents statute as performance, playing to the peanut gallery in a meaningless way that the less aware will mistake for substantive policy.

That said, the Florida Indulgence does suggest one direction GOP  lawmakers might head should they  retake both houses of Congress in 2022. So, write off this clown show, but put down a placeholder for 2023 shenanigans.

In similar fashion, we need to keep watching what the attorney general for Washington, D.C., is attempting with an antitrust suit filed this week against Amazon.

Not to put too fine a point on it, the suit strikes at the heart of Amazon’s trillion-dollar business model.

The case alleges that Amazon insists on “most-favored-nation” clauses to prevent third-party sellers on its site from charging less for the same product somewhere else.

The clauses sustain Amazon’s dominant position in ecommerce, make it harder for challengers to truly compete, and cost consumers money, or so the suit alleges. It’s a lose-lose for everyone but Amazon.

The case was brought by only a single government entity, one that’s not even a state (yet). But at least it’s a geographically blessed entity well-positioned to prosecute a high-profile case that could have an outsized effect on policy.

Again, the case may not succeed, given its novel take on a century’s worth of antitrust law. But again, at a certain level, that’s not the point.

Its mere filing further encourages the bubbling interest from Congress, the U.S. Dept. of Justice, and the 50 states to rewrite aging antitrust laws for a digital era of network effects and global reach.

All this conversation is potentially meaningful, though again perhaps Amazon’s alleged misdeeds are not the point.

During a long-overdue Hawaii vacation last week, I (safely) attended a small gathering featuring a number of Silicon Valley temporary expats, including the pair behind the essential documentary The Social Dilemma,Tristan Harris and Aza Raskin, who run the Center of Humane Technology.

These days, Harris said, the center’s focus is less on what the Facebooks or Twitters of the world are doing, and more on what the Chinese government is doing. The shift, Harris said, is driven by China’s increasingly harsh crackdowns on social-media, blockchain, digital finance, and other tech companies, and the country’s ruthless global ambitions.

Those crackdowns already have forced the departures of key executives at tech giants such as TikTok parent Bytedance. Also coming: a likely ban on Bitcoin and other independent cryptocurrencies (China has launched a digital form of its yuan), and  cancellation of a massive initial public offering and subsequent restructuring by Alibaba‘s Ant Financial Group.

As Chinese leader Xi Jinping clamps down on every potential challenge to his increasingly autocratic rule, he is also leveraging that country’s tools to undercut competitors in the United States, Europe, and beyond.

And given the centralized powers Xi is wielding so forcefully, Harris said the easily distracted Western democracies are vulnerable. What’s our response if/when China invades Taiwan, which it considers a wayward province rather than an independent country where many of our digital devices are made?

These giant geopolitical questions are perhaps less exciting to ponder than the regulatory sideshows of Florida lickspittles and Seattle monopolists. But we’re going to need to figure out answers to them even as we continue to seek a way through the thickets of everyday digital life amid the tech giants.