Creators On The Rise: How Alan Chikin Chow Got 7 Million People To Laugh At His “Shower Thoughts” 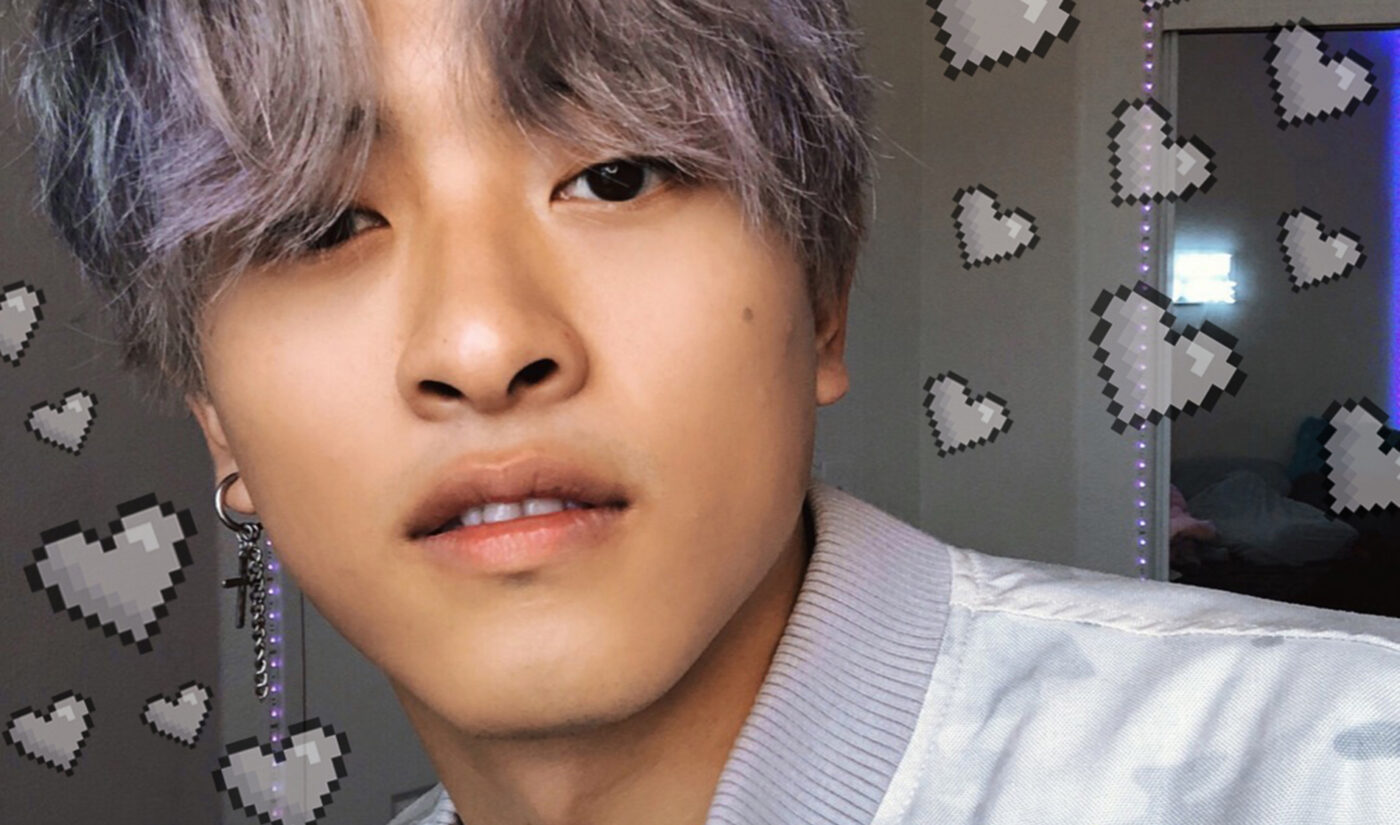 But behind that goal–and his rapidly growing digital presence–is a carefully planned content strategy that has him deploying funny, relatable “shower thought” videos daily on shortform platforms YouTube Shorts and TikTok.

Chow, who’s 24 and based in Los Angeles, has been starring in videos since 2009–but not on the internet. He’s an actor by trade, and over the past decade has appeared in more than 20 TV series and films, including Grey’s Anatomy, Mr. Student Body President, Into the Dark, and Millennial Mafia.

Digital content entered Chow’s life much later. He started sending his shower thoughts into the world in 2019 via TikTok. His YouTube channel was also technically launched in 2019, but only because his brother (who is “super smart and is always looking out for me,” he says) started it for him.

TikTok was the genesis for Chow’s particular brand of quick, punchy humor, which often has a fandom spin. He’s made videos about the daily struggles of your average anime fan, about sci-fi fanfiction, and about what it’d really be like to be part of a K-drama’s sprawling, tangled cast of characters.

Last year, his brother decided to start uploading some of these videos to YouTube. Then, in mid-2020, Chow had a “super smart” moment of his own. When YouTube announced it would launch a TikTok competitor, he kept tabs on Shorts’ development and took YouTube’s advice to start hashtagging his shortform videos with #Shorts, so they would be more easily findable by other users looking for bite-sized content.

The very first video he posted with the hashtag, If Life was a K-drama, caught on, netting more than 2 million views to date. Others he posted afterward weren’t as successful, so Chow went to his management team at Underscore Talent to formulate a strategy for sending more of his Shorts viral.

So, how’s that strategy going for him? 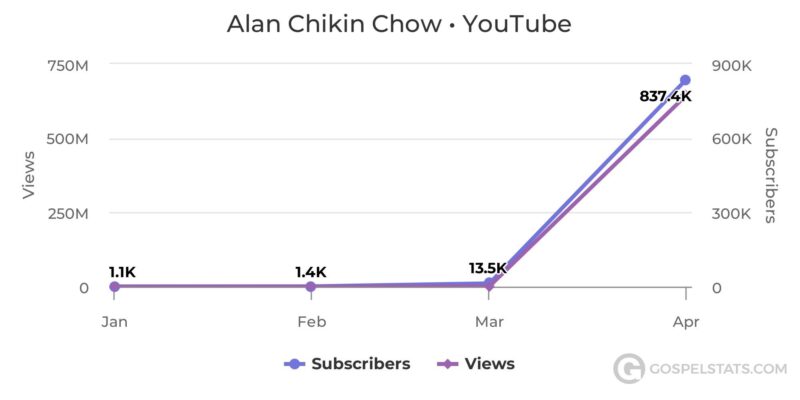 In April, his figures skyrocketed: his channel brought 644 million views and 837,000 new subscribers.

Chow can’t pinpoint one particular video that went viral and kicked off the near-vertical trajectory of audience growth. And neither can we, because in the past two months, more than 20 of his videos have generated more than 20 million views each. His top-viewed video, Acts of Kindness Gone Wrong, has a whopping 127 million, and the runner-up, Sci-Fi Fanfics Be Like, has 93 million.

For Chow, this virality is a green light to change up his career and make content creation a full-time pursuit alongside acting and other creative pursuits like screenwriting.

One thing hasn’t changed, though: He still just wants to make people laugh.

Tubefilter: Tell us a little about you! What’s your name? Where are you from? What do you get up to outside of content creation?

Alan Chikin Chow: Hey, I’m Alan Chikin Chow and I’m a comedy creator with the goal to unite people of all backgrounds and identities through laughter. I’m from Dallas, Texas, and I moved to Los Angeles to study business and screenwriting at USC.

Outside of YouTube/content creation, I’m an actor and writer for film/TV. I’ve starred in a few television shows like ABC’s Grey’s Anatomy and Hulu’s Into the Dark. I’m currently writing a pilot, but the details are hush hush right now…so more on that to come!

Tubefilter: When and why did you start making digital content? What kind of content do you make?

ACC: I started making videos at USC, two years ago. I was in a content creator club at USC, and my friends Mia Finney and Cosette Rinab introduced me to TikTok. I loved Vine, and TikTok reminded me so much of Vine, so I loved it immediately.

Tubefilter: What was your first platform? When did you expand to YouTube?

ACC: My first platform was TikTok. My brother actually made my YouTube channel for me about a year ago because he’s super smart and is always looking out for me.

ACC: When my brother first made my YouTube channel, he uploaded a bunch of my TikToks. Then, when TikTok was banned in India, I read an article about YouTube Shorts coming in the near future. After reading that article, I put #Shorts in the description of all the videos my brother uploaded. This was about one year ago. At that time, only one of them took off (my very first video, If Life was a K-drama).

Then, in February of this year, my managers Vanessa Beals and AJ Nubla at Underscore Talent recommended that I regularly post Shorts. I worked with my team to build a digital strategy for my channels and for my type of comedy videos. After two to three weeks, one random Short popped off. Then, they all did. Seeing my videos take off because of my sense of humor still amazes me. The work I put in from taking my team’s advice full-on and posting content that I actually love to make has been my formula for success. Every other week, I’m creatively trying different video formats and approaches to connect with viewers. It’s been great!

Tubefilter: Your YouTube channel has recently seen a noticeable boost in subscribers and views. Do you know which video triggered this increase?

ACC: Yeah, it’s crazy! Over one billion views in about three months. It wasn’t one video in particular, it was the strategy of regularly posting Shorts. So, I owe it to the strategy that Vanessa and AJ at Underscore recommended me, and the execution of that strategy.

Tubefilter: Did the strategy involve creating new kinds of content, or are your Shorts similar to your channel’s usual fare?

ACC: This was the same style of video I’ve been making, my channel’s usual fare.

ACC: Definitely! I’m now at the point of my digital career to grow from a business side. My goal is to scale my content, hire a team, develop IP that will become more premium content, and work with some of my favorite brands like Netflix, Hulu, and Disney.

Anna Akana is one of my inspirations. I love how she’s been able to make awesome YouTube videos, act in Netflix shows, and write and star in premium shows of her own. Goals!

ACC: I love visualizing a concept in my mind and executing on it. The idea of thinking a funny thought, making that thought become a video, and having people resonate with it around the world is so fun to me.

It’s like having people around the world laugh at your shower thoughts. It’s amazing.

Tubefilter: You also have a sizable TikTok account! Are you mainly focused on making content for YouTube right now, or are you split between YouTube and TikTok? Do you have different goals for each platform?

ACC: My favorite part of creating content on YouTube is the community. It is amazing to see the level of engagement and back-and-forth dialogue with everyone watching these videos.