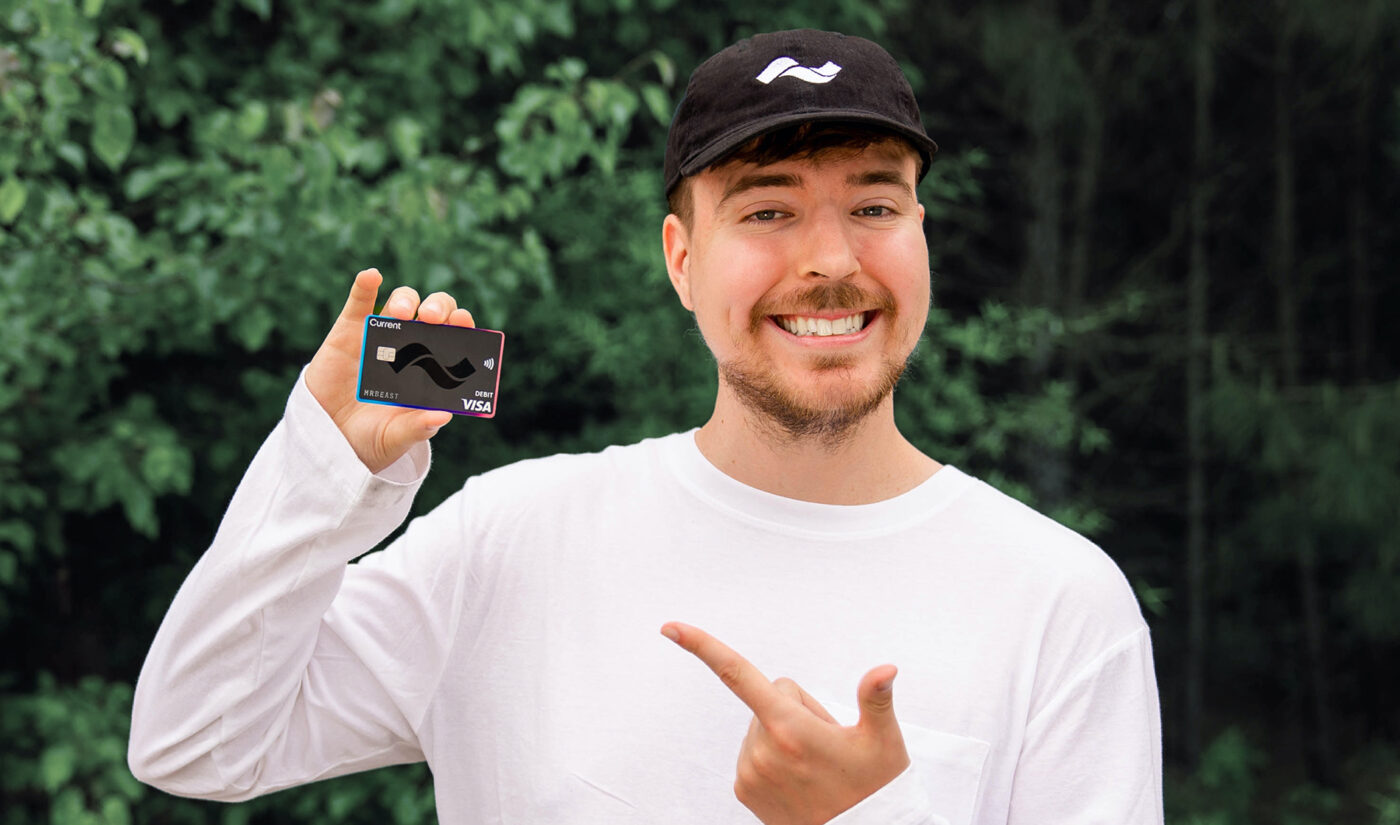 Jimmy Donaldson (aka MrBeast) has signed an exclusive, long-term content creation deal with fintech company Current–and has also become one of its investors.

In an April 24 upload, the famously generous YouTuber (who has 60 million subscribers and nets more than 500 million views per month on his main YouTube channel) announced he will personally send $1 each to the first 100,000 people who sign up for Current using his creator code.

What Donaldson didn’t reveal is that this giveaway is just the beginning of a long-term partnership between MrBeast and Current that will involve limited-edition merch, surprise gifts for users, and more.

“Our mission is to enable members to change their lives by creating better financial outcomes–which sounds a whole lot like what MrBeast does,” Adam Hadi, Current’s VP of marketing, tells Tubefilter. “We’re out here trying to improve people’s financial lives, and we are a platform he can use to do that. It’s pretty incredible.”

Current, founded in 2015 and based in New York City, is a digital bank that targets a millennial and Gen Z audience. It was the first banking app to offer credit card-esque reward points for checking accounts and debit cards, Hadi says. Users earn reward points by doing things like receiving their paychecks and spending their money as they normally would; accumulated points can then be turned in for cash.

Or, occasionally, points can be turned in for items: To mark the launch of the MrBeast x Current partnership, the duo teamed up to create a hoodie that can only be “bought” with 5,000 reward points and not purchased any other way. Hadi says anyone who joins the app with MrBeast’s code and hooks up direct deposit to their account will automatically, immediately earn the 5,000 points needed to get the hoodie.

Who wants to get paid from MrBeast? Go 🔥 pic.twitter.com/mSLPNvnX8T

Current has done sponsorship deals with “hundreds, maybe close to a thousand” digital creators before, Hadi says. But this is its deepest partnership yet–and the first time an influencer has become an investor. (It did not disclose how much MrBeast invested or how much of the company he owns. Current has so far raised a total of $182 million in three funding rounds from investors including QED Investors, Expa, Elizabeth Street Ventures, Avenir, Foundation Capital, and Wellington Management Company. At its most recent funding round in November 2020 led by Tiger Global Management, the company was valued at $750 million.)

“This is like the tip of the iceberg, in many ways,” Hadi tells Tubefilter. “If you look at the influencer marketing space and how it’s evolved over time…I think more and more you’re seeing ownership be a part of the biggest influencer partnerships.”

The business views itself as a “less of a sponsor and more of a partner, where MrBeast can use us to achieve his goals,” Hadi says. He adds that with the partnership, “we’re able to dedicate resources–from products, from engineering, from business–with kind of a long-term horizon to do cool stuff.”

It’s worth noting that Night Media, the Dallas-based talent management company which represents MrBeast, recently launched a $20 million venture fund to allow creators like him to invest in businesses that interest them.