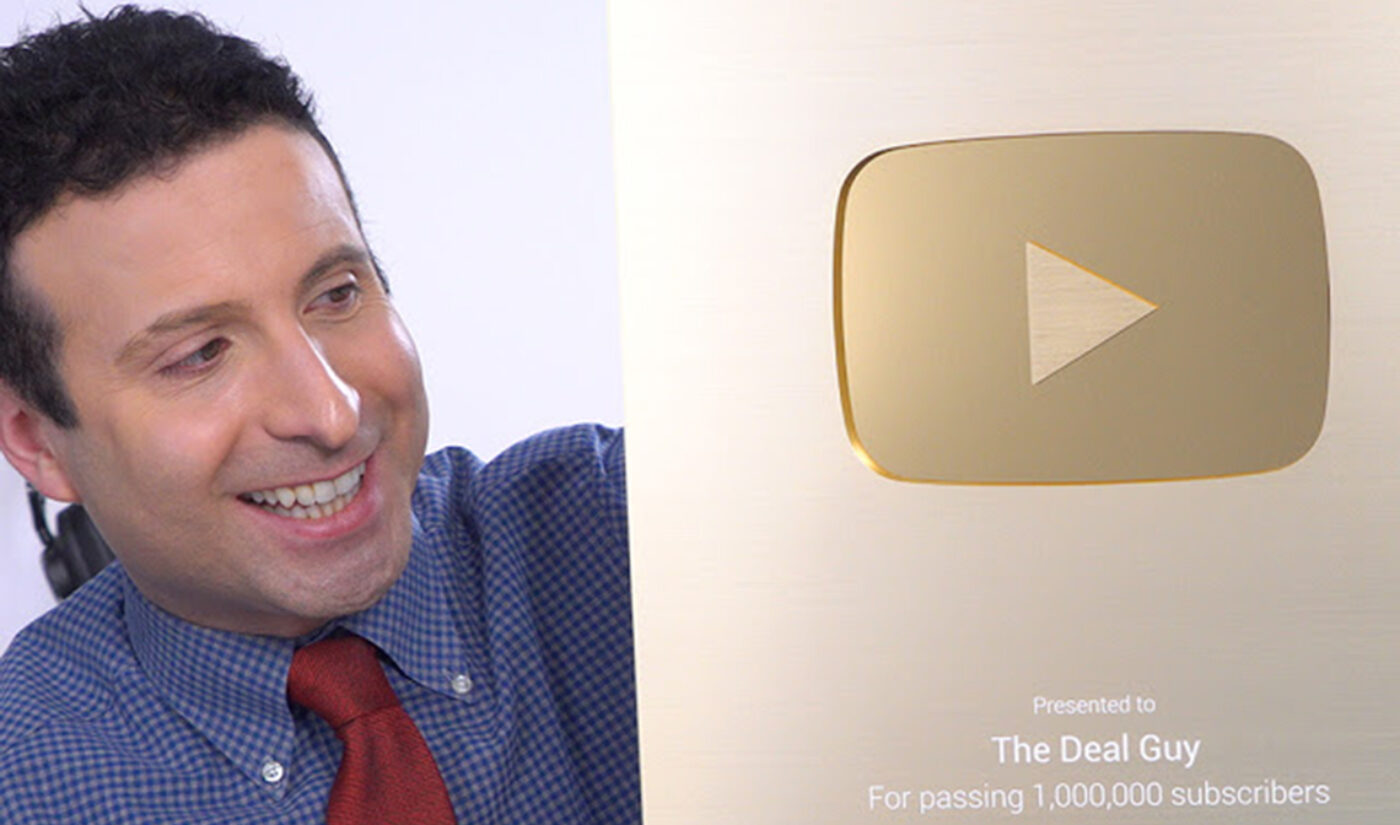 We all have beliefs that guide us. Do unto others, apple a day, only park on the left side of the street because the right side might be cursed…

The Deal Guy has a central tenet, too. And it, like much of his life, revolves around snagging bargains: “You can live your entire life,” he says, “paying less than half price on almost any purchase.”

A former journalist and self-described failed White House correspondent, The Deal Guy got his start on YouTube in 2014. There, he parlayed his TV presenter skills into making videos that guide viewers through everything from “small financial decisions” to “major purchases,” he says.

For much of his content, The Deal Guy searches up a handful of current bargains available at a specific store and bundles them together–10 Things You SHOULD Be Buying At Costco In March 2021. But he also tackles broader subjects like financial scams to avoid, deals that aren’t as great as they seem, and new Amazon Prime benefits.

That last one is particularly relevant to The Deal Guy, because outside of YouTube, he’s also an Amazon Live streamer. We’ll let him tell you about that half of his contnet career and much more in our chat below.

The Deal Guy: I sat in front of the computer watching my YouTube subscriber count roll over to a million like I was watching a New Year’s countdown in Times Square. It felt surreal, and I’m indebted to my viewers and subscribers who helped me reach this milestone. I’m humbled by the growth and deeply motivated to continue that momentum!

Tubefilter: Tell us a little about you. Where are you from? How did you get started on YouTube, and why did you pick YouTube to be your main platform?

TDG: I’m originally from Toronto, and after moving to the States for grad school and later failing miserably as a White House correspondent, I knew I needed to pursue a passion rather than work as a journalist. I was basically using coupons before I could walk, so I decided to develop a YouTube channel centered around epic deals and saving money. I quickly learned YouTube could provide me with a bigger audience than I ever had on television and a significantly more authentic relationship with a viewer.

Tubefilter: What made you want to create a channel entirely focused on deal-finding and savings?

TDG: I’ve made it my lifelong mission to live a five-star life on a one-star budget. I live and breathe bargains, and my Deal Guy YouTube channel is built to help fellow consumers go beyond a store’s fine print. You can live your entire life paying less than half price on almost any purchase. I help people find their inner frugality. As a parent, I can relate to wanting to give your child the world but not necessarily having the budget to do so. My YouTube channel is an autobiographical bargain-hunting exposé.

YouTube is my platform of choice to help people budget before they make a purchase, while Amazon Live is my opportunity to connect with people while they’re shopping. YouTube is my chance to bond with a community, while Amazon is my opportunity to connect with a consumer. I stream almost every day on Amazon Live while I upload almost every other day on YouTube.

Tubefilter: How do you make your YouTube channel stand out from similar fare?

TDG: My YouTube channel is built entirely around my subscribers. I produce content on demand. I use the YouTube “Community” tab to poll viewers on anything from the subject matter I investigate to what types of thumbnails they’d like to see. My YouTube videos are timely–helping guide small financial decisions or major purchases each week. During the holiday quarter, when people are especially cash-strapped, I highlight once-in-a-lifetime deals while weeding out other so-called “sales.” I hardly sleep for three months between Prime Day, Black Friday, and Cyber Monday. It’s epic!

Tubefilter: Do you have any strategies for growing your audience? Have you noticed any particular kind of content getting more traction than others? Do you adjust what you create depending on how your viewers react?

TDG: My main strategy toward audience growth is don’t try to anticipate your audience’s needs. A viewer or subscriber’s wants are changing on a daily basis. I’m reactive rather than proactive when it comes to producing content. I let my subscribers explain their purchasing problems or dream deal scenarios, and then I work with every ounce of my being to make that a reality in my next video. Preproducing a lot of content in advance is not what YouTube is about.

At the moment, strategies for warehouse club shopping and knowing the top picks from stores like Costco, Sam’s Club, and BJ’s are of prime interest for my viewers. There is also a growing community of people who want access to the insider finds at The Dollar Tree or Dollar General. Showcasing a product from Target that costs 55% less at a dollar store is a huge focus of what I do right now.

Tubefilter: How do you decide which products to feature? Have you gotten any sponsorships to feature certain brands/items?

TDG: I’ve been obsessed with tech my whole life, so the brands I feature are typically tied to products I already own. I do get some sponsorship opportunities every month, and I use these experiences to help discover alternatives to name-brand electronics. If you could find a pair of high-quality headphones that perform like Bose for 1/10 the price, that sponsorship becomes a huge benefit to the viewer rather than just an opportunity for me to pocket extra cash. I have also been lucky to work with brands during their big sale events, like Walmart, Amazon, T-Mobile, HP, and more.

TDG: My favorite part of making content on YouTube is that instant connection with a viewer and a chance to swiftly dispense deal-oriented advice on any topic. When I shifted from television to YouTube, my TV colleagues at the time believed YouTube was a “lower-quality free-for-all,” or a place where anyone could upload without the same high standards in place. They were wrong. Top YouTube content is more captivating than network television, and there is a higher level of accountability from the viewer. YouTube is raw and it’s the center of my universe (other than my wife and daughter).

Amazon Live is a prime opportunity (no pun intended) to connect with a shopper in real time on one of the world’s largest shopping platforms. For all of those times where you find yourself in a store unable to locate a store associate to answer your question, I’m your guy on Amazon Live. I help serve shopper needs on Amazon with some highly opinionated interjection throughout the process.

Amazon Live is real-time shopping platform with a growing community of highly supportive fellow creators. YouTube is my life. It’s where I can exist and assist long after my Amazon stream has wrapped up.

TDG: The next step for my channel is trying to trying to vary up my shooting locations and scenery whoever possible. I would love the ability to shop live and feature deals while at a retail location, which has been difficult during the pandemic but I’m optimistic I will be able to make this as reality soon as things calm down. I’m also contemplating a second YouTube channel focused on membership clubs and hotel/airline tips and tricks. In addition to this, I’m also currently working on building out my website http://thedealguy.com in order to provide my viewers more spur-of-the-moment and timely deals.