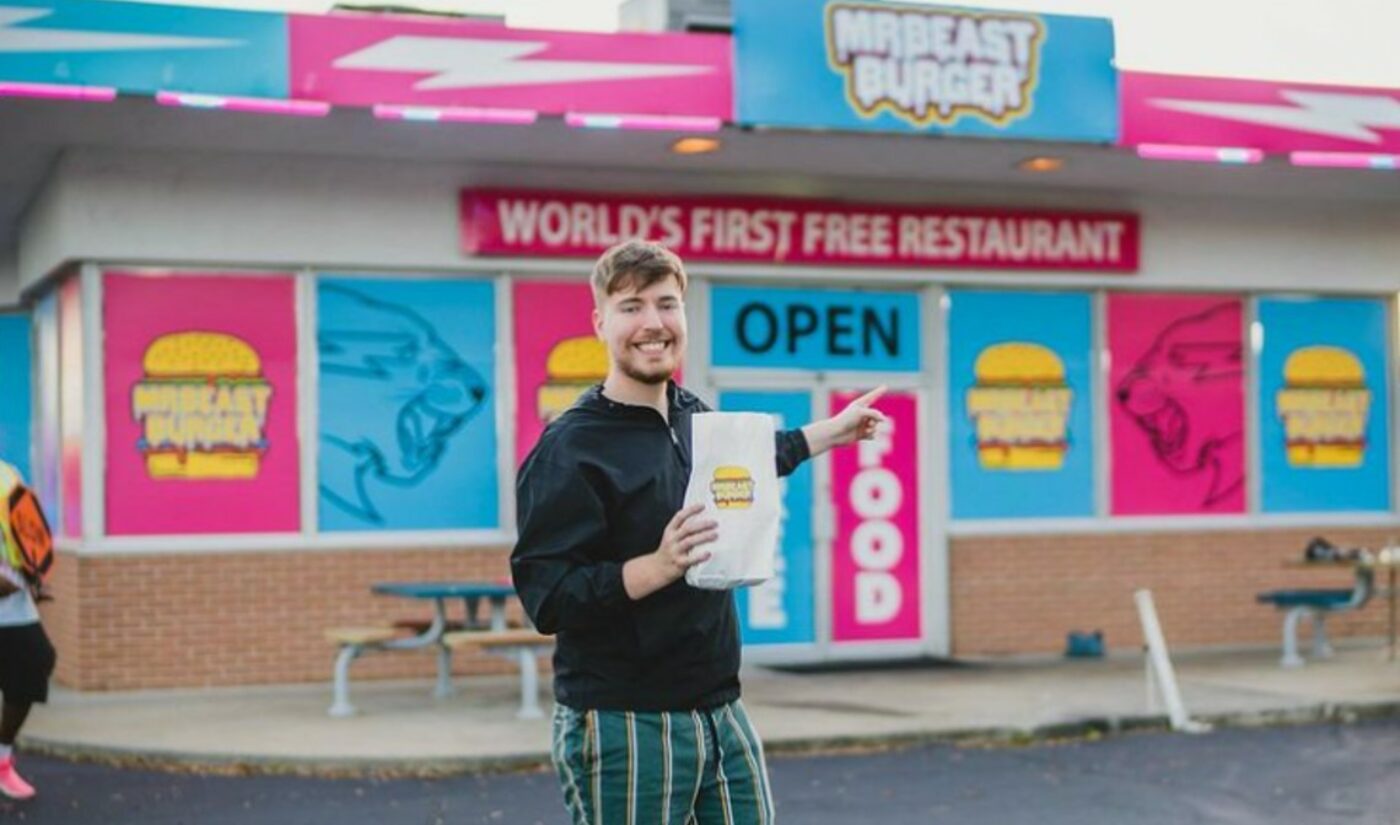 MrBeast’s latest eye-catching stunt has segued into a promising new business venture: the delivery-only, fast-food brand MrBeast Burger, which is currently operating 300 locations across the country.

That concept was born from MrBeast’s latest YouTube video, I Opened A Restaurant That Pays You To Eat At It (below). At a pop-up location in Wilson, North Carolina, MrBeast — whose real name his Jimmy Donaldson — opened a pop-up fast-food shop staffed by his friends and video collaborators. While that may sound like a dubious prospect from a health perspective — particularly in a pandemic year — it wasn’t a traditional restaurant, per se. In addition to burgers, the guys handed out stacks of cash and other prizes through a drive-thru window, including Apple products and — at one point — a brand new car.

MrBeast Burger spawned hordes of local interest, including a line of cars 20 miles long, with police ultimately asking the guys to close up shop given the disruption to traffic.

At the end of the video, however — which was filmed in November but is currently sitting at No. 1 on the YouTube ‘Trending‘ tab with 19 million views — Donaldson announced that MrBeast Burger wouldn’t remain a one-off. Going forward, fans would be able to order their own meals via a dedicated iOS and Android apps from 300 MrBeast Burger locations around the country. Donaldson said he’s working to roll out the venture internationally, as well as to double and triple the number of locations stateside. (For comparison’s sake, in terms of scale, there are roughly 13,500 McDonald’s locations in the U.S.)

Dnaldson created MrBeast Burger alongside Virtual Dining Concepts — a startup that furnishes turnkey delivery-only restaurant concepts for celebrities like Tyga, Mario Lopez, and DJ Pauly D, which are available via Grubhub, DoorDash, Uber Eats, and Postmates. MrBeast Burger and the above food entrepreneurs operate their brands out of existing restaurant kitchens — enabling these restaurateurs to add a new revenue stream to their existing shops.

Customers can order food from the dedicated MrBeast Burger app or via the above food apps. The menu features six burger and chicken sandwich options — named for the preferred orders of Donaldson and his friends — as well as crinkle cut french fries and a chocolate chip cookie for dessert. If you’re hungry, you can check out the full list of 300 locations right here.

In addition to topping the YouTube trending charts with his latest video, the MrBeast Burger app soared to the top of the iTunes App Store charts, initially reaching No. 1 — but currently standing tall at No. 2 — on the ‘free app’ list. This is something of a mind-blowing feat, notes influencer marketing guru Ian Borthwick, given that MrBeast Burger incurred zero marketing spend and Donaldson has no experience in the food industry.

That said, Donaldson isn’t the first creator to venture into the food business. You can check out how other creators have launched their own food businesses — and tapped into the growing trend of ghost kitchens, like the ones launched by VDC — in a recent episode of our investigative series Creator News: