YouTube Millionaires: Derkslurp On TikTok, Time Management, And The World’s Most Essential Drink 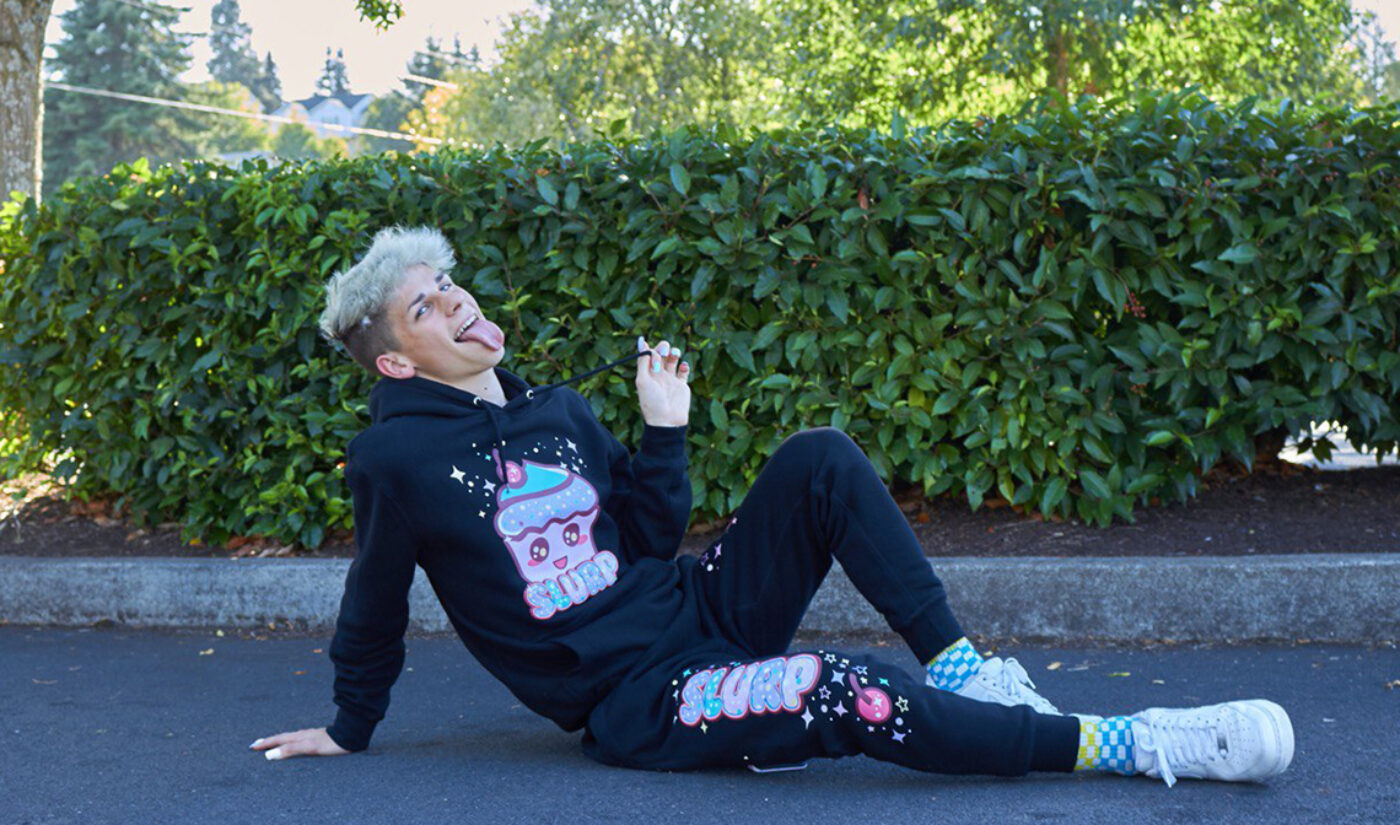 Life is better with a Slurpee in hand.

A lot has changed in Derek Boyd‘s life over the past couple of years, but not Slurpees. Every day, he wakes up, works out, and then heads to 7-Eleven for a cup of the good stuff. He loves them so much, they’re half his internet name: Derkslurp.

Usually when we profile content creators who are active on both YouTube and TikTok, they started on the former and expanded to latter. But oh how the turntables: 19-year-old Boyd started on TikTok back when it was musical.ly, and recently parlayed his success there into a longer-form foray on YouTube.

Over on TikTok, Boyd has gathered more than 14 million followers with comedic slice-of-life videos about bread being bae, how Instagram is kinda awkward sometimes, spiders down under, leg pits and what might live there, and cats. His YouTube videos have the same feel, but mix in things like viewer challenges and grandmas and the timeless classic Among Us. For Boyd, YouTube is where he always imagined having a career as a creator–but TikTok was also “WAY easier,” he says. YouTube videos give him much more run time to fiddle, which means more run time to edit “too much” (his judgment, not ours!) and second-guess himself.

By the numbers, though, you can’t tell he’s on a learning curve. In just over a year, he’s put out more than 50 YouTube uploads, and his channel now has more than one million subscribers.

Check out our chat with this newly crowned Millionaire below.

Tubefilter: How does it feel to hit one million subscribers?

Derkslurp: I mean…it’s cool I guess. Of course it is crazy to see that number, and I am very excited about it! I don’t want to come off too modest at all. I see it as more motivation to get to the next milestone. There is always room to grow!

Tubefilter: What do you have to say to your fans?

Derkslurp: Thank you for thinking me being weird and random…and practically doing who knows what, is worthy of you clicking that button.

Derkslurp: Well, I’m just a normal person from a small town in Oregon. I look around and see trees and fields, so…not much here. Before starting YouTube, I just posted TikTok videos. It was just for fun…never knew I could turn it into a job, honestly. I always felt people found it odd, but I just was enjoying myself, so it never mattered.

Tubefilter: We know you just hit one million subs on YouTube, but it still feels like we’re celebrating a bit late, because, as you mentioned, you’re also a TikToker, and you have 14 million followers over there. Has TikTok been a big driver of traffic/subs for your YouTube presence?

Derkslurp: It has for sure helped a lot! Very helpful when you already have viewers who can help with analytics, giving me more of a chance of being recommended to new people on YouTube. It has also very much motivated me to work at YouTube more. YouTube has always been my favorite platform. I watch content on there more than anywhere else, so I always thought of doing that more than anything. It is more difficult for me, though. I am my worst critic with it. My ultimate goal is to transition my audience to my longer-form content and continue working on branded material all over!

Tubefilter: What differences have you noticed when it comes to growing a YouTube channel versus a TikTok account?

Derkslurp: TikTok was WAY easier! I’ve also done TikTok for much longer (ever since it was musical.ly), so it’s more comfortable for me (I’m a little more confident in what I make there). YouTube takes a little more time for me, so I end up judging what I make more and second-guessing it.

Tubefilter: We have to know: Where did “Derkslurp” come from?

Derkslurp: This is a little complicated to explain, but I’ll try my best. So Derk comes from Derek, which is my real name. I just never imagined having my real name connected to my online stuff. Not sure why, honestly, just felt weird to me. Slurp comes from many things. I have an OBSESSION with Slurpees from 7-Eleven. I literally leave the house every day to just get one. They just make everything better for me. I also used to have this thing with one of my friends where we would look at each other at random times of the day at school, and we’d just make a slurping noise with our mouth while awkwardly staring at each other. It’s very weird to say that and probably makes zero sense, but it was a thing, don’t judge. Lastly, it’s just a fun random word I like.

Tubefilter: You have a line of merch emblazoned with your very cute logo. When and how did you hit the point where you knew fans would be interested in buying merch?

Derkslurp: I think I started it at the perfect time. People kept asking for it, so I slowly started the process. I never wanted to do it too early, though. I am not really confident in myself and didn’t think that anyone would want anything from me, so it is very cool to me to see it!

Tubefilter: How did the design process go?

Derkslurp: It went well! I’m not much of a person who can really draw, but I have many ideas in my head and just tried my best to explain that to the good artists.

Derkslurp: It actually is! I was at a pretty good place with it by the time I graduated high school and decided to just put all my energy into it since it’s what I love. That was, of course, after I almost went to college, and the day before, I was like, “Uh…no, I don’t want to.”

Derkslurp: Well…I don’t. I’m very bad at it, but I’m working on it! Ideally, I want to do one or two TikTok videos a day, and at least one YouTube video a week.

YouTube videos take…too long! I don’t have insomnia, but with the amount of editing I do, I might as well. I get distracted so easily during the day (thank you to my parents), so at night I edit the most. Filming the videos isn’t really my issue…I just edit too much!

TikToks take either an hour or two. Which probably sounds insane! You may wonder, Why would anyone spend that much time making a dumb 30-second video? My answer to that is…I’ve got nothing better to do so, why not?!

Tubefilter: What else do you get up to outside of content creation? Walk us through an average day.

Derkslurp: My life is very uneventful, so hold on to your seats! I usually get up anywhere from 7 a.m. to 9 a.m. (if I am up all night editing) and I’ll typically edit for a little and then work out. Something that may be surprising to you (it is to me), but it makes me feel better about myself! Then I’ll film a TikTok video and edit it, then go get my daily Slurpee! I’ll then get home and maybe have something to eat and I’ll edit for YouTube! It’s like that practically every day. When I’m not editing, I’m either watching The Office or just listening to music.

Derkslurp: My favorite thing is when I get messages or comments from people saying that what I make makes them happy, or they just enjoy it. I know very well that sometimes the smallest thing that makes you smile on a bad day, can just make things better, even if it’s just for five seconds. Never would I imagine that me…being some random person with an editing software, could be something someone looks forward to. I am very much glad I can be, though.

Derkslurp: Well, I’d love to get the chance to do more vlogging! Hopefully meet a group of people I could make videos with (maybe in LA?). That’s my dream. Gets lonely doing it all on my own with no one else to enjoy it with. Makes it harder.

I don’t want to promise anything,but I want to start my own clothing line! I LOVE CLOTHES!!! So I want to be able to make things that could be considered something other than merch. Something people who don’t even know who I am would wear. I also want to get back into music. I used to make beats and stuff before I started videos. Of course, I was a child, so none of it was any good, but I want to get into it again. It could be me just producing the songs, or maybe I’d add my voice to it, too! Who knows?! Would love to do some music videos and stuff like that. I’d like to get more into the LA scene and get more opportunities that way. Not much for me in my hometown. Think I’m ready to get out and experience things! I’m down for anything, really, so hit me up!