Clash, A New TikTok Competitor From Viner Brendon McNerney, Is Made With Creator Monetization In Mind (Exclusive) 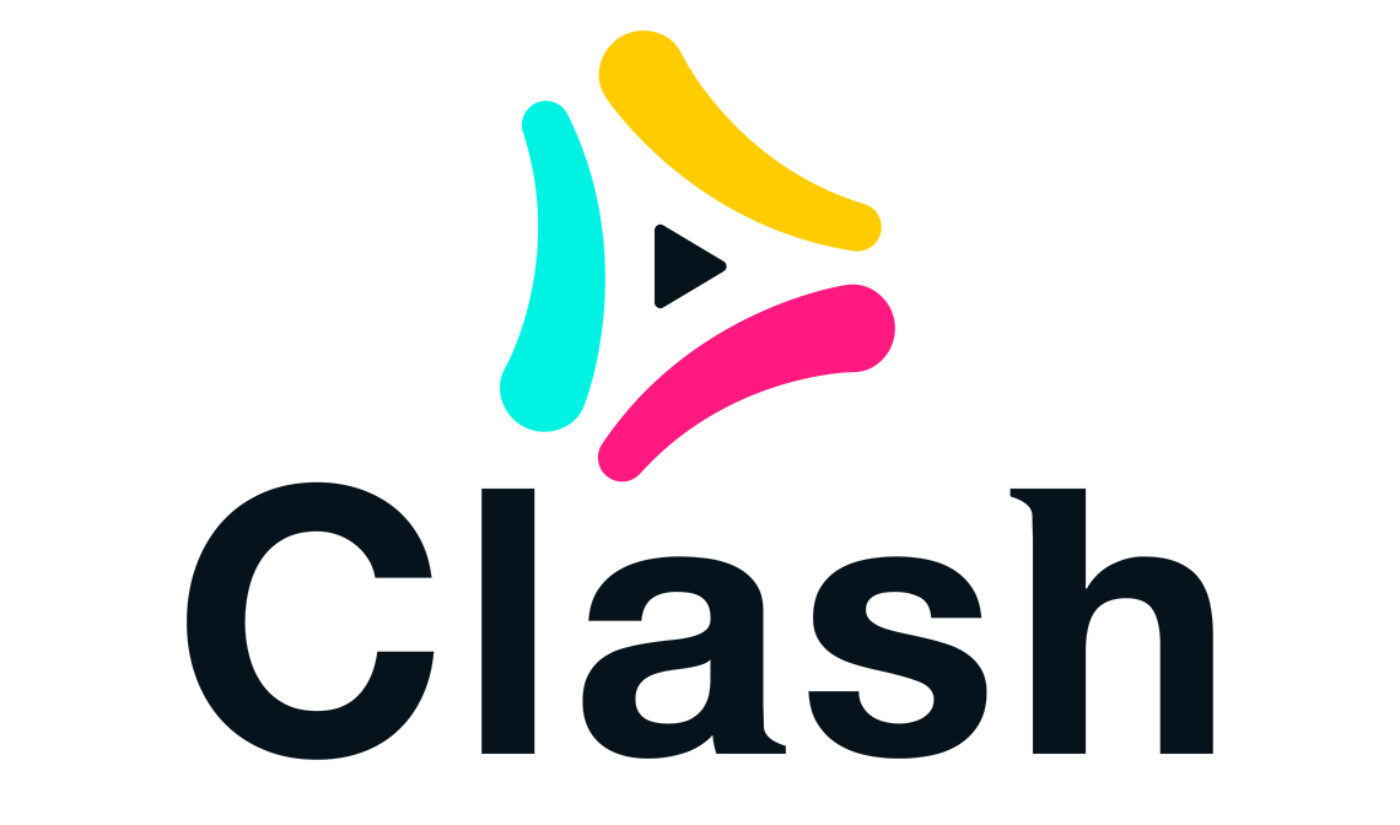 Over the weekend, TikTok’s 100 million U.S.-based users came face-to-face with a potential future where the app is no longer accessible stateside. After the Trump administration said a nationwide ban could pass as soon as Aug. 1, hashtags like #riptiktok and #goodbyetiktok trended on social media, and FYP.RIP, a service that lets TikTok users download all their content at once, tells Tubefilter it received more than 100,000 new requests from people frantically trying to preserve their videos.

Though the White House has now seemingly backed down from a ban to allow for negotiations between ByteDance, TikTok’s current owner, and Microsoft, its maybe-future-owner, users’ sense of security has clearly been shaken–and that’s prompting some to look for a new digital home.

One app that saw a spike in traffic is Clash, an in-beta video app developed by former Vine creator Brendon McNerney and digital marketing expert/content strategist P.J. Leimgruber. Functionally, it’s a sort of middle ground between TikTok and Vine. Like TikTok, it allows users to create and share longer-than-Vine (21 seconds max, to be exact) looping videos in an environment where popular content is surfaced on a Discover-like page called Now Serving, and users swipe up to scroll through an endless feed of new videos. But it also takes a step back to Vine days by not offering a library of songs and sounds; audio is supplied solely by creators. 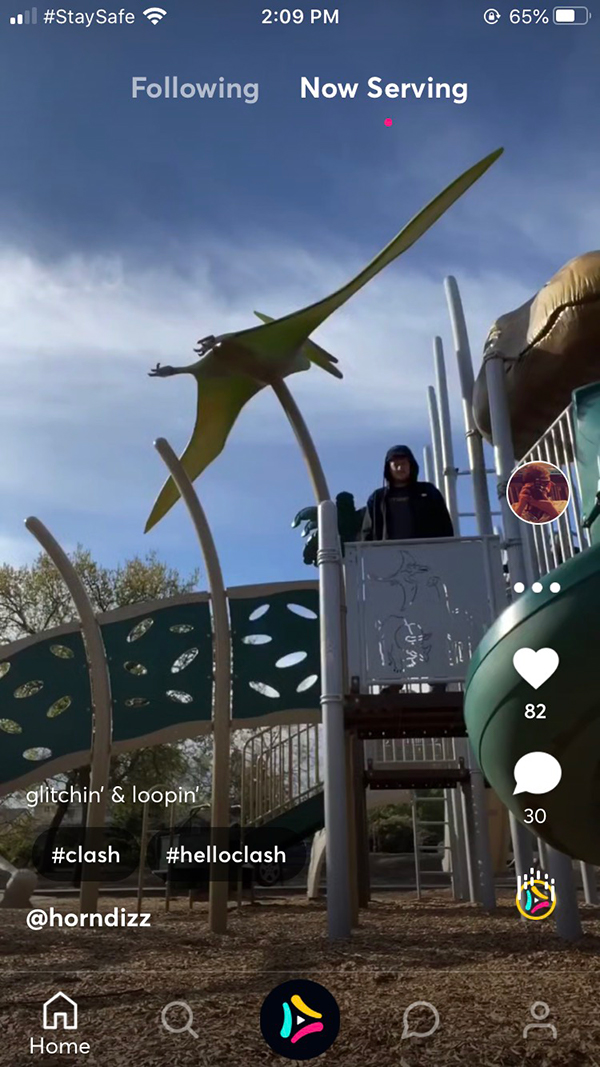 A screenshot of Clash, which looks a lot like TikTok.

Clash soft-launched into app stores last week. On Friday morning, it had around 26,000 users. By Saturday morning, it had 126,000. Now, it has over 200,000, CEO McNerney tells Tubefilter. It spent the weekend near the top of Apple’s free app chart, beaten only by YouTube, Instagram, Snapchat, and Triller, another shortform video app that just poached some of TikTok’s biggest creators and is currently suing ByteDance for patent infringement.

McNerney, who worked as a digital producer at digital network Collab, and Leimgruber, who’s cofounder of influencer marketing company NeoReach, both consulted for TikTok on launch strategies in 2018, when ByteDance merged the app’s user base with Musical.ly‘s. When they began making Clash a year later, they didn’t set out to create a competitor that would steal away TikTok’s users. Instead, they intended to create a new environment for early-days Vine users who perhaps aren’t keen to adopt redux Byte and “weren’t happy with the direction TikTok had taken,” McNerney says.

Building with monetization in mind

They also had a pain point to solve for ex-Vine creators and TikTokers: monetization. Vine infamously struggled to monetize content for its own profit and creators’, and Clash’s cofounders have seen similar issues on TikTok.

“I’ve had too many friends that had to leave L.A. because they wouldn’t be able to pay rent,” McNerney says. “And so many friends who wanted to chase something and couldn’t because it’s really, really hard to break into this business. I saw TikTok take off and hoped that it was going to bring some sort of tools or some sort of atmosphere that would help creators more. Definitely seen a lot of creators grow, but never saw something that was truly for creators that actually helps them make a living, and helps them do what they want and chase those dreams.”

Unlike platforms such as YouTube and Facebook, TikTok doesn’t share ad revenues with creators. It has established two funds that are doling out $50 million and $200 million, respectively, to creators making content on its platform, and it also offers virtual items like Coins, Gifts, and Diamonds that users can give creators during live streams. The vast majority of creators who earn income on TikTok, though, do so through outside brand partnerships and sponsored content.

Clash’s core goal is eradicating this earning problem, McNerney and Leimgruber say. Income features that’ll roll out in the coming weeks include Drops, an onsite currency and tipping feature akin to YouTube’s Super Chats and Twitch’s Cheer that can be used on any video at any time, not just during live streams, and an equity program that will give top creators actual ownership in Clash. Exact details for Drops, including how much the onsite currency will cost users, what creators will receive, and what cut Clash will take, is still being worked out.

The equity initiative is a “critical, defining factor of Clash,” Leimgruber says. Right now, the program has doled out stock options to 20 creators, the names of whom it plans to announce next week. Clash will sign more creators to the program in waves, and intends to end up with between 200 and 300 creator owners. These owners won’t receive yearly payouts of revenue, but instead will be able to hold on to their stock and sell it if Clash rises to a multimillion or even billion-dollar business, he explains.

The 20 creators who currently own stock are all above 18, but in the future, Clash “would really like to be open to creators under 18, with parental consent,” Leimgruber says.

Clash is also paying a few hundred early adopters to simply (and non-exclusively) use the platform and report back on their experiences as creators, including pointing out any bugs or quality-of-life improvements they want to see.

“Right now, the focus is, ‘How are creators going to make money?’” McNerney says. “Because if creators are making money, the platform is doing well. Everybody’s making money and we’re all happy and we’re creating and just being ourselves on Clash.”

They add that Clash isn’t eschewing brand partnerships. In fact, it plans to put together an in-house team that will work with creators to secure sponsorships, plus teams for digital rights management and merch production. Another incoming feature is Huddles, which are customized, invite-only communities curated by users. Using Huddles, creators can do things like reward their most frequent Drops contributors by inviting them to a small Huddle for more private discussions or Q&As.

For now, though, Clash is largely a bare-bones “blank slate,” they say. It doesn’t have any filters, effects, or post-production editing tools. Users hold down a simple button to film, release to pause filming, and when their 21 seconds is up, it’s time to post. Clash says it plans to update features by “letting our creator community dictate what camera add-ons, filters, and features to prioritize.”

However, there is one currently available post-production function that’s worth pointing out: auto-saving. The reason TikTok users are flocking to FYP.RIP is because TikTok does not automatically save a copy of videos made with it to users’ phones, so there is no external copy of their content. Clash automatically adds any video a user makes to their phone’s photo library before they post it.

Clash is still seeing around 10,000 new installs per hour, McNerney and Leimgruber say. These early beta users “have the opportunity to shape the vibe of the whole platform,” McNerney explains. “We’re not only open to it, we’re encouraging that sort of feedback. The biggest benefit to the creator is that they have a real chance to make an impact and take their experience and what they’ve learned and actually put it to use and help us manifest that.”

He adds, “This is an open invitation to come onto Clash for yourself, create, and just be positive with hundreds of thousands of other people out there just like you.”