Insights: What Will It Take For Livestreamed Shopping To Take Off In U.S.? 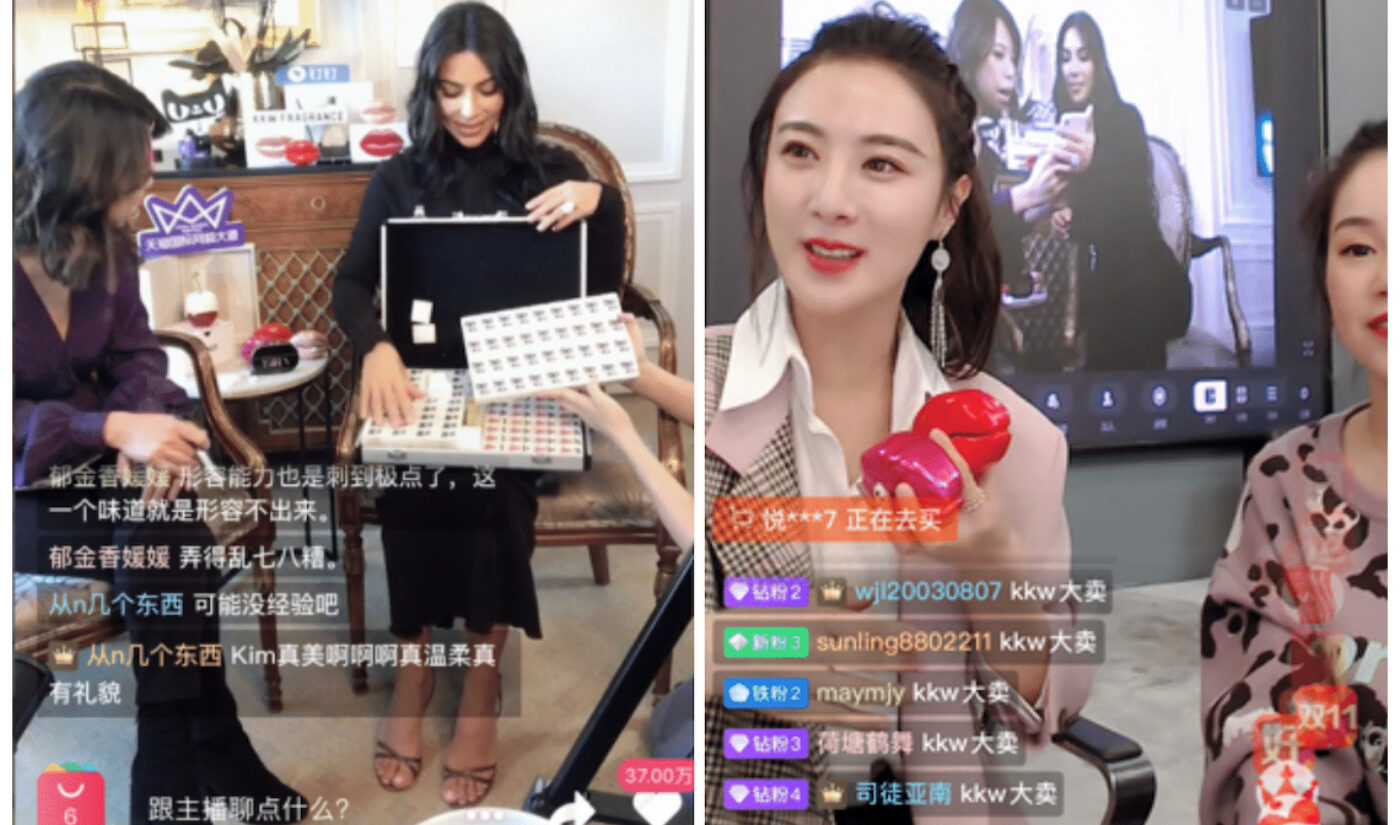 Imagine the collision of online influencer, Twitch, and QVC. Or even better, swap in Twitch owner Amazon for QVC, since it seems to sell everything we’re buying these days. This looks like a big winner, yet somehow it isn’t one yet, at least in the United States.

Turns out, in China, it’s huge, according to a recent two-part report from Chris Erwin and RockWater Industries on the “Chinese trend of livestream shopping.” At some point, someone will put together the magic formula to make livestreamed shopping as big in the United States, creating a gold mine for the group of influencers whose talents and ability to inspire trust will unlock big audiences and opportunities.

In China, livestreamed shopping is projected to generate a staggering $129 billion in revenue this year. That makes it 129 times bigger than esports, and three times bigger than the 2019 global film industry (and, at the rate things are going, probably 50 times 2020’s film business). It’s even double what Apple makes from all its different “Services” like Apple Music, TV+, and iCloud, a unit that would be a Fortune 60 company if it weren’t part of Apple. So, really big.

Per the pair’s report, “48% of U.S. brand-marketer respondents said they don’t use international influencer-marketing trends to inform their domestic priorities. However, the rise of Chinese livestreaming commerce should not be ignored. There are many relevant learnings for US brands, creators, and platforms.”

More than 100,000 brands, including American staples such as Procter & Gamble, Levi’s, and Ralph Lauren are on Taobao.

And the service has built its own influencers, who webcast for hours at a time, like Twitch stars, selling limited-availability products and deals. A deal is queued up, the host pitches it, and onscreen graphics count down how many units are still available. When the product is sold out, the streamer moves on to another one.

That limited availability creates a crucial FOMO experience that drives both sales and extended viewing. It’s like Amazon Gold Box daily deals with an engaging salesperson showing you why you should buy.

China’s biggest livestreamed shopping influencer is Viya, who had a minute of U.S. fame when she invited Kim Kardashian, that avatar of opportunistic American capitalism, on air last winter. Kardashian’s visit was a hit, selling out 15,000 bottles of perfume in 15 minutes.

Even pricey durable goods–which people typically take weeks to decide to buy, and for which they typically do tryouts and research–are being sold online effectively. Geng Shuai, another big personality, sold more than 1,600 cars in 2.5 hours.

So why isn’t livestreaming already a big thing in the U.S. yet?

Putting the pieces in place

Plenty of pieces seem to be in place. Many influencers have their own merchandise lines, which frequently sell out in minutes or hours. Then the influencer goes back to doing the things that made them famous in the first place.

Esports, probably the closest we’ve gotten so far to what’s happening in China, already routinely sells merchandise in its live streams, generating what’s expected to be more than half of the sector’s revenue this year.

Fortnite and other games are rapidly adding ecommerce and entertainment functions into their business models. Just this week, Roblox announced its Party Place, a private gathering spots on the game service for birthdays and other get-togethers.

And the latest report from StreamElements and Arsenal.gg on the “State of the Stream” said Twitch viewership shot up 56% in the second quarter of 2020, compared to Q1, as people watched more than 5 billion hours of livestreamed programming there.

Some Twitch personalities are effectively integrating commerce into their operations, but it’s clearly not their core business–at least not yet. 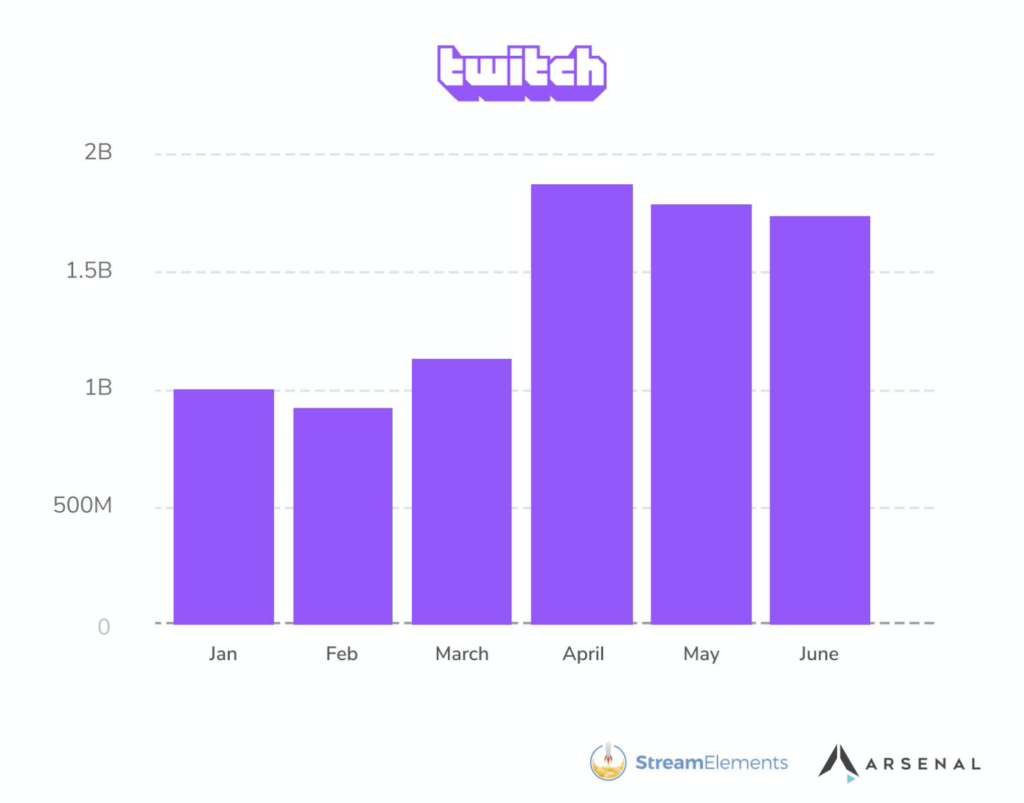 Hours watched on Twitch skyrocketed in the second quarter as the pandemic lockdown took effect.

As the RockWater report acknowledges, companies have been selling stuff live for decades, going back to QVC’s cable-TV launch in 1986. Influencer marketing, meanwhile, generated $8 billion in revenue last year.

In May, Facebook announced Facebook Shops, an online storefront for small businesses on Instagram and the mothership. Online-savvy brands such as Casper and Dollar Shave Club have their own programming channels, smearing the lines between what’s commerce and content.

Amazon launched its Amazon Live platform last year, and it already has dozens of streamers hocking wares of all kinds. Like so much else on Amazon’s sprawling site, however, finding the service can be a challenge, and a spot check of a few channels showed very low viewership. Part of that is because people don’t generally come to Amazon to watch live streams of things to buy. They come to buy things they already have decided they want. It’s a very different sensibility.

And that speaks to one of the challenges replicating China’s success.

The U.S. market remains considerably more fragmented than China’s vertically integrated “super apps.” Alibaba, for instance, has units for content distribution, ecommerce, e-payments, and shipping/returns. It even has a creator academy to groom new talent.

By contrast, buying something shown in a YouTube video likely involves clicking to an outside seller that likely uses an outside fulfillment provider, and an outside payment provider. Every click away from YouTube becomes another reason not to buy.

Unsurprisingly, there’s a race right now between content and commerce companies to become the destination for future U.S. livestreamed shopping.

The key to get people to tune in will be “trust and influence,” which means the companies need to find, develop and promote “lighthouse” on-air personalities who can attract audiences looking to buy, and be entertained at the same time, RockWater said.

For a company like Fortnite developer Epic Games, that might mean that may mean getting Kylie Jenner to sell a limited run of gamer apparel. For Facebook/Instagram or YouTube, it might mean partnering with some of their top influencers to build better integrated shopping formats.

There’s even an opportunity for media companies now shifting their focus to online video. Imagine the potential for Disney+ to wrap livestreamed programs featuring its merchandise around the service’s scripted programming. Such live shopping might even be more entertaining than the many navel-gazing behind-the-scenes shows Disney+ has debuted since launch.

Integrated live shopping platforms have launched too, including NTWRK, Verishop, and Popshop Live. They’ve at least solved what I call the DNA Problem, because they’re all built from the ground up to seamlessly combine content and commerce. But they need viewers to succeed.

RockWater suggests those sites partner more with A-list talent or platforms to drive audience scale, but “the bar is high and the margin for error is low.”

Amazon still hasn’t really solved its own DNA problem (people don’t go there to shop on livestreamed video). But Bezos‘ beast can still own this space, especially if it adds live programming to Prime Video. Mixing in live shopping featuring, say, outfits inspired by The Marvelous Mrs. Maisel seems like a sure win.

The big winners here could be a new crop of influencers who instill trust and can draw audiences looking to buy. The influencers are much better positioned than any one brand to win big.

“Livestream consumers follow the influencer,” RockWater says. “And when the influencer’s attention moves away from a brand’s product, he or she takes their audience with them.”

As too much of traditional retail collapses amid lockdown, protests, and other long-building issues, we could see a golden opportunity for this new crop of influencers. What will be interesting is to see what talents emerge in the very different retail world coming toward us.