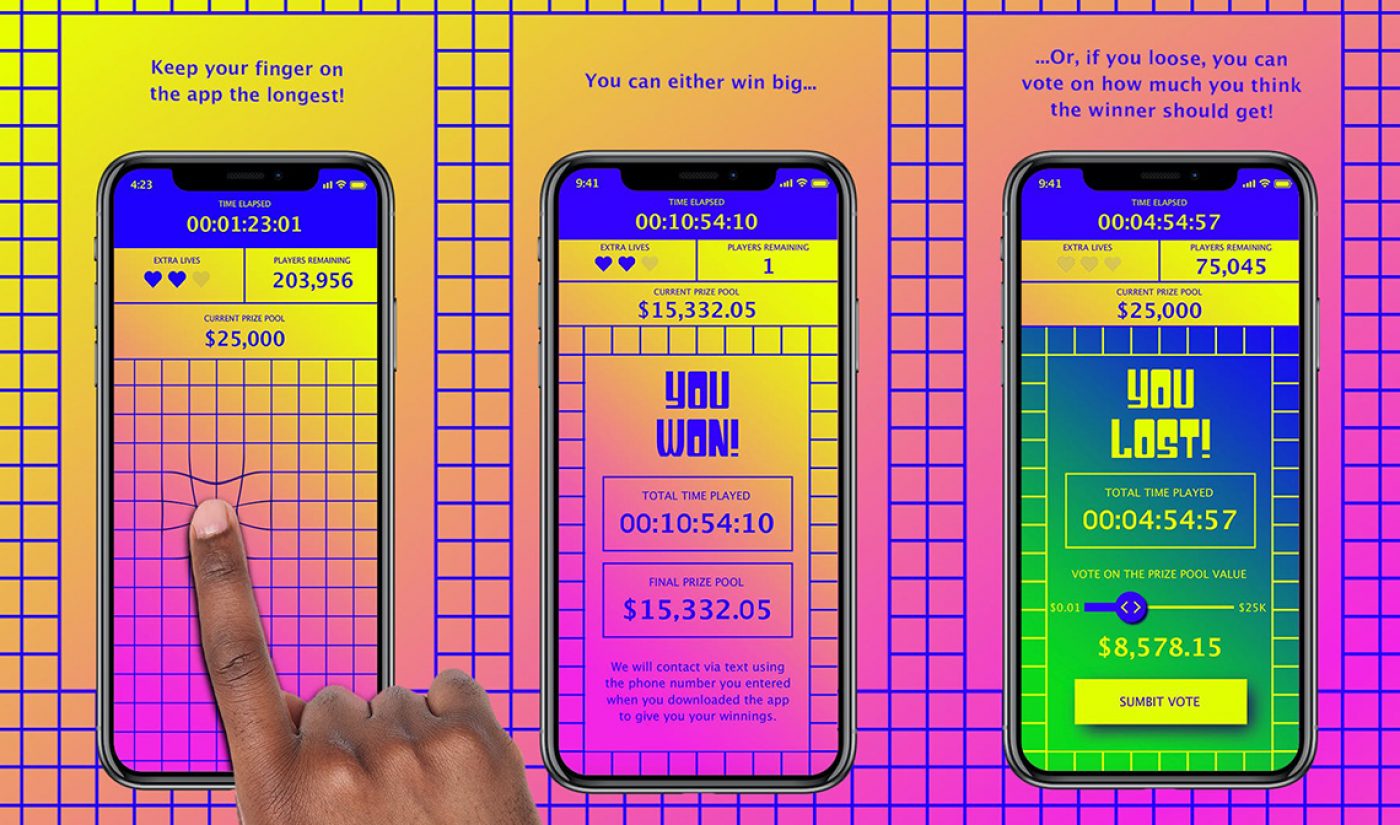 After a grueling 70 hours narrowed the Finger on the App player pool from one million down to just four people, gamemaster MrBeast officially called it quits.

“Dear the four remaining contestants with your finger still on the app, I’m ending it here,” he tweeted today at 1:14 p.m. Eastern. “Three days is insane!”

The famously generous YouTuber, who has nearly 38 million subscribers and nets a staggering 300 million views per month, is awarding $20,000 to each of the four, he added.

For those who don’t know what this whole Finger on the App thing is, here’s the deal: MrBeast (aka Jimmy Donaldson) teamed with “Banksy of the internet” startup MSCHF, which has built an entire business around doing one-time product drops. For this event, it made Finger on the App, a mass-participation version of the “last person to stop doing this thing wins the prize” contests that make up a significant portion of Donaldson’s YouTube content. The idea was that the player who could keep their finger in constant contact with the app the longest (which involved occasionally moving it in a specific way to prove they weren’t asleep/hadn’t taped their hand to their phone/etc) would win a cash prize.

Finger on the App kicked off at 3 p.m. Eastern June 30, with one million players. Thanks to Donaldson’s update tweets, we know that by 7 p.m. that night, the pool was down to 450,000. By midnight, it had whittled dramatically to just 1,500.

Some of that whittling was due to Siri, who apparently singlehandedly ruined the dreams of many a player with her full-screen popups:

Here is a montage of people losing the finger on the app challenge because of Siri 😅 pic.twitter.com/LzEDdASs0D

By 6:50 p.m. July 1, the final 54 players had emerged, with many of them streaming their progress and sharing strategies on YouTube, Twitch, and TikTok. (TikTok has been especially busy; videos hashtagged #fingerontheapp have collectively netted 105.9 million views.)

5 of the 54 people with their finger still on the app are streaming and I have them all on my monitor lol pic.twitter.com/Sdc6UiXf05

It wasn’t until the pool had shrunk to 15 (at around 3 p.m. June 2–almost exactly the 48-hour mark) that Donaldson got involved. “Should I call each of the remaining 15 players with their finger on the app to try and get some out?” he joked on Twitter. He proceeded to do so, calling the backup number players had given.

I’m calling all the 13 remaining contestants in the finger on the app challenge and one of them put their mom’s phone number in lol pic.twitter.com/P2D35MuweG

Those who picked up were offered a win-it-now amount of cash to drop out, in one case $2,000 (though the player refused). Donaldson then opened it up for players to negotiate with him. “Text me an offer,” he said.

He tweeted some of players’ cheekier responses:

This isn’t an offer 😂 pic.twitter.com/xCwKZLPHE4

An hour later, Donaldson put an end to the three days of madness. “GET SOME SLEEP!” he told the four winners.

At the game’s conclusion, the stated grand prize was around $17,000. The reward started at $25,000 on June 30, but each player who lost was permitted to vote on the amount they thought it should be, from $0 to $25K. The $17K-ish was an average of all the votes. But Donaldson, as is pretty usual, gave out more than he’d agreed to.

Donaldson also noted that there had been some attempts at cheating, including cases where people “time-traveled” by changing their phones’ settings to future times/dates–something that made it look like they’d participated for longer than they actually had. The MSCHF team had been prepared to combat this using backend measures that looked at pattern recognition and pressure applied to the screen, it tells Tubefilter. Donaldson himself verified all 20 of the final players were human and legit, either by speaking to them or watching their live streams.

Finger on the App may be over, but Donaldson’s not taking a break. Shortly after ending the game, he uploaded his newest video: