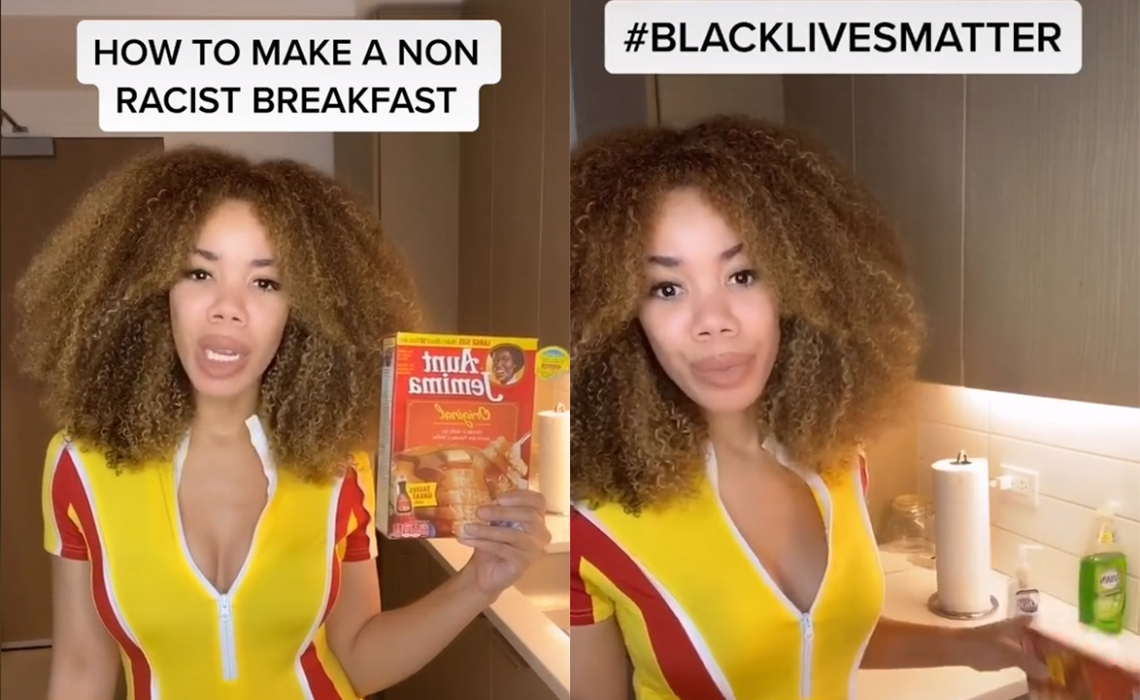 “As we work to make progress toward racial equality through several initiatives, we also must take a hard look at our portfolio of brands and ensure they reflect our values and meet our consumers’ expectations,” Kristen Kroepfl, VP and chief marketing officer of Quaker Foods North America (the PepsiCo subsidiary that produces Aunt Jemima), said in a statement. “We recognize Aunt Jemima’s origins are based on a racial stereotype.”

Kirby’s 41-second video has been viewed two million times on TikTok, and nearly five million times on Twitter. In it, she snags a box of Aunt Jemima mix from a fridge and tells viewers, “Did you know the name ‘Aunt Jemima’ means ‘slave mammy’ on the plantation South? Did you know the founder, Chris Rutt, a white man, got the name after attending a minstrel show? Think: blackface.”

She points out that the company brought in former slave Nancy Green to portray the “original” Aunt Jemima, a fictional character it used for advertising. As part of the portrayal, “she went around cooking pancakes and telling people stories of the good ol’ South,” Kirby explains. “And afterwards, they could take home a box of Aunt Jemima and that feeling of having their very own mammy.”

The video ends with Kirby tipping the mix down the kitchen sink. “Black lives matter, people,” she says. “Even over breakfast.”

After Twitter user @raiaah_ cross-posted Kirby’s video to that platform, it swiftly went viral, and “Aunt Jemima” became a trending topic. The next day, Pepsi said it would rebrand.

Kirby, who’s also on Twitter, shared screencaps of articles about the decision, writing, “Glory to God and Power to the People.” She also shared a thread of Black-owned pancake/syrup businesses:

If you’re still using Aunt Jemima Pancake and Syrup you need to ditch them now.

Please switch to these Black owned Pancake and Waffle Mixes and Syrup Businesses.

I added some history on the racist past on the Aunt Jemima brand in the thread.

To be clear, Pepsi still plans to sell the now-former Aunt Jemima products, but it will rename the brand and redesign the packaging. In a statement, the company said changes will appear on shelves in the fourth quarter of this year. It plans to announce the brand’s new name at a later date.

Since Pepsi’s announcement, several other brands–including Uncle Ben’s, Cream of Wheat, and Mrs. Butterworth’s–have announced they will look at making changes. Uncle Ben’s plans to “evolve” its packaging, which features a Black man, Cream of Wheat is “evaluating our packaging,” which also features a Black man, and Mrs. Butterworth’s will conduct a “complete review” of its brand and syrup bottle, which has been criticized for resembling a mammy jar.