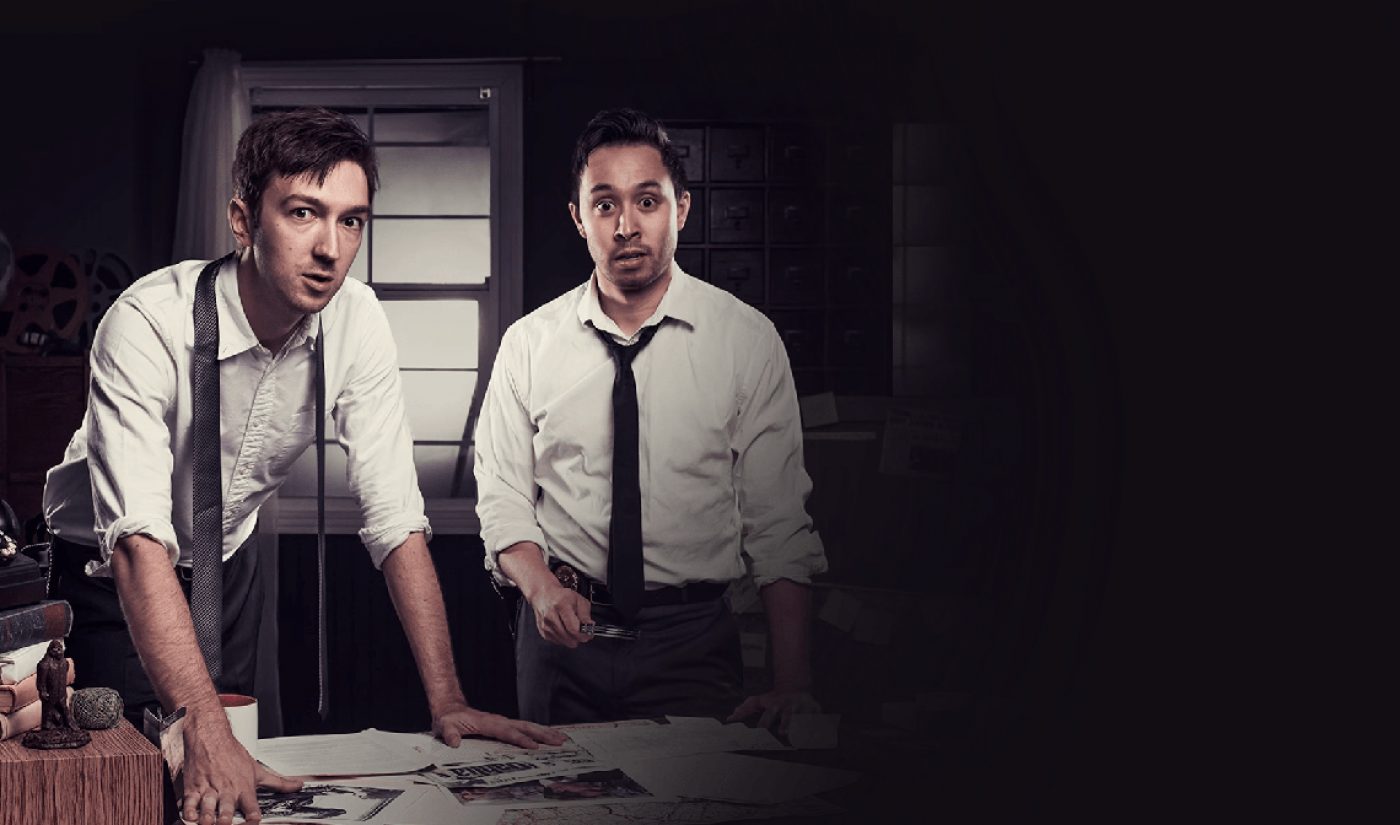 Hosts Ryan Bergara and Shane Madej (former BuzzFeeders turned cofounders of original studio Watcher) returned March 13 to take viewers through six episodes of true crime mysteries, from the death of Edgar Allan Poe to the Sheppard murders to the Lady of the Dunes. They capped off the season April 17 with Unsolved’s overall 100th episode.

And, of course, the season marked the aforementioned milestone–100 episodes of ghost-hunting, ghoul-chasing, and mystery investigating from Bergara (believer in most things ghost and ghoul) and Madej (skeptic of all things ghost and ghoul). The 100th episode revisited the very first case probed by Bergara and former short-term cohost Brent Bennett: the death of the Somerton Man.

For both Bergara and Madej, it was a chance to reflect on how far the series has come.

“That episode was one of those times where I was able to really look back at the start of this,” Bergara tells Tubefilter. “We started shooting this show with no camera. It was just an audio recorder in a room with me and Brent, and no crew. I did everything myself. And now we have an incredible team, which I’m very close to. The team we travel with on Unsolved is like a little family for Shane and I, so for them to all be there while we’re filming the hundredth episode, to celebrate that together, was a really special moment.”

“Sometimes I’ll think about things that happened around the time that the first episode aired and it feels like yesterday, but also like a decade ago. Especially considering all the places we’ve been to,” Madej chimes in. He gently needles Bergara (who’s known for being just a little more easily spooked), adding, “For some reason I think every time you visit a decrepit, dilapidated building, it probably shaves two years off your life. So you’ve probably aged like most presidents over these past four years.”

Bergara concludes that reaching 100 episodes has been “quite the journey, but it’s very easy for me to look back and still remember the first episode.”

In normal times, the two would be prepping to shoot Unsolved’s next season, but because of COVID-19, they’re stuck at home. Much of what they’re working on right now involves the nascent Watcher. Cofounded with Steven Lim (creator/star of BuzzFeed’s Worth It), Watcher (588K subscribers, 4M views per month) is currently airing previously made episodes of around 10 different shows, including Madej’s spirited Puppet History.

But though their creative focus is elsewhere while future Unsolved content is delayed, the show’s dedicated fandom is never far from Bergara and Madej’s minds.

“I am not an emotional human–currently, at least,” Madej deadpans. “But we’ve just been receiving so many tweets and messages from people who are like, ‘Oh, I’m watching Unsolved with my family while we’re all in quarantine.’ It’s been nice to know that we can make people feel a little less alone during this very strange time in all our lives. And it goes two ways. It makes us feel a little less alone as well.”