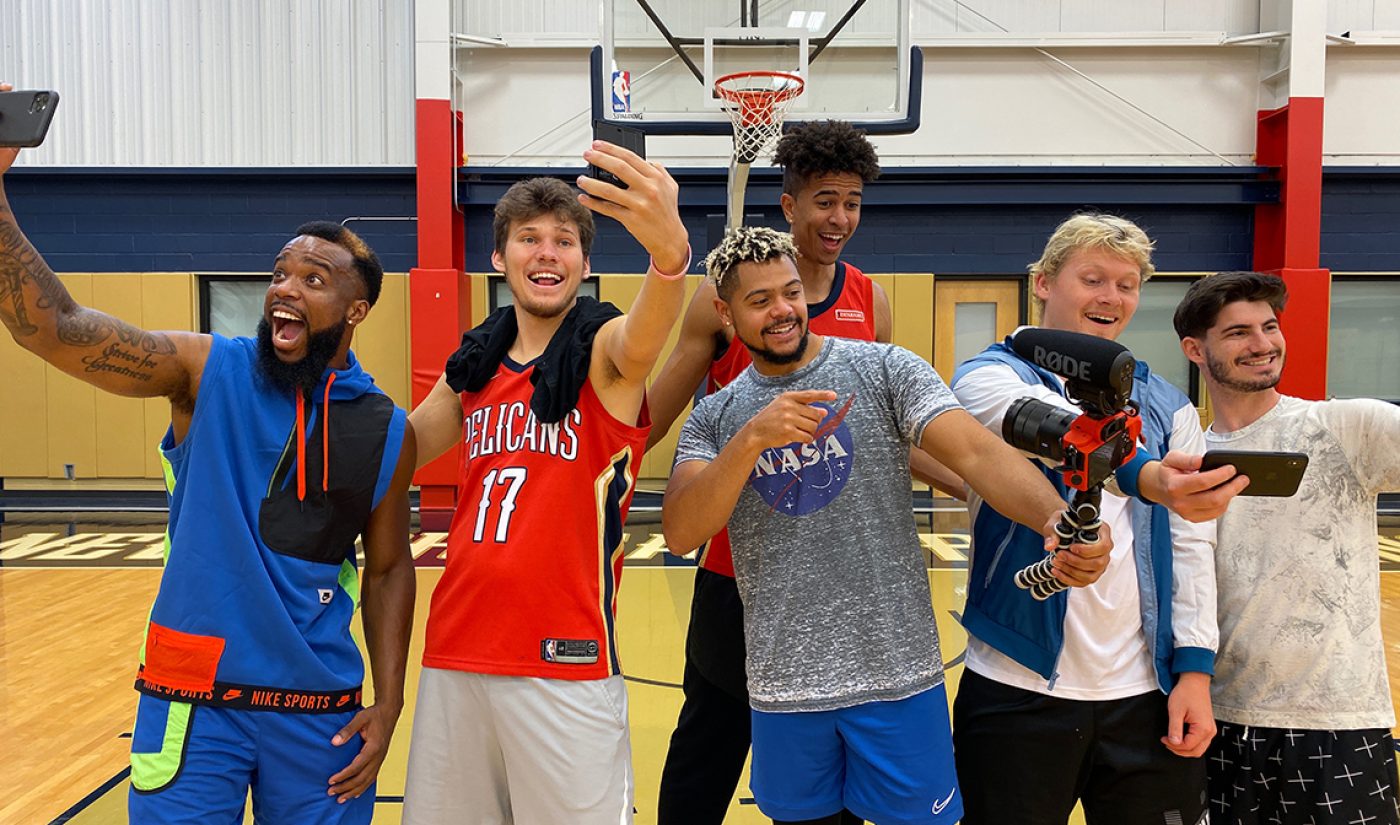 The magic of online friendship doesn’t always carry over IRL–but for the six members of today’s Millionaire group, it definitely did.

The six of them met when they were scattered across the U.S. Brothers Jesser and Jiedel (aka Jesse and James) grew up with Mopi (aka Tyler) in Los Angeles, while Zack is from Ohio, Cash is from Louisiana, and London is from “all over.” All of them were YouTubers, and all of them were avid fans of video games like NBA 2K, so it was natural for them to start recording their gaming sessions for upload to their individual channels.

Those uploads drew fans–and it was fans who made them consider becoming an official collective. “Since we played and were primarily known for making entertaining NBA 2K content, everyone would refer to us as the ‘2K House,’” the group says. The idea of presenting themselves as a unit (and a brand ripe for sponsorships) was appealing, but they didn’t want to solely be known for their 2K gameplay. So they mixed it up: kept the 2 in honor, and chose HYPE as the word to encapsulate them all.

They launched their group channel exactly one year ago, and have since put out 49 videos. In normal times, they keep to a strict production schedule, because each of them participates in every single 2HYPE upload. They meet once per week to plan ahead, coordinating group and solo filming days to produce one video for the shared channel, and guest star spots in videos for their individual channels.

2HYPE had just gotten into a routine where they filmed one IRL sports video per week at a local gym when COVID-19 shutdowns knocked their plans off course. For now, their group content is a bit of a reset: they’re back to long-distance gaming videos, just like old times.

2HYPE: It feels pretty dope hitting one million subscribers. Just seeing that many people show that much support for all the hard work we put in as a group. There are lots of group channels on YouTube, but we feel that the way we share our passion for sports, gaming, and sneakers through doing fun challenges really helps differentiate us from others, and we can’t say thank you enough to the fans. All we can do to show our appreciation is continue to set our standards high and keep pushing out content we enjoy.

Tubefilter: Tell us a little about each of you! Where are you all from? How did you meet?

2HYPE: Kris is from all over, but mostly Houston. Cash is from Louisiana. Zack is from Ohio. Jesse, James, and Tyler are all from Los Angeles. (James and Jesse are actually brothers who grew up with Tyler.) We all met as a group through online gaming.

Tubefilter: When and why did you decide to launch a YouTube channel together? Did you come into the channel knowing exactly what kind of content you wanted to make, or have you developed your strategy over time?

2HYPE: Since we played and were primarily known for making entertaining NBA 2K content, everyone would refer to us as the “2K House.” While we appreciate NBA 2K, there’s more we wanted to be known for than just that game, so we wanted to have our own group name–and that’s how the name “2HYPE” came about. Our manager, Dan Levitt from Long Haul, also suggested early on that we start a group channel, as he felt growing the 2HYPE brand through regular content may help bring us some larger opportunities, which it definitely has. It took a while before we actually launched it, but over time, we felt more confident as an established group and wanted a channel to post our best group content, which will always involve each member of the group and our best ideas. The fan reception has been amazingly positive.

Tubefilter: Speaking of content…You have a pretty diverse mix of videos going on! How do you choose what to film?

2HYPE: It can be a struggle at times, since sometimes we feel we’ve literally done EVERYTHING. Typically, we put our own unique twist on internet trends or film our most popular video ideas from our personal channels, along with occasional vlogs in a style you wouldn’t normally see from us individually.

Tubefilter: You all also manage your own active solo channels in addition to 2HYPE. How do you split your time between 2HYPE and your own channels? Do all of you participate in every video? How does 2HYPE content differ from your solo content?

2HYPE: So over the years we’ve learned the only way for us to work actively on our personal channels and the group channel is proper time management. Every week, we plan out who’s filming what and who’s in whose videos. We all have pretty busy schedules now personally, so it’s very important we have a video recording routine schedule and we try to include each other in our solo videos as much as possible.

Tubefilter: What’s the best part of being in 2HYPE?

2HYPE: The best part about the group is it never really feels like a job. It’s really just us recording together, which we genuinely love to do, and you can see that in the videos. Also, we’ve not only grown as a group of friends, but as better content creators, too. We learn a lot from each other, and you can see our solo channels evolve as the group channel evolves.

Tubefilter: We feel like it’s probably weird to do this without mentioning the pandemic, so how are things going with social distancing? Have you stopped filming? Do you have a backlog of videos to upload?

2HYPE: We had a few backlog videos in the basketball gym, but it’s been a struggle for us. We had just gotten into a routine of filming content in the gym every week before everything shut down. But now we pretty much focus more on gaming and any ideas that we can still do at home. Honestly, the pandemic has made us all think more creatively about our ideas, since we are so limited at the moment.

Tubefilter: What are your favorite kinds of videos to film?

2HYPE: Our Mafia videos are pretty fun, and a fan favorite, and any time we do mini-hoop/pool basketball videos, those are always fun to film.

2HYPE: Our next thing is expanding our ideas and quality to make our videos even better. We definitely want to do more events, like 5v5 basketball games, across the country, and even across the globe. Once it’s safe, we’re definitely looking forward to meeting and playing basketball in front of our fans again!

You can add yourself to the ranks of 2HYPE’s more-than-a-million YouTube subscribers at their channel YouTube.com/2HYPE.