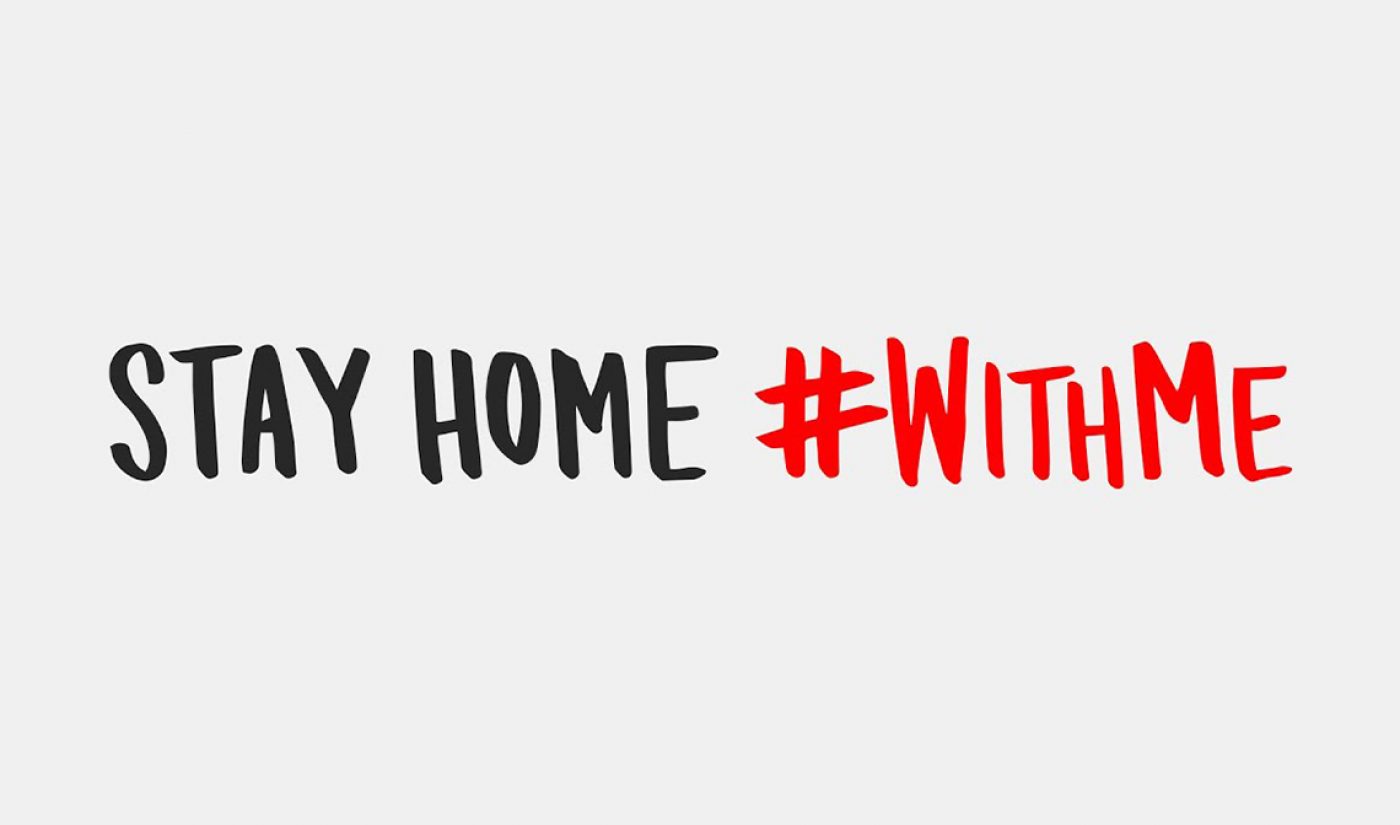 “When COVID-19 struck and the quarantine began, we had to take all of our traditional shows and put them on ice, anything that required a stage, a crew, or a group,” Susanne Daniels, YouTube’s global head of original content, told Deadline. She added that after YouTube launched its #WithMe social distancing campaign in March, it saw watchtime across the platform go “through the roof,” and wanted to make content to capture that increased viewership.

“YouTube’s greatest strength is its ability as a global platform to build community and connection among people from all walks of life,” Daniels added in a statement. “We’re working to develop exciting new original content that is relevant, useful, and entertaining in order to deepen those connections and give people an outlet to come together.”

YouTube announced 11 of those projects today, all of which are slated to premiere between now and the end of May. Some feature traditional celebrity hosts and guests, including Joseph Gordon-Levitt, Ken Jeong, Karlie Kloss, Bill Nye, and Terry Crews.

I’ll be hosting a livestream with YouTube Originals where the biggest influencers will compete in a Rock, paper, Scissors tournament(cause why not haha) over the internet. Winner gets $250k to donate to charity to help with the global pandemic. Tune in April 25th 3PM PT! @YouTube

At least six of the projects will star YouTubers. First up, famously generous MrBeast–whose real name is Jimmy Donaldson–will host The Creator Games, a livestreamed, long-distance tournament of games like rock, paper, scissors taking place April 25 at 6 p.m. EST. In a tweet about the event–produced by his management company Night Media and studio Fly on the Wall–MrBeast said it’ll involve “the biggest influencers” on YouTube, and that the winner will receive $250,000 to donate to the coronavirus relief organization of their choice. Participants will be announced tomorrow, he added.

Next is #MoveWithMe, an International Dance Day special hosted by Steffanina and slated for April 29–the date of said holiday. He’ll bring dozens of professional dancers and choreographers together (virtually, of course) for performances set to chart-topping songs. Proceeds from the event will go toward the World Health Organization‘s COVID-19 Solidarity Response Fund.

After that is an official Stream #WithMe broadcast, debuting April 30. According to YouTube, it’ll focus on “a star-studded crew of some of the U.K.’s most loved YouTube creators and stars,” who will spend four hours performing for and chatting with viewers. Participants haven’t yet been announced. Benefits from the stream will go toward NHS Charities Together.

Then, on May 19, YouTube will bow five-part series The Secret Life of Lele Pons, which chronicles the titular creator’s struggles with Tourette syndrome and obsessive-compulsive disorder.

You can see a trailer for the special here:

And last but not least, Zurita and Luisito Communica, two of YouTube’s most prominent Latin American creators, are putting together an as-yet-untitled docuseries about COVID-19. They’ll conduct webcam interviews with people from around the world, including YouTubers and health experts, asking them to “reflect on their reality, their challenges, their hopes, their solutions, their stories of inspiration, and most importantly, the resilience of human nature,” per YouTube.

You can see complete descriptions for all 11 currently announced projects, courtesy of YouTube, below.

In this new Learning Playlist, a roundtable of leading female financial experts provide answers to the questions surrounding personal finances that we are all desperate to know. Offering a step by step guide for viewers, this first series of videos covers pressing questions about filing taxes and the COVID-19 stimulus check. “Money Talks” is produced by Refinery29.

A global LIVE event where popular YouTube creator, MrBeast (34M subscribers), challenges the platform’s biggest stars to remotely go head-to-head in a first-of-its-kind battle of stay-at-home games where there can be only one winner. “The Creator Games Presented by MrBeast” will encourage viewers to donate to support COVID-19-related charitable organizations and is produced by Night Media and Fly On the Wall.

This weekly episodic series follows UK recording artist, YUNGBLUD, through a month at a rental apartment in L.A. Along with four friends – his manager, videographer and two bandmates with whom he is quarantined – YUNGBLUD attempts to shoot a music video, write new songs, cook meals and stay connected to his UK-based family and avid global fanbase, all within the disconcerting shelter-at-home restrictions. “Stay Home With: YUNGBLUD” will encourage viewers to donate to support No Kid Hungry and is produced by Stick Figure Entertainment.

In celebration of International Dance Day (April 29), this special will feature acclaimed choreographer Matt Steffanina as host, and talented dancers and choreographers from across the globe as they come together to provide dance-lovers with high octane performances to today’s chart topping songs in a way that can only be done on YouTube. Choreographers and dancers including LaurieAnn Gibson, WilldaBeast Adams, Chachi Gonzales, Kasia Jukowska, Vale Merino, Sonali Bhadauria, FitDance, Kaelynn KK Harris, Twist And Pulse, D-trix and more will be featured. “#MoveWithMe” will encourage viewers to donate to support the COVID-19 Solidarity Response Fund for WHO during the event and is produced by Den of Thieves.

In “Stream #WithMe,” a star-studded crew of some of the UK’s most loved YouTube creators and stars let us in on how they are coping with the lockdown experience in a livestream celebration of solidarity. The all-star group of creators and celebrities will share tips on how to keep entertained, upbeat, and active as they tag-team their way through four hours of joyful unexpected performances and exciting challenges culminating in an almighty stunt for the nation. “Stream #WithMe” will encourage viewers to donate to support NHS Charities Together and is made in partnership with Electric Robin (part of EndemolShine UK).

Around the world, millions of students are joining virtual classrooms as part of the current distance learning initiative and teachers are looking for ways to keep their students engaged and focused to stay on target with their curriculum. In this series, some of the brightest celebrities and educators come together to energize distance learning. In each episode, a celebrity steps in to teach crucial high school lessons with real teachers. Some examples include Karlie Kloss working through a coding problem, or Ken Jeong giving a biology lesson that will be remembered for years to come. Additional celebrity substitutes include: Bill Nye, Camila Mendes, Janelle Monáe, and Terry Crews. “Celebrity Substitute” is produced by B17 Entertainment.

The Secret Life of Lele Pons — Series Premieres May 19

In this raw and intimate five-part series, internet personality and music artist Lele Pons shares a side to her that no one knows about… Her lifelong struggle with Tourette Syndrome and OCD. Viewers will follow along on her journey of building and expanding her music career while battling what was previously hidden. Link to official trailer HERE. “The Secret Life of Lele Pons” is a Shots Studios Production.

The critically-acclaimed monthly book club, “BookTube,” is creating a special “Read With Me” episode premiering May 21. Now more than ever, people around the world are turning to books to help them feel connected. This special episode will feature several celebrities, booktubers, and authors – including Melinda Gates, John Grisham, James Patterson, Elizabeth Gilbert, Nicholas Sparks, Elaine Welteroth, and many more – sharing their current book recommendations. Additionally, the June 2020 episode of “BookTube” will feature authors Dr. Vivek Murthy, former U.S. Surgeon General (author of Together: The Healing Power of Human Connection in a Sometimes Lonely World), Lori Gottlieb (author of Maybe You Should Talk to Someone) and Haemin Sunim (author of The Things You Can Only See When You Slow Down) discussing anxiety, mental health, and advice for self care during these uncertain times. “BookTube” is produced by Boardwalk Pictures.

This mini-series, hosted by Joseph Gordon-Levitt, invites friends and families from all over the world who are coping with this unprecedented time of isolation to come together and showcase their creativity and collaboration. Rather than profiling lone artists and showcasing their finished work, each weekly episode will document the creative process as people find each other online and remotely collaborate on a variety of family friendly projects—short films, short documentaries, music videos, and more. Anybody can come be a part of the show on HITRECORD, Gordon-Levitt’s Emmy-winning platform for creative collaboration. “Create Together #WithMe,” is produced by Brian Graden Media and HITRECORD.

A social media mystery in a social distancing era! This scripted event series follows a group of bored teens working together online to solve a mystery involving one of their neighbors. Shot entirely via webcam and smartphone, “Locked Down” is a suspenseful look at how young people stay in touch while having to stay away, as well as what happens when boredom leads to suspicion. The story unfolds almost in real-time as the friend group works together – from a distance – to solve the mystery, while also exploring their own anxieties and frustrations about life during a pandemic. “Locked Down” is created and produced by Toronto-based Sinking Ship Entertainment (Dino Dana, Endlings, Odd Squad).

Latin America’s top YouTube creators Juanpa Zurita (10.2M subscribers) and Luisito Communica (30.6M subscribers) come together for the first time to document an unprecedented situation (COVID-19 quarantine) in an unprecedented way. Filmed entirely under quarantine with no physical interaction, viewers will hear first hand personal stories from around the globe, including YouTube creators, health specialists, and everyday people as they reflect on their reality. Their challenges, their hopes, their solutions, their stories of inspiration and most importantly the resilience of human nature. This limited series will give a voice to individuals around the globe to unify us regardless of region or language. This project is produced by DW Entertainment & Media.