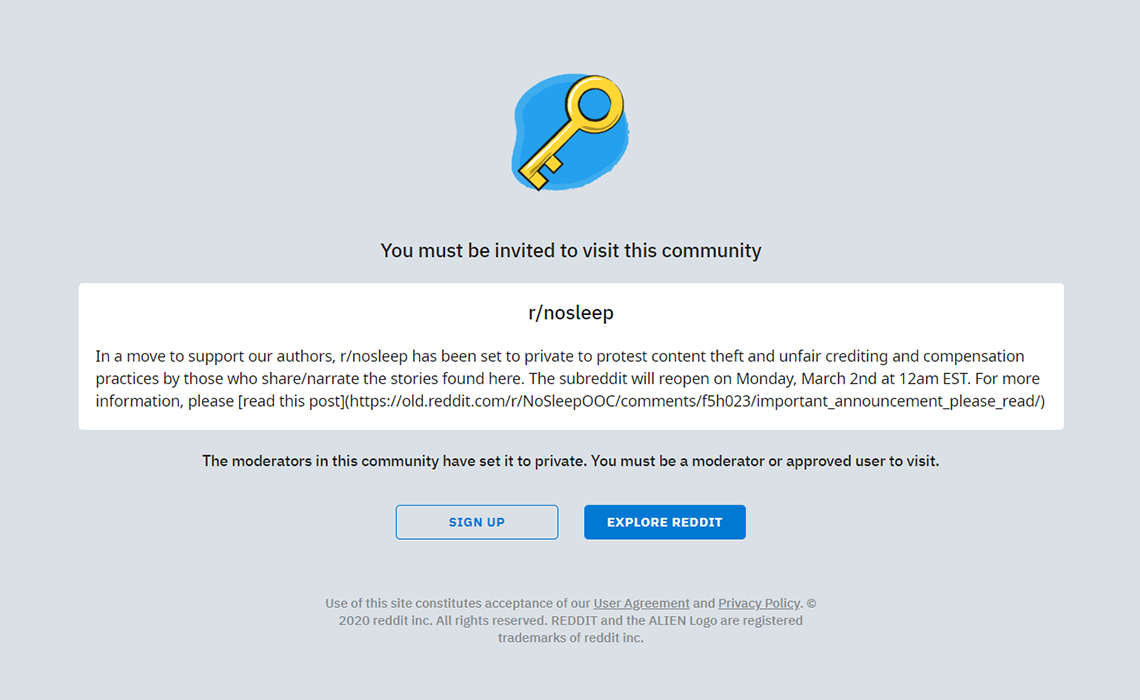 One of Reddit’s most well-known subcommunities has gone private for a week to protest “content theft and unfair crediting and compensation practices by those who share/narrate the stories found here,” according to a notice posted by moderators (pictured above).

r/nosleep has more than 14 million members who gather to post original horror stories. Its core rule is that writers must make their stories genuinely believable–a stipulation that’s earned it a reputation as The Blair Witch Project of horror subreddits. (The found footage film’s director, Adam Wingard, famously promoted the film as if it were a recording of actual events, going so far as to have IMDb list the cast as missing or dead for a full year after its release.)

As r/nosleep’s trove of clever creepiness has grown, it’s drawn in narrators who want to take stories from text to audio. In 2011, a group of them launched the official NoSleep Podcast, which has been airing every week since, featuring volunteer storytellers and narrators.

But while The NoSleep Podcast has permission from everyone whose content is being used, some other narrators don’t. r/nosleep is a notorious picking patch for people who take stories, read them aloud, pair their narrations with some eerie imagery, and post the video online without crediting the original r/nosleep author. YouTube is one of the primary repositories r/nosleep pirates use—and though the platform has an aggressive copyright infringement-busting system, that system operates by comparing an uploaded video to its library of reference audio tracks like songs and movies. It’s simply not built for catching text that’s been turned into audio.

r/nosleep’s mods and community have attempted, in turn, to reason with and police pirate narrators themselves. In 2018, the mods launched r/NosleepWritersGuild, an official collective bargaining body of r/nosleep writers with a goal to “create a constructive dialogue between writers and narrators to allow for simpler and more effective collaboration.” Then, last year, they founded r/SleeplessWatchdogs, a community of people who comb the internet for stolen nosleep content and alert authors whose works have been repurposed without permission and/or credit.

Most recently, they specifically targeted YouTube pirates, opening r/YTNarratorsGuild, which “was founded to help narrators understand copyright law and give them the tools to properly contact authors in regards to the use of their work.”

Despite all this, the problem has steadily grown worse, says TJ Lea. Lea has been a YouTuber since 2006, is a longtime r/nosleep moderator, and wrote one of the community’s top stories, The Expressionless. He’s also the organizer of r/TheWritersBlackout, nosleep’s official one-week shutdown.

In a YouTube video about the blackout, Lea says The Expressionless and other r/nosleep works are under a Creative Commons license that disallows commercial uses. This license lets anyone share, use, and remix a work without permission unless they are doing so in a way that’ll earn them profit. When a YouTuber earns AdSense revenue off a video where they’re reading an r/nosleep story without permission, that’s a violation of YouTube TOS and copyright law, Lea explains.

“Permission must always be asked for, and even though there’s a grey area here, it’s considered highly immoral and unethical to profit off someone else’s work,” he says.

In his video, Lea shares screenshots of his email exchange with a YouTuber where he successfully lobbied to be paid the AdSense money that creator received from a video where they used The Expressionless. The YouTuber appears to have conceded with little fight, but if a creator were to push back, legally forcing them to hand over money for reading a story posted on the internet could be more difficult than pursuing them for posting published works like film clips or audiobook snippets.

Getting YouTube to pull down a video featuring stolen r/nosleep content should be easier, as YouTube’s TOS does bar users from earning AdSense revenue on other people’s content. So long as a writer can prove they wrote a story and that it has a CC non-commercial license, they’re good to go–but that’s if they manage to find the video containing their content in the first place.

Anyone who tries to access r/nosleep between now and March 2 will be linked to a statement from mods that makes it clear this shutdown isn’t only a protest. It’s also a warning.

“If the authors are not treated fairly and their work is continuously used in ways that break copyright laws, they will stop posting here,” they wrote. “We hope that, during our time away, our community will do their best to learn and understand authors’ rights and what they have gone through to exercise and protect them.”

‘Spill’ Is A Drama YouTuber Who’s Gotten Nearly 100 Million Views In 11 Months. But She Might Not Be A Real Person.