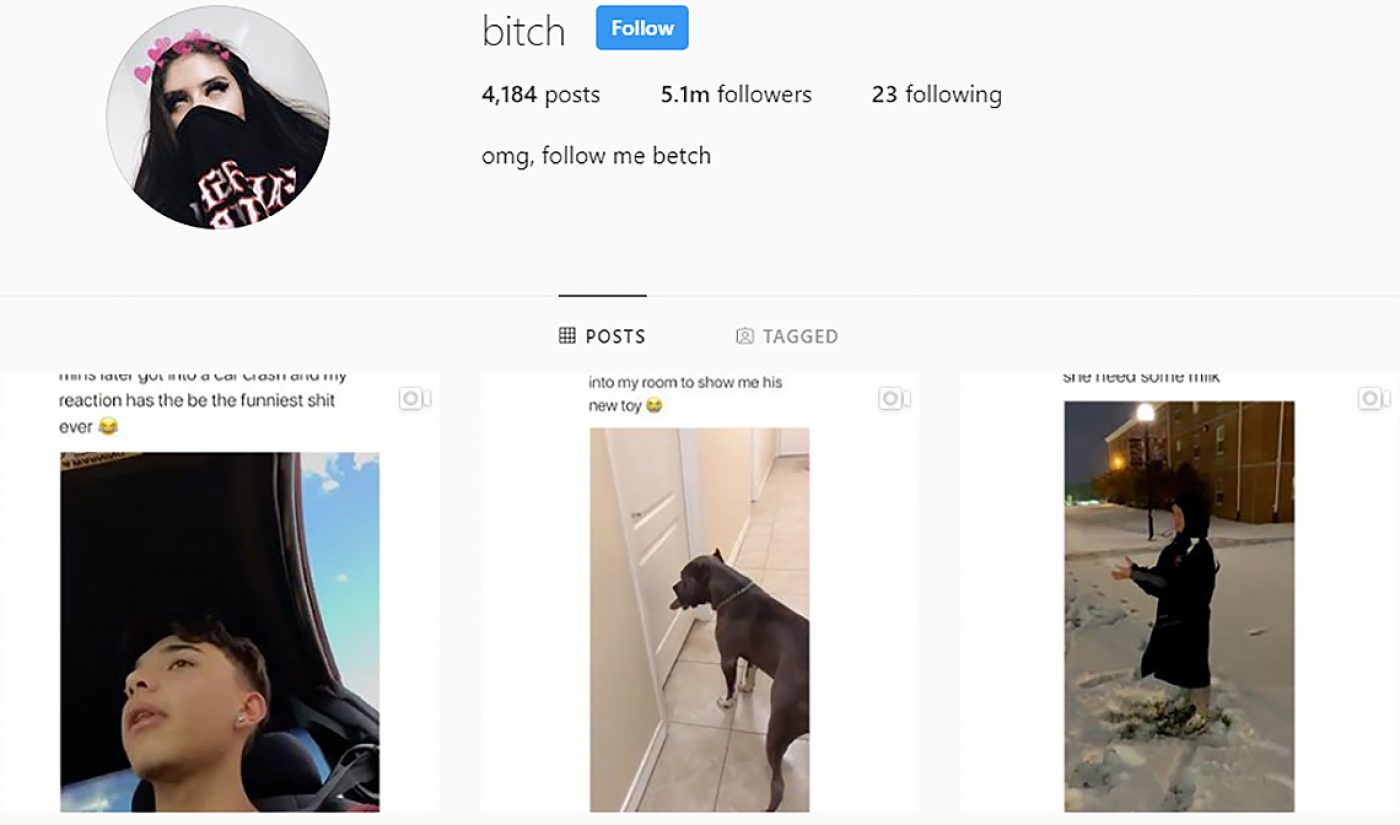 Every social media platform has major players who’ve amassed millions of followers — and vast sums of dollars in brand deals — not by posting their own content, but by posting content culled from the accounts of celebrities and average internet users alike. Possibly the most infamous is Fuckjerry, a 14.5M follower-strong Instagram account that spawned the eponymous edgy marketing company responsible for Fyre Fest’s slick, supermodel-stuffed promo video.

For years, Fuckjerry reposted viral memes and other content without asking creators’ permission or crediting them. (And, of course, it didn’t share any of the tens of thousands of dollars it reportedly netted per brand deal thanks to the follower count and engagement it earned by creators’ reposted content.) It wasn’t until this past February, shortly after Netflix and Hulu’s Fyre Fest documentaries premiered, that a wave of backlash against the account’s practices prompted Fuckjerry’s owner, Elliot Tebele, to promise that Fuckjerry would stop posting content without creators’ explicit consent.

Another notable reposter who built a business off creators’ content: Josh Ostrovsky, whose Instagram account @thefatjewish is a repository for other people’s jokes and memes. He too has faced backlash (particularly from comedians whose jokes he stole), but @thefatjewish still has 11.1M followers, and that kind of clout commands deals and dollars, regardless of how it was achieved. The latest example is Ostrovsky’s company Swish Beverages, now the official wine of the NFL. The product wouldn’t have been possible without Ostrovsky’s account, and is powered by @thefatjewish — with supermodel Emily Ratajkowski on board as its “chief of taste,” to boot.

While Fuckjerry and Ostrovsky are particularly well-known reposters, they’re far from the only ones. There are tens, if not hundreds of thousands of reposting accounts across the internet. They poach creators’ videos, photos, and posts without their permission and under the banner of “curation,” without crediting them for making the very content that’s raking in those followers, views, and likes.

@bitch, however, does things differently.

Credit Where Credit Is Due

From the very beginning, the Instagram account’s anonymous owner was committed to crediting creators. Over their years on social media, they’d developed a kind of “sixth sense” for which videos across platforms — like Instagram, Facebook, Twitter, and Reddit — were destined to go viral, “even if they seem like any other video on the internet to someone not in my position,” they tell Tubefilter.

When they launched @bitch in 2016, their strategy was simple: use that “sixth sense” to find future viral content, ask the creators of said content for permission to share it, “always be the first to post,” and then, crucially, always credit creators. Every single piece of content @bitch posts links out to the original creator’s social media handle, which means the account’s 5.1M followers and impressive engagement stats — 250K-500K likes per post, 1K comments per post, and 300M monthly impressions — pay off for creators as well as @bitch.

something i’d do (via: @jpgzanetti)

In @bitch’s early days, its owner “used to spend all day from the time I woke up to the time I slept” combing the internet for the next big thing in social video and reaching out to content creators for permission to share. That’s how they found digital talent network Collab.

“Bitch was constantly running into Collab’s licensing team,” Collab, which handles digital rights management for many of its creator clients, tells Tubefilter. “These interactions eventually led to @bitch reaching out to Collab to ask more about the processes of licensing viral videos and finding ways to take the brand to the next level.”

In June 2018, @bitch officially signed on with Collab, a move that’s helped its owner “streamline my processes through tech,” they say.

Collab’s homegrown licensing tech (a system called UNCLE) goes to work for @bitch and the account’s featured content creators in multiple ways. First, it does what @bitch’s owner once did entirely manually: processes hundreds of thousands of videos per week, scanning for a soon-to-be hit clip. Then, once UNCLE has identified something that would fit with @bitch’s content, Collab and @bitch work together with the video’s creator to officially license it, getting signed-and-sealed permission to share the video and, in some cases, arranging monetization. (Collab says it doesn’t have an exact figure on how many videos earn money for their creators. It doesn’t publicize what percentage of revenue goes to creators.)

Around 95% of creators contacted by Collab and @bitch agree to have their content reposted, Collab says.

Monetization isn’t the only way creators can make money by being featured on @bitch. Collab also licenses out videos to brands and media companies. So if, say, a video of a pit bull being a very good boy (see below) goes viral thanks to @bitch, its creator can earn revenue if Collab licenses it out to a TV show that collects clips of pets, to a news channel that wants to air it, or to a marketing company that wants to use it in an ad.

And even if creators don’t end up earning money from content posted by @bitch, the account’s commitment to crediting can drive eyeballs their way and help them establish a digital presence. Collab says it’s seen multiple creators who, after their pet-related clips went viral on @bitch, made accounts for said pets, and “went from there.”

it clearly wasn’t him (via: @taylor_clout)

In the 18 months since @bitch teamed up with Collab, it’s expanded its brand from Instagram-only to Facebook, where (under the more PG name “Betch”) it has 575K followers and nets an average of 140M minutes of watch time per month. There are also plans to soon expand @bitch to a non-social-media distribution channel — but those are currently under wraps.

Though things have shifted a bit for the account’s curator, who now has UNCLE to help aggregate content and Collab to shoulder much of the reaching-out-to-creators part of the @bitch business, their strategy is still the same as it was on day one: be fast to find fresh videos, first to post them, and fair to the creators who made them.