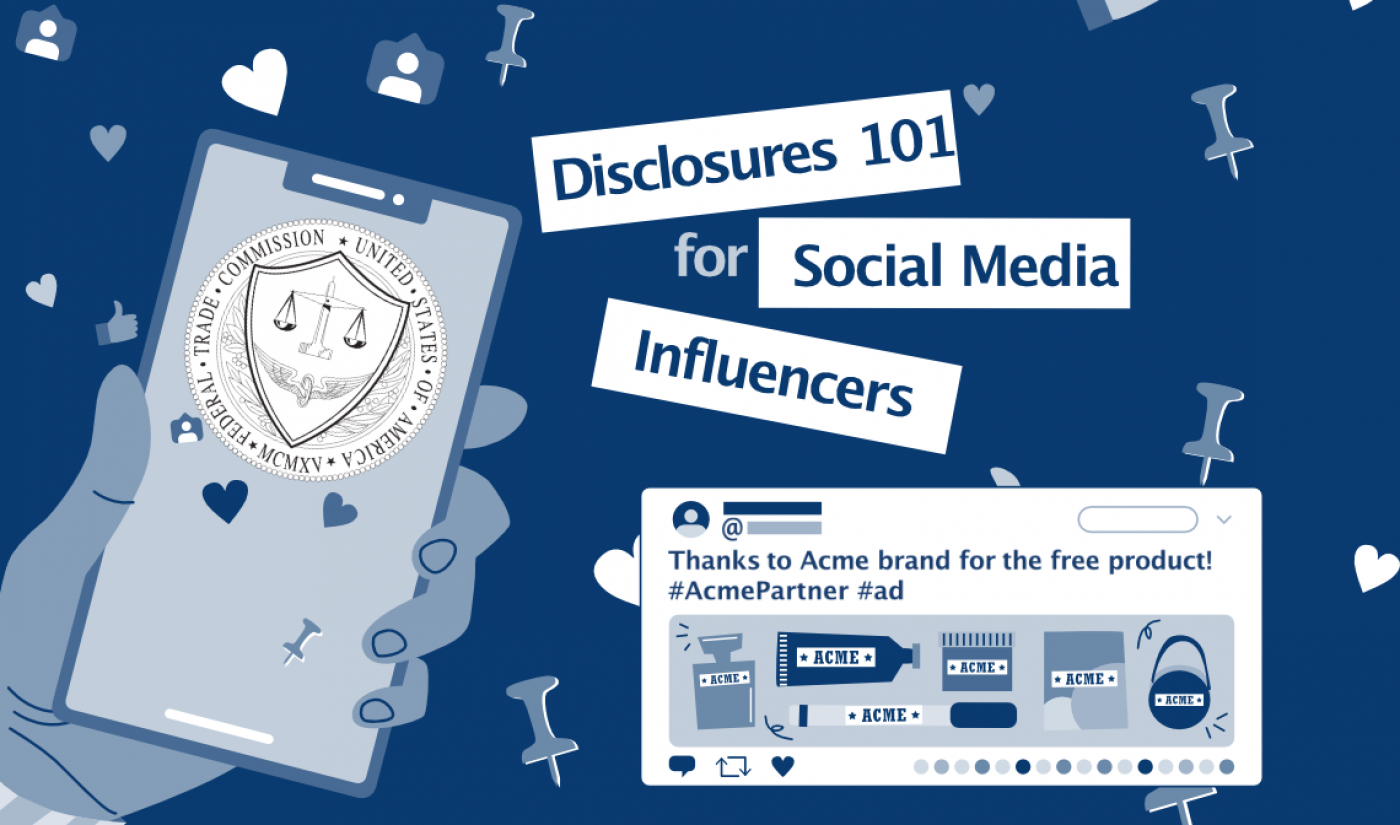 This week, the Federal Trade Commission (FTC) released updated sponsored content disclosure guidelines for social media influencers. The guidelines serve as a reminder to anyone promoting a product or brand on social media in exchange for money, free products, or some other benefit, that any such content must be clearly designated as being a sponsored endorsement.

To help influencers understand the updates, the FTC released its first-ever creator-friendly brochure, Disclosures 101 for Social Media Influencers. The eight-page (six pages if you take away the cover and end page) guide covers the specifics of properly disclosing material connections when sharing sponsored content. The underlying content and takeaways are substantially the same as previous guidance released as part of the FTC’s Endorsement Guides: What People are Asking, a Q&A-style document updated from time to time by the FTC.

“This new format,” attorney Kimberly Culp tells me, “may indicate an awareness on the part of the FTC that influencers oftentimes do not adequately disclose their material connection with a brand.” Culp, a Silicon Valley-based advertising and intellectual property attorney at Carr McClellan, frequently works with digital media and video game companies, assisting in interpreting the practical applications of disclosure laws.

In addition to the influencer-friendly guide, the FTC posted three new instructional videos (below) to its official FTC YouTube channel. All three feature FTC attorney Amber Lee giving an overview of best practices (which are also covered in the brochure).

The FTC additionally launched a dedicated URL, ftc.gov/influencers, for social media influencers, and is heavily promoting the new URL as part of the videos and brochure materials.

Here’s What Influencers Need To Know

The FTC is a U.S. government agency that is focused on consumer protection and preventing deceptive and unfair business practices (including antitrust and anticompetitive behavior). As such, it’s heavily focused on promoting the proper disclosure of sponsored content across all social media platforms.

The recently released resources focus specifically on influencers and the responsibility — and accompanying legal liability — they have when deciding to share commercial content through their social media accounts. However, it’s equally important to remember that the same guidelines apply to businesses and agencies working with influencers. Typically, the rules and guidelines from the FTC are mentioned in the contracts between brands, agencies, and influencers.

At their core, the rules and guidelines aim to stop deceptive advertising and ensure that anyone looking at an influencer’s sponsored content, whether that’s a YouTube video, an Instagram or Facebook post, a tweet, or a Snapchat pic, is immediately aware the influencer has a material connection to the brand they’re posting about. And that doesn’t necessarily mean influencers only need to include a disclosure when a brand pays them in cash. As the FTC explains, a “material connection” between an influencer and a brand can be “a personal, family, or employment relationship or a financial relationship – such as the brand paying [an influencer] or giving [an influencer] free or discounted products or services.”

The FTC’s new guidelines highlight the two key characteristics of a proper endorsement disclosure: (1) placement of a disclosure should be “hard to miss”; and (2) the disclosure should be “clear and simple.” A simple thank-you to the brand or the use of truncated or vague hashtags like #spon or #collab isn’t enough. (The use of #ad or #sponsored is enough; however, notably, the FTC’s creator-friendly guide lets influencers know that they don’t need to tack those hashtags on to posts that are already clearly marked as sponsored content.)

Another important point is that an influencer should not assume that a platform’s built-in disclosure tools (such as the “This video contains paid promotion such as paid product placement, sponsorships or endorsement” box YouTube offers for creators to click as they’re uploading a video) will sufficiently indicate content is sponsored, since the disclosure may not always be available to every audience or their specific device.

(Speaking of content availability, these guidelines, though put forth by a U.S. agency, could impact creators outside the United States. The FTC says that U.S. law, as well as any applicable foreign laws, will apply “if it’s reasonably foreseeable” that sponsored content will impact, or influence, a consumer who is stateside.)

Another thing creators should pay attention to with these updates: “One issue that perhaps gets a bit more emphasis in the Disclosures 101 than in prior guidance is that personal, family, or employment relationships are also material connections,” Culp says.

Culp points to a letter nonprofit watchdog organization Truth in Advertising sent to the FTC this past March. The organization had followed up on warnings the FTC sent influencers back in 2017, and the results were dim.

“At least 20 of the 21 influencers who received follow-up warning letters from the FTC in 2017,” Culp notes, per information in the letter, “were still not disclosing their material connection to a brand.” The letter “urged the FTC to expand its investigation into social media influencer marketing.”

The release of these resources could point to future actions the FTC plans to take against social media influencers — actions that could range from new warning letters to formal complaints.

As the FTC makes clear to creators in the new materials, “It’s your responsibility to make these disclosures, to be familiar with the Endorsement Guides, and to comply with laws against deceptive ads.”