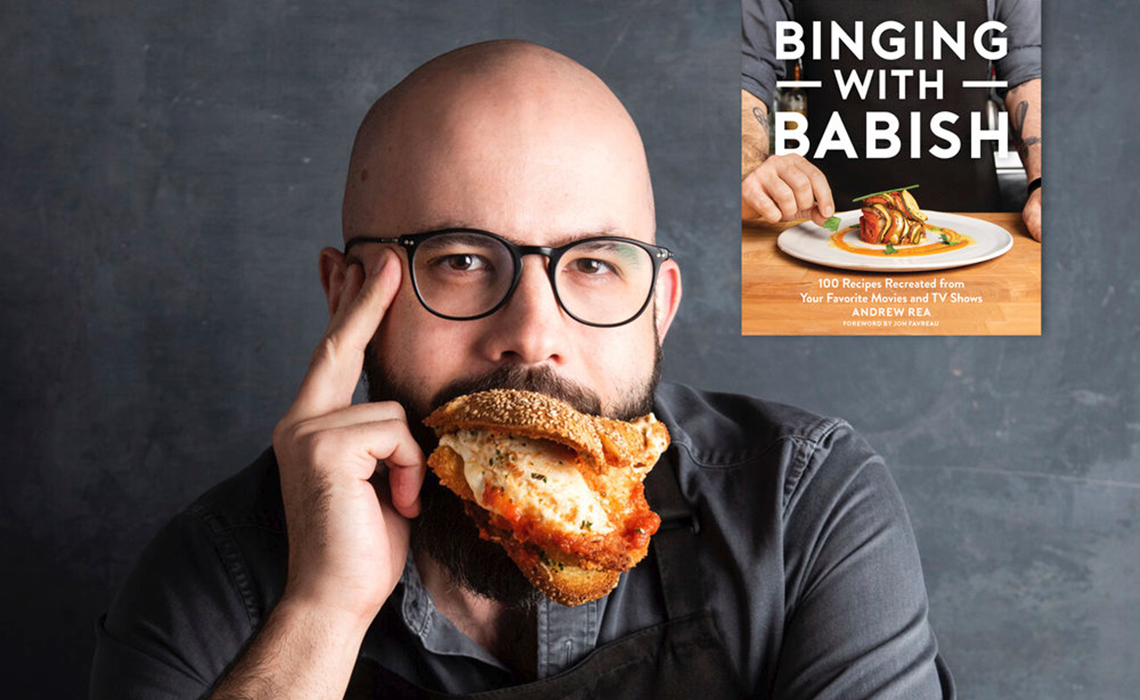 To say that Andrew Rea puts in the time as a YouTube creator would be an understatement.

Rea often puts in 60 to 70-hour workweeks making content for his channel Binging with Babish, where he expertly (and deliciously) recreates dishes from TV shows and movies, sharing his recipes so viewers can make perfect little bao inspired by Pixar’s short film of the same name, and Krabby Patties from SpongeBob SquarePants, and the turkey burger from Parks and Recreation. In between putting out two to three videos per week, he’s written two cookbooks — the newest of which, Binging with Babish: 100 Recipes Recreated from Your Favorite Movies and TV Shows, debuts tomorrow.

Managing his multifaceted creative career is a lot of work, he told FFWD, but it’s “my dream job.”

“It’s really enlivening to be part of something you can feel so proud of and be creatively fulfilled by,” he said. “It’s something that I’ve always dreamed of being able to do and something I never imagined I’d be able to.”

And Rea is well aware that the content that creatively fulfills him also satisfies many viewers. He serves up content to the tune of more than 50M views per month, and says some of his videos “get double, triple, sometimes five or 10 times the viewership of a major cable show. I won’t say what shows, but we’re talking TV dramas that cost a million or $2 million to produce. You can bet I’m not getting paid anywhere near what those networks are getting paid for having advertising on their content,” he told FFWD.

To that end, one of Rea’s plans for the future involves a venture he said is “an effort to empower YouTubers to better monetize their content.”

“The tide is changing,” he added. “There are plenty of advertisers out there that are doing big things with YouTube. It’s a very exciting time, and it is an underexplored territory. And we’re trying to charge forth into it as the authorities on how modern advertising should work.”

As for what else the foodie future holds, Rea is also already writing a third cookbook, Basics with Babish, chronicling the non-pop-culture-related recipes on his channel, which are meant to be tackled by inexperienced cooks. And he’s looking to establish a physical footprint in Brooklyn, where he hopes to open a brewpub that’ll double as a studio space for his channel and for his and his partner Sawyer Carter Jacobs’ production company BG Films.

“I want to reach as many ears and eyes as I possibly can in the world,” he said. “I want it to get to more and more people and encourage more and more people to cook or find ways to express themselves and be their fullest selves, because that’s what I’ve finally been able to do for myself. This is the person that I’ve always wanted to be and never thought that I would ever be.”

You can check out Rea’s new cookbook here, and see details about his book tour, which kicks off tonight in Brooklyn and will take Rea down the East Coast and over to the West Coast before swinging back to conclude Nov. 1 in Chicago, here.