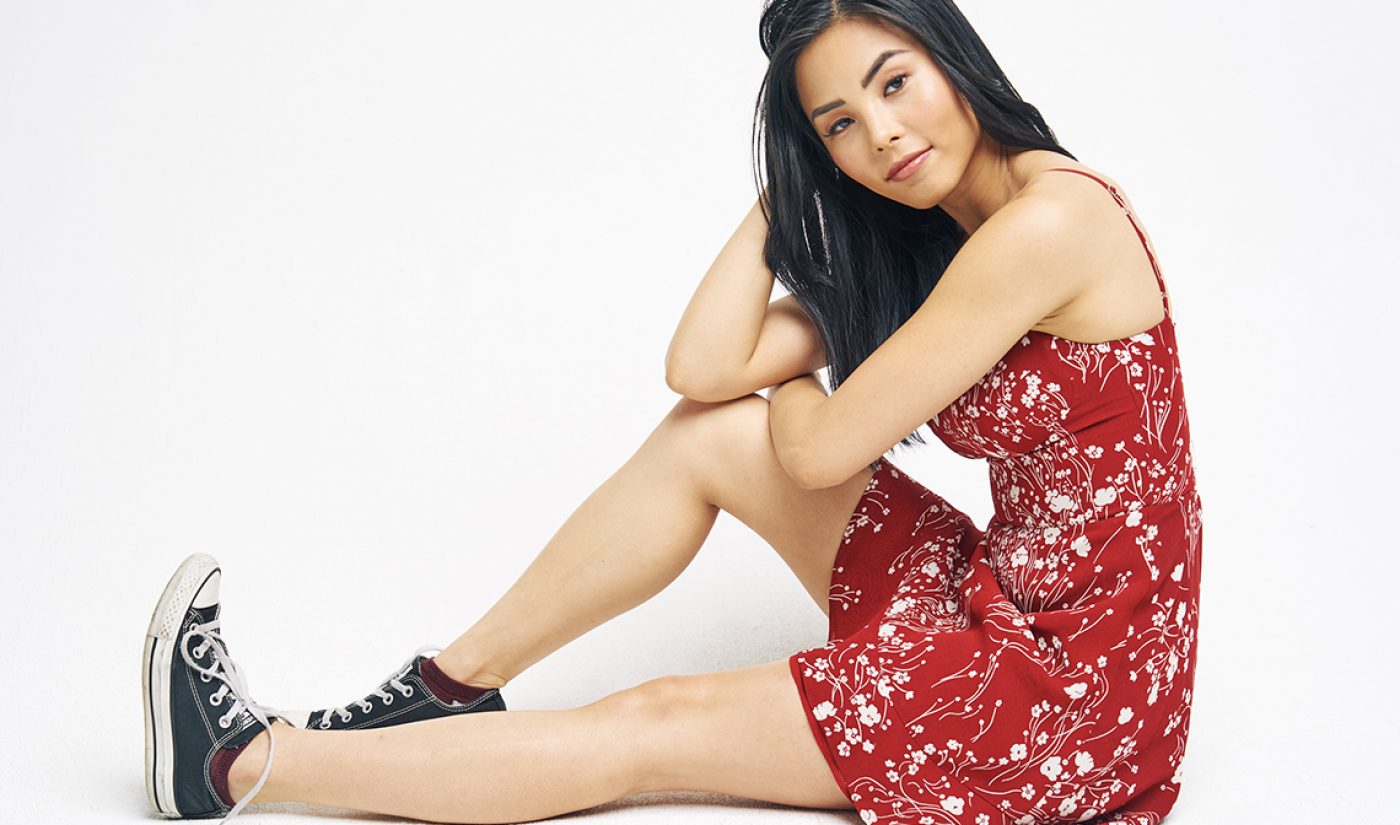 Anna Akana is a woman of many talents.

She’s an actress, set to star in the upcoming Netflix/Millarworld series Jupiter’s Legacy, as well as the adaptation of John Green, Lauren Myracle, and Maureen Johnson’s young adult holiday anthology Let it Snow. She’s an author, having published her first book So Much I Want to Tell You in 2017, and a screenwriter, having recently sold the pilot script for a series based on that book to upcoming streaming service HBO Max. She’s also a comedian, a filmmaker, and a YouTube creator.

And, as of last week, she’s a debut singer-songwriter who just released her first album, Casualty.

The 13-track album dropped Oct. 4, but Akana still has more in store for fans. She designed Casualty as a visual album, something that meshes her interest in directing and filmmaking with her fledgling music career. While all of Casualty’s tracks are available for listening, Akana is staggering the release of the album’s complementary music videos, and will premiere one every three weeks on her YouTube channel, where she has 2.61M subscribers and nets around 5M views per month.

Akana’s multifaceted journey as a creator began with her foray into the cutthroat world of stand-up comedy, which led her to YouTube. As someone with anxiety, Akana struggled to make it through the kind of gigs every new stand-up is subjected to: the kind booked at locales where people “aren’t there necessarily to watch jokes,” she explains. So, in 2011, Akana turned to YouTube instead, where she could cultivate an audience of people who actually want to listen.

Since then, Akana has shifted her channel into a home for her short films, as well as a lifestyle outlet where she (with her signature humor) gives advice and addresses topics like how she came out as bisexual (hint: it was at the Streamys), her top four lessons from therapy, coping with anxiety, why self-love is vital, and how she’s so dang prolific.

Now, with the release of Casualty, her channel is also the home for her music videos. She’s already uploaded several installments of the visual album, two of which you can see below.

As for where she and her creative endeavors are heading, in between her many film engagements, Akana has returned to performing in front of people. But this time, she’s not doing stand-up on grimy side stages or in the corners of laundromats. This time, she’s headlining a winter show at New York’s Mercury Lounge, where she’ll perform songs from Casualty.

You can check out info about the event here, and check out our chat with Akana below.

Tubefilter: Let’s jump right in! You’re known for many creative pursuits–you’re a comedian, an author, and an actress, to name a few–but the one we’re focusing on is your expansion into music with your debut album Casualty. Tell us a little about your path to music, and about what went into putting this album together.

Anna Akana: Music has always been in my life, but usually in comedic form: I used to write and perform comedy songs in my stand-up set, was part of a comedy band, and fell in love with musical improv. As I’ve gotten older, I’ve been able to look back and see that my roots in comedy have always been about escape. I fell in love with stand-up after seeing Margaret Cho perform and having my pain surrounding a death in the family be temporarily alleviated. And as beautiful and special as comedy is, the older I get, the less I want to escape. Music has always been a place where the artform sits with your feelings and lets you indulge in it, face it, and ultimately process. So it feels like a natural transition.

The album is a 13-track visual album. The writing and recording processes were fairly quick, but it’s taken me almost a year to complete all the music videos.

AA: I got into YouTube because I grew frustrated with the stand-up scene. When you start performing, you’re usually in coffee shops, laundromats, places where people aren’t there necessarily to watch jokes. I loved the idea that people who want to see me would voluntarily click on my videos.

Tubefilter: How has being on YouTube helped grow your creative careers?

AA: It’s given me so much leverage in ways that I am grateful for: an audience, a built-in marketing house I can leverage as an actor, a playground to write and produce and direct.

Tubefilter: Back to Casualty! What were your inspirations behind some of the songs, or behind the album as a whole?

AA: The album as a whole was inspired by heartbreak (aren’t they all?). I was in the worst depressive episode of my mental health in 2017, and then was broken up with right before Christmas. There was no work to do, I had fought with my family, and essentially spent that Christmas completely alone when I thought I was going to be overseas with my partner and his family. It was awful, but I started writing songs to pass the time.

Tubefilter: As we mentioned, you have a wide range of pursuits, including numerous roles in films and TV series. How do you time-manage? How does YouTube fit into your daily schedule?

AA: I’m pretty diligent about time management. I block-shoot YouTube videos now, so that aspect of my creative life only takes up about two weekends per month (excluding writing time and post quality control). I also am a great procrastinator — when I get stuck on one project, I just hop onto a different one until inspiration brings me back to the first.

AA: Honestly, it was such a long and slow process that there was no defining moment. I still don’t feel like a “professional” creator.

Tubefilter: The release of Casualty is exciting, but you also have other projects in the pipeline, such as Let it Snow. We’re not asking you to spoil, of course, but can you tell us a little about the film and your role?

AA: I play Kerry, a very confused and scared teenage girl who is in denial about her sexuality. The film itself is an ensemble piece that follows the lives of various teenagers in a small town as the worst blizzard in history hits. It’s quite a beautiful book and adapted script, I’m so excited for people to see it.

Tubefilter: What makes you love creating content on YouTube, especially when you have so many other projects to tackle?

AA: YouTube is complete creative freedom. As much as I love being an actor on set with just one job to do, being a creator allows me to make anything I want. It gives me the freedom to express my voice on important causes. It’s also a great way to talk directly to people and relay the therapy advice I’ve gotten over the last decade.

Tubefilter: How long does it take you, on average, to put together a video, from scripting to filming to uploading? How do you come up with ideas for videos?

AA: Typically, I can script something out within half an hour. Filming will take about three to five hours. I don’t edit anymore (woohoo!) but the quality control process is over a few days.

I come up with ideas for videos at the absolute last moment. I’ve unfortunately trained my brain not to give me anything until necessary, so I typically script things out as the crew sets up the to-camera shot.

Tubefilter: You mentioned you don’t have to do editing anymore. Tell us a little about your editor and the rest of the team behind the YouTube scene!

AA: For YouTube videos, my crew is composed of five people.

I have two managers, one for traditional media and one for music, a team at CAA who cover lit, digital, film, voiceover, etc., a booking agent at Paradigm for music, Shore Fire Media as my PR, a lawyer, and an assistant.

AA: I think the reason I’m an artist is because I am able to transform pain and tragedy into art that makes people feel seen and less alone. Some of the most valuable feedback I get is from people who are suffering from mental illness and have come across my videos. The ability to use whatever depression or anxiety I’m going through to help others is probably the most powerful purpose I have.

AA: I sold a pilot script to HBO Max called So Much. It is based on my memoir, and I’m adapting it into a half-hour comedy about death. Diablo Cody is our showrunner (fangirling), and I’m so excited about potentially getting to make it into a show.

I’m also gearing up to perform a headline show in New York at the Mercury Lounge on Dec. 6, and figure out potential touring in 2020.

On top of that, I’ll be going to Toronto next month to film my recurring role in Jupiter’s Legacy, which is an amazing graphic novel by Mark Millar. I get to play an assassin with telekinetic powers, so what more could a girl want?

For the YouTube channel, I’ll be releasing a music video every three weeks once Casualty drops. I’m excited to keep creating my regularly programmed content on top of diving into more short films, music videos, animated poetry, and whatever strikes my fancy.