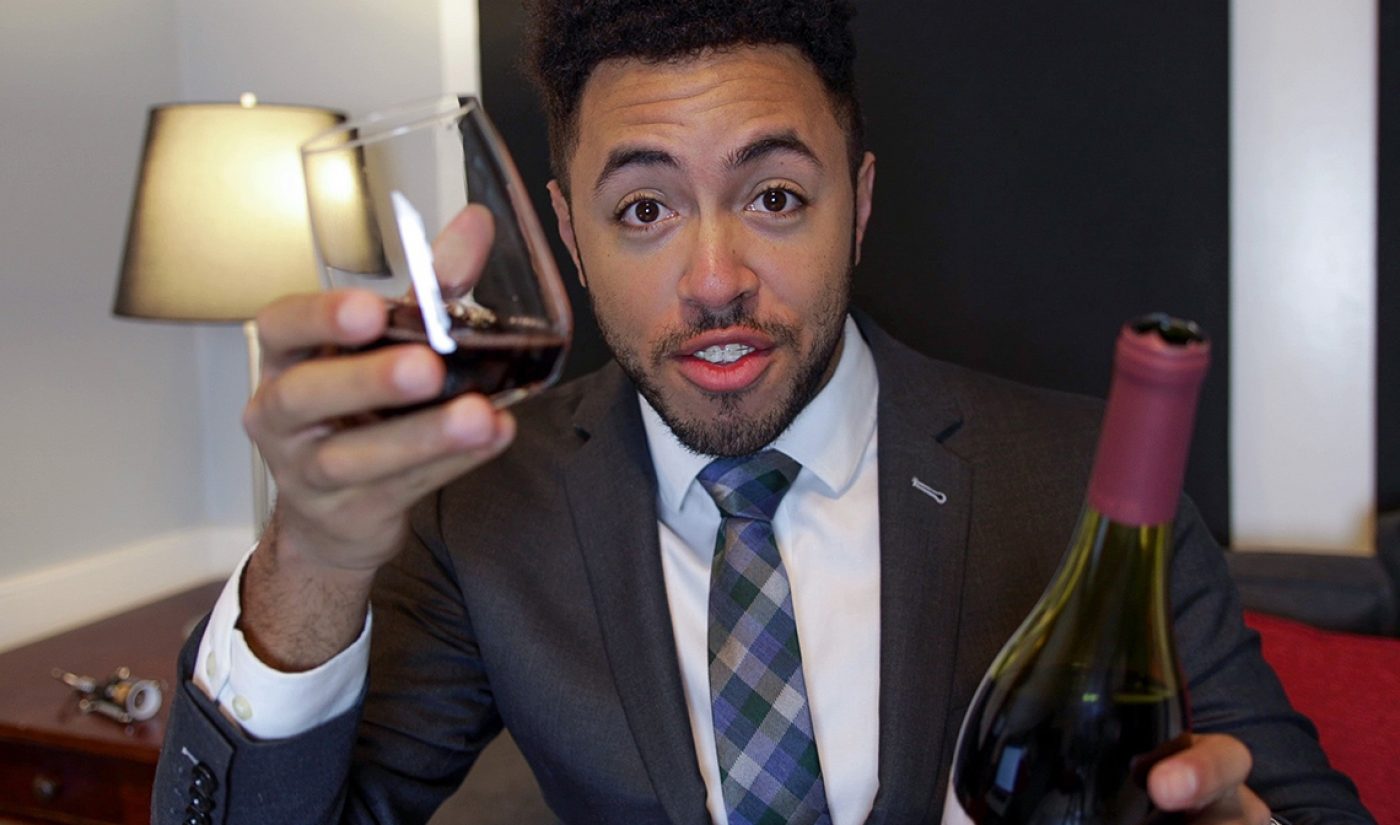 It’s his channel’s slogan, and it’s a theme that’s evident when Johnson talks about his creation process. He’s a relentless perfectionist, which means that every one of his 10- to 30-minute YouTube videos takes a solid 30 to 40 hours of work behind the scenes. Those hours of hard work involve Johnson ensuring everything, from filming to editing cuts to thumbnails and video descriptions, meets the high standards he holds himself to.

Producing content is now Johnson’s full-time career, but there have been times when his perfectionism and anxiety have stymied his creative energy enough to push him away from the work he loves. Way, way back when he launched his channel in 2006, he was a 14-year-old gamer inspired to share his passions (namely gaming and pop culture) with the world, thanks to top YouTubers of the day, like John and Hank Green. But when his videos unexpectedly gathered steam and began drawing a real audience, he found himself struggling — and worrying. What if he uploaded something that didn’t go viral? What if he uploaded something no one liked at all?

“I then came up with a brilliant solution to that problem,” he says. “Which was to completely stop posting altogether.”

Despite hitting pause on uploading, Johnson never stopped wanting to go back to making videos. So, in 2017, he returned to his long-dormant YouTube channel and revamped it. Two years later, he’s just crossed the one million subscriber mark, and while he still struggles to balance his need to create with his need to create perfectly (not an uncommon challenge in the creator community), passing this milestone has encouraged him to focus on his future goals — including creating more content quantity without sacrificing content quality.

Jarvis Johnson: Well first off, to my subscribers, I just have to say thank you for everything. I’m so so grateful for all of the support I’ve received over the past year. I’m extremely fortunate to have a platform at all — and, even more so, an opportunity to follow my childhood dream of getting demonetized for a living.

As for how it feels: weird. To be completely honest, it feels mostly the same as when I hit 1,000 subscribers, but with slightly higher stakes. I know a lot of people say that, but it’s true. Thanks, hedonic treadmill!

JJ: Well, I was born in the fine print of YouTube’s privacy policy and, over the years, I slowly migrated my way onto the recommended page. Sorry about that.

Okay, ENOUGH JOKES! I’m originally from Gainesville, Fla. (Go Gators!), went to college in Atlanta, where I studied computer science (Go Jackets!), and eventually I settled in San Francisco (which famously has no sports teams).

JJ: I grew up on YouTube, so I never even considered another option. I’ve basically been addicted to it since I was in middle school, when I finally learned that the “YouTube” everyone was talking about was (surprisingly) not a fansite for the band U2.

I immediately fell in love with creators like the Vlogbrothers, who were instrumental in forming my worldview as a teenager and still hugely influential to me as I navigate adulthood and my new role as an “internet person.”

Jumping back to goofs, the YouTube funny people of yore like Bo Burnham, Derrick Comedy, and The Lonely Island became my entire sense of humor.

I made my YouTube account, the very same one I use today, when I was 14, as a way to upload videos of me playing Runescape and dancing to High School Musical.

Fortunately or unfortunately, some of my videos started gaining traction, which made me anxious about posting something if it wasn’t going to go viral. I then came up with a brilliant solution to that problem, which was to completely stop posting altogether.

Nearly 10 years later, in 2017, after working as a software engineer for a few years, I went to my first VidCon. I was really inspired by the other creators I saw there, so much so that I decided to dust off the ol’ 37-subscriber YouTube channel and get to work.

A few weeks after VidCon, I bought a camera, and I uploaded my first video in almost a decade about (you guessed it) my fear of not living up to other people’s expectations of me. How poetic.

The rest is, as they say, very recent history.

JJ: I’m gonna be real with ya, chief. I definitely had to double-check the definition of sardonic.

But yes, absolutely! My YouTube master plan is mostly about making sense of the world through strange internet content while desperately searching for my creative voice.

In terms of content strategy, I do and I don’t have one. My content has changed a lot in my short time on the platform, and I expect it to continue changing in the future, so it’s hard for me to think of my content in any long-term context. Instead, my strategies are more short-term: “Given what I know about the state of my world today, what do I want to make for the next few weeks/months? What are my goals for that content? What does it aim to achieve?”

I have to leave a lot of room for flexibility because, if I feel too restricted, it’s hard for me to enjoy what I’m making. I try to check in regularly with myself and my needs. If I don’t, it’s a fast track to Unhappy Town.

JJ: My inner critic wants to disagree with the premise of this question, but I’ll bite.

I’ve always spent most of my time online, so I try to pay attention to trends/the cultural zeitgeist and do my best to respond with observations that are interesting to me and hopefully appealing to an audience. Then I filter that through my dad joke persona.

I also just obsess over metrics and fiddle with titles and thumbnails until they work. As silly as it sounds, coming up with compelling packaging for a video can be a real challenge creatively, but I think it’s worth giving a video that I put a lot of work into its best chance at success. At least that’s what I tell myself.

And luck. Lots of that.

Tubefilter: How do you come up with video ideas and keep your audience coming back for more?

JJ: How do I come up with ideas? Well, I write down every idea I have, even if it’s bad (like it often is), and then I search for the needle in the haystack.

How do I keep my audience coming back? You’d have to ask them, lol, but I think and hope I come off as a real person. YouTube is full of the performative, idealized self, and while it’s impossible not to engage in that, I try to call it out, at the very least.

Also, I just have to hope that what’s interesting to me connects with people — or, if I want to follow a trend, that I can find something interesting enough about that trend to talk about it. I can’t spend the time it takes to make a video on something I don’t find interesting in some way. My brain just doesn’t work like that. Maybe I just don’t have willpower?

JJ: Oh yikes. I spend too long on my videos. Not only am I a perfectionist, but I also have ADHD and anxiety, and currently do everything myself. So, for a video on my main channel, it takes at least 30 to 40 hours from top to bottom. Honestly wouldn’t be surprised if it’s longer than that, though. It’s telling that I quit my job to do YouTube and could still only put out two videos a month. I’m working on that, though.

JJ: The first videos that popped on my channel were about my former career as a software engineer. Despite that not being what I initially wanted to do with the channel, I was just excited to be getting views. So I alternated tech videos with other experiments as I searched for a foothold that was independent of tech. I really liked the commentary genre, so I tried a few times to make that happen, and luckily for me, a video eventually took — albeit six months after publishing it.

My most popular video (about 5-Minute Crafts), which is sitting at 8M views as of writing this, sat dormant with 15k views for six months until one day the algorithm decided it was time for it to get 2 million views in a weekend. Maybe it’s because I had recently changed the title of the video, maybe it’s Maybelline.

I learned a lot of lessons from that video, but the one I’ll mention here is to not beat yourself up over the numbers, because tomorrow a “failed” video could be a success. Just make stuff you like and keep doing that.

As that video took off, I built a content strategy around the incoming audience, and was able to capture that momentum and turn it into some healthy growth, I think.

Just kidding. I like drinking coffee, doing karaoke, and playing tennis with my friend Andy.

JJ: The community aspect of it all. That’s a really special thing about YouTube. There’s nothing quite like uploading a video, going into the comments, and scrolling through a series of messages that just say “second.”

Real talk, It just feels awesome to be able to create content on the platform that I already spend so much time on as a fan. I’m just a big ol’ fanboy that found a legitimate way to get backstage at VidCon.

JJ: Yikes. Did my manager put you up to this?

It’s a good question for sure. I was actually pretty nervous about this milestone, which is why I took a break at 975K subs. That way, I could slow my roll to 1M while I did some soul-searching.

It’s been about a month since I posted a video, and I’m excited to get back at it. First, I want to figure out how to post more regularly, and then I’m gonna make some more of the same stuff as usual, mixed in with some experiments here and there, and just take things as they go! I’m also planning to bring back my podcast and make some more stuff with friends. It’s gonna be a fun time.

You can add yourself to the ranks of Johnson’s more-than-a-million YouTube subscribers at their channel YouTube.com/JarvisJohnson.