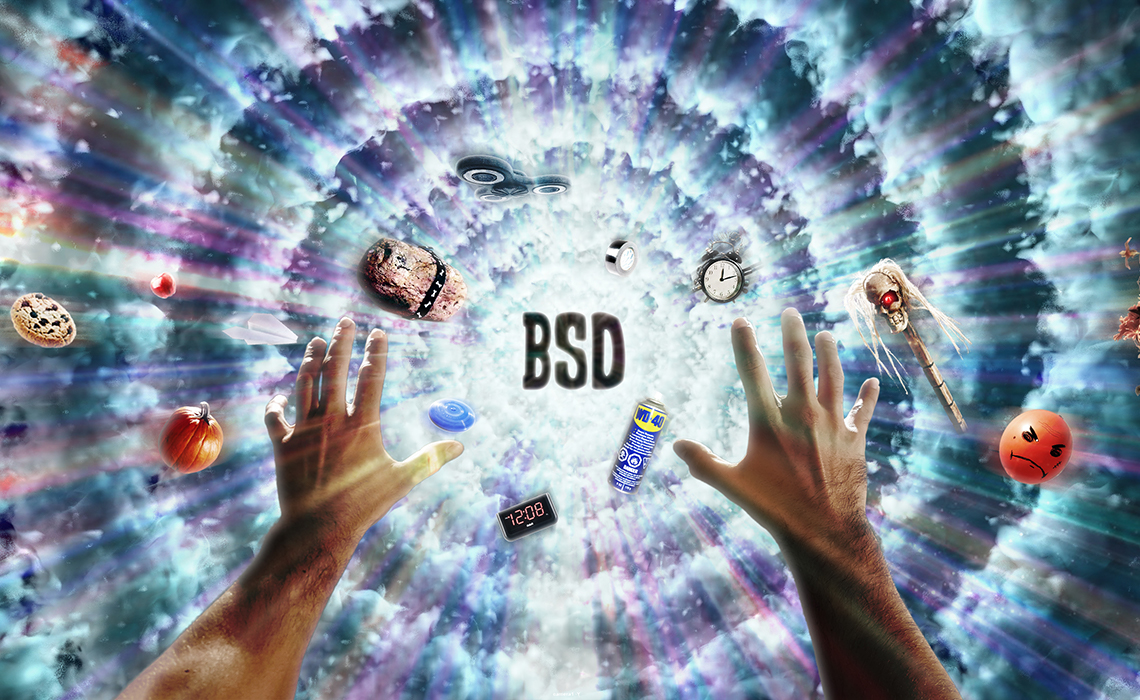 You ever have one of those days where everything you do, no matter how simple, just goes wrong?

If your answer is “yes,” then the nameless, faceless main character of Buttered Side Down’s content gets you. I mean, he really, really gets you. Because for him, it’s not only one day that ends in disaster — it’s his entire life.

Buttered Side Down is the united moniker for a pair of Los Angeles-based visual effects artists who came together two years ago to produce one-of-a-kind videos, all of which are: funny, filmed with a head-mounted GoPro, feature some of the duo’s VFX skills, and star the same impulsive, bad luck-prone main character.

The character, played by the duo, never speaks, and his face is never shown. Instead, viewers watch the action from his point of view, and hang on for the ride as things go from sort of okay to bad to worse to…a lot worse. Like that time he was charmed by little snapping firecrackers, tried to build his own firework, and blew up the sun. Or that time he bought a cute backyard pool and some swimmies, expecting a relaxing dip, only to dive in and realize he’s stranded in the middle of the ocean. Or that time he tried to learn a new hobby, only to have his freshly-made clay friends rebel against him and steal away into the night (a particularly impressive video, as it’s made in stop-motion and required a staggering amount of still photos and time invested).

As you may have guessed, Buttered Side Down recently crossed the one million subscriber mark, something they attribute to their ever-growing, dedicated fandom. And while the two don’t plan to stop making their signature short videos anytime soon, they’re also looking at giving fans even more of what they want by investing in longer-form content. The duo have a Patreon to fund their productions, and right now, their current goal is to bring in $5K per month in subscriptions to support the cost of making a full-fledged movie.

Check out our chat with this disaster master duo below.

Buttered Side Down: Hitting one million subscribers has been a long goal of this channel ever since it began. We never thought we’d reach this goal so soon, and want to thank our fans for watching our videos, supporting us, and spreading the word!

BSD: We’re both visual effects artists living in Los Angeles. We got our start working on movies, commercials, and TV shows. We met at an effects company and discovered a similar passion for storytelling. We collaborated for several years on short films before developing our YouTube channel concept.

BSD: We’ve always aspired to be filmmakers, and together we’ve experimented with many different means to that end, whether it’s live-action, 3D animation, or virtual reality. But finding an audience and proving our skills as filmmakers was always a challenge. That’s why we turned to YouTube. It gave us the platform and potential for growth unlike any other outlet we’ve tried.

Tubefilter: Your content is very unique. Can you talk a little about what goes on behind the scenes? What do you film with? How did you come up with this “entertainment of the future” video style?

BSD: We grew up on a healthy dose of ’90s and early 2000s cartoons and cinema, which were big influences for us. We’re both big fans of Mr. Bean, which a lot of people relate our channel to. After several of our endeavors into filmmaking failed, we looked toward other means to get our creative voice heard. When one of us approached the other with a rough concept for a YouTube channel, we both explored what that concept could be, and we eventually boiled it down to a formula that excited us both and was accomplishable with minimal production requirements.

We went down to the local Best Buy, bought a GoPro HERO5 Session and headstrap, went home, and filmed and edited our first episode in one night. It made us both laugh, so we set out to create six episodes, and planned to release the first one once we had a six-episode buffer. We worked during the day at our VFX jobs and at night on the channel, sometimes not even sleeping. Eventually, our buffer caught up to us, and we had to abandon our once-a-week schedule, but we kept at it and today have produced 40 episodes in about two years.

As our channel evolved, we became more ambitious and comfortable with creating more complex effects, so the episodes have become more challenging to produce. We’re always striving to find that perfect balance between complexity and simple humor.

Tubefilter: Are you willing to dish on a little bit of the magic that makes your content work? I’m thinking of a shot from one of your recent videos, where you shake a painting and all the fruit falls out. How did that sequence work behind the scenes?

BSD: When writing an episode, we’re always looking for ways to bend reality in a comical way. We won’t settle on an idea unless we’re both laughing at it, so many ideas end up getting thrown out. Very rarely does a final video come from the first idea — sometimes it’s the tenth.

In the case of the fruit painting, we had established that the picture of an open window could have an effect on reality by letting the fly in through it, so we wanted to further extend that concept and flip it so reality would have an effect on a picture. We took a painting of fruit in a bowl and created a version without the fruit. Then, when the character shook the painting, one us was just offscreen dumping a bowl of identical fruit into the shot. When the painting was returned, we simply swapped the two pictures, and voilà!

BSD: That’s a good question. The response to our videos has been bigger than we could have ever imagined. We try to make our content accessible to as many people as possible. That means writing jokes that make us laugh, but are also appropriate for all ages and don’t rely on dialogue, which can be divisive. We center our video topics around everyday things and then try to take them in unpredictable directions. Our viewers should know to expect the unexpected, but also to depend on a relatable, sympathetic, and consistent character throughout all the madness.

BSD: Our strategy has always been heavy focus on story and character, with emphasis on quality over quantity. We talk ideas every day of the week, and are both willing to abandon an idea if either of us thinks it won’t work. We typically start with a broad topic like gaining superpowers or swatting a fly and then bounce ideas off each other until we strike gold.

BSD: Typically, it takes us around two weeks, but sometimes our ambition gets the better of us and it can take up to a month to complete. Some ideas are more challenging than others, but we always try to come up with the funniest, least complex idea possible. Our “Learning to Draw” video is one of our least complex yet funniest episodes, for instance.

BSD: It wasn’t an overnight success, which I’m sure many other YouTubers can relate to. We expected it to take a long time to build an audience. That said, we started seeing significant growth with our third episode, “Learning to Swim,” when a GIF we made from the episode hit front page of Reddit. Initially, we would always make GIFs from our episodes and post them to Reddit to draw attention to ourselves. After a while, our audience started doing that for us, and from there, the channel grew organically.

BSD: We love watching movies and playing video games and browsing YouTube. We stay fit by going to the gym three times a week, and often will talk ideas while hitting the weights. You may have noticed how buff the main character is.

BSD: Definitely the quick turnaround and freedom and control we have. With just the two of us, we can come up with an idea, film it, edit it, and get it out the door in a few weeks, and move on to the next fun project.

BSD: We’re going to keep doing what works, but we’re also discussing ways to diversify our content. One of those ways would be to experiment with longer-form videos. Our episodes are typically short, fast-paced, and methodically thought out, but we think there’s value in improv and spontaneity, and we could see content where we travel to interesting locations and come up with mind-bending scenarios on the spot being included in our output.

You can add yourself to the ranks of Buttered Side Down’s more-than-a-million YouTube subscribers at their channel YouTube.com/ButteredSideDown.