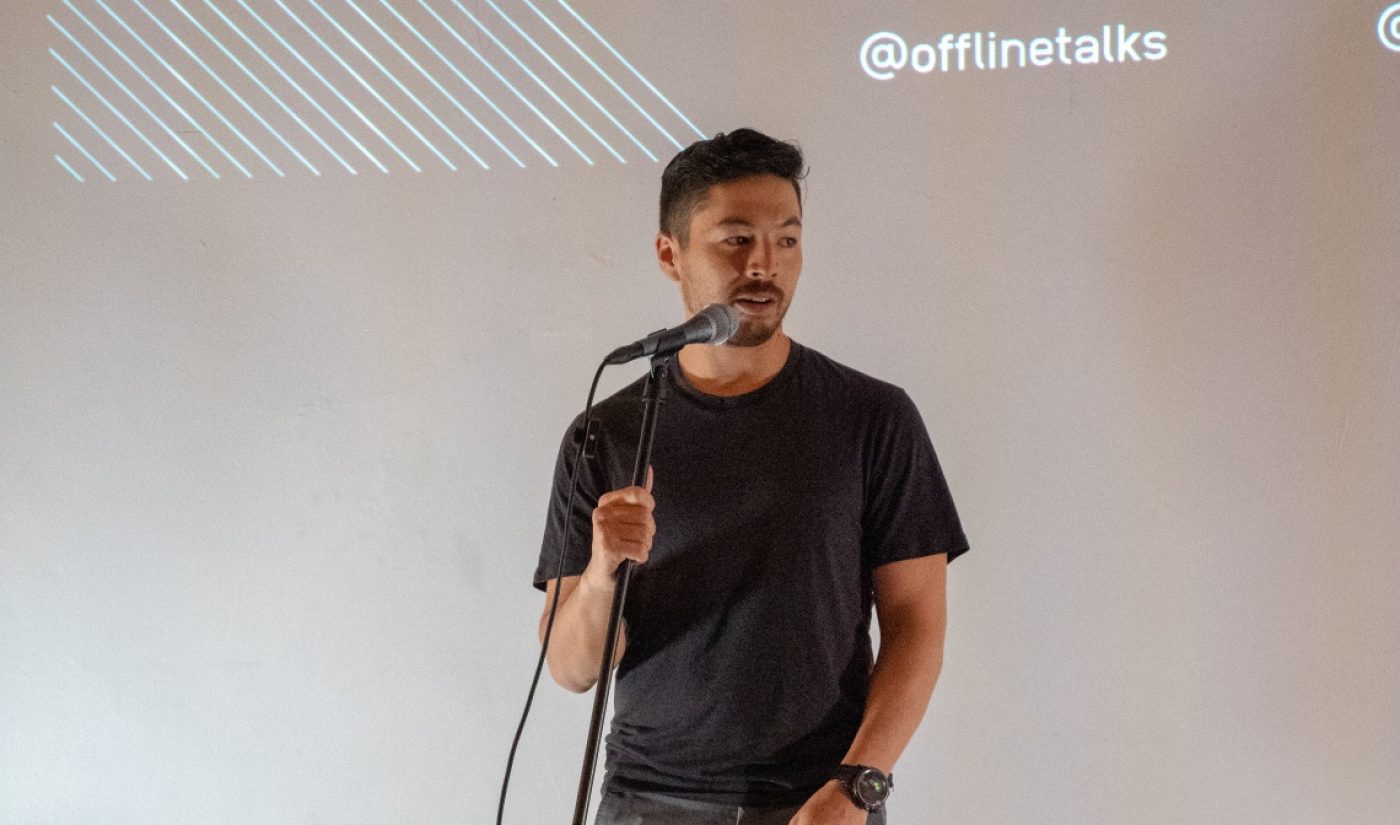 On Thursday, July 11, many online video creators, fans, and executives turned their attention to VidCon, where some of the industry’s biggest names connected with their peers and viewers. That day, YouTube product boss Neal Mohan delivered a detailed pitch that outlined many of the platform’s incoming innovations. Afterward, some of the world’s top social media standouts, including pop star Meghan Trainor, Good Mythical Morning duo Rhett & Link, and talented American Sofie Dossi converged on the Anaheim Convention Center to perform at the annual YouTube Onstage event.

Meanwhile, 2,800 miles away from Anaheim, in an airy studio space in Lower Manhattan, a very different kind of event offered its own brand of creator-facing advice.

That same Thursday, Casey Neistat’s 368 and the nascent organization Creators Offline co-produced a so-called “micro-conference,” headlined by a cadre of creators who are either brand new to the influencer game and/or hustling to attract more attention from viewers and advertisers. While much of the advice doled out at the 368 event mirrored what was said throughout the three days of VidCon’s creator track, the event was informed by its own distinct mission.

“This most recent collab with Creators Offline reflects 368’s mission to help internet creators by building an empowered community,” said Paul Leys, Neistat’s co-founder in 368. “We set out to find new ways to connect these creative like-minded people, bringing them together around things just like this — for creators and by creators.”

Specifically, Creators Offline and 368 hoped that by constructing an event with a casual vibe and no monetary barriers for its attendees, they might create a valuable networking opportunity for creators who are still figuring out how to build their own online communities.

Yes we know the 368 Creator Offline event is at the same time as VidCon but this is for small creators. We’re passing the mic to creators who need their metro card balance much more so than a $$$ flight + rental car to Anaheim. Admission for tonight’s event is exactly 0 dollars

The meetup was the third event Creators Offline has put together since its launch in January. Two of the three micro-conferences have taken place at the year-old 368 space, which Neistat launched after splitting from the CNN-backed Beme venture, while the other brought together small creators in the Orange County area. The co-founder of Creators Offline, vlogger and web developer Genki Hagata, explained that these small-scale conferences can serve a community that might be priced out of big-name gatherings like VidCon and VidSummit.

“A big conference like that has such a high barrier for entry,” Hagata told Tubefilter, citing the prices of flights, hotel rooms, and event passes.

Meanwhile, the 368 Creators Offline’s, which Hagata described as one-half meetup and one-half conference talk, was completely free. Attendees were only asked to register ahead of time, so that the evening might feel more intimate than hectic. It’s “more like you’re eating dinner with friends than you’re at this busy conference,” Hagata explained.

The result was a get-together that was well-attended but not overfull. Creators, ad executives, and other assorted tech professionals mingled inside 368’s lofty industrial space, sampling pizza from several venerated NYC establishments before sitting across wooden benches and long couches to hear from a diverse group of presenters. Some, such as LGBTQ+ activist Jackson Bird (who has 68,000 YouTube subscribers) and chef Stephen Cusato of the Not Another Cooking Show channel (88,000 subscribers), have already amassed millions of views on YouTube, while others, like filmmaker Terry Warfield (20,800 Instagram followers) and animator Lea “LeaMotion” Sabban (17,000 followers), have attracted followers and brand partnerships across the social web.

“When we bring the creator community together at 368, we give them the mic and the stage, or whatever else they might need, our goal is to build the pipelines and the infrastructure to help creators grow,” noted Leys. “This was the first time Terry had ever given a formal talk, it was a big accomplishment for him and sharing his story was something everyone else related to.”

No matter where any of the particular speakers plied their respective trades, they shared a bootstrapping attitude that encouraged smaller creators to will themselves to try new things — and, perhaps, fail at them — rather than getting frustrated and giving up. Cusato, who spoke openly about the personal and professional struggles that led him to his current operation, noted that his past disappointments have been important to his development as a creator. “That’s just the cycle of life,” he said during his talk, “is figuring out more problems to solve.”

The host of Not Another Cooking Show connected with Hagata at Creator Offline’s first 368 event back in January, less than a year into his YouTube career. He described the get-togethers as icebreakers for people who have “never really connected outside of their studios.” As he told Tubefilter, “There’s an energy when a room full of these people get together.” The resulting exchange of ideas, he explained, creates a “constant cycle of being inspired.”

“For people who think small creators can’t get in, it’s not true,” Cusato said. “It’s not this lock-and-chain type of thing.”

The value of uniqueness

Though the primary goal of these micro-conferences is to create a community of like-minded creators, they also offer their speakers the opportunity to hone important career skills. Warfield, for example, connected with Hagata through Twitter after his fans encouraged him to give public speaking a try. While his current following may not be large enough to book him a spot on a VidCon panel, it is just right for a Creators Offline event, where the words of a hard-working up-and-comer can resonate with an equally audacious audience. “We want to give people opportunities to get into public speaking who might not be able to book themselves,” Hagata told Tubefilter.

Warfield chronicled his first-ever public speaking gig in a vlog he shared on his YouTube channel, and before he took the stage, he interviewed some of the other creators in attendance. Through those discussions, Warfield’s vlog paints a picture of a band of online video outsiders: People who might prefer to attend an event like Creators Offline not just because it is easier on the wallet, but also because it celebrates the work of outsiders who may not always fit into typical social media molds.

Cody Wanner, who spoke at the January edition of the micro-conference, put this idea into words. “I think the biggest obstacle to finding [my identity] is accepting that I’m weird,” he said during a discussion with Warfield, “and valuing that as an asset, valuing uniqueness, valuing the parts of me that don’t fit into the cultural norm.”

Cultivating a community for the creative underclass is a noble goal, but it doesn’t come without significant challenges.

A founding principle of 368 is that they will never take a fee from creators or charge creators for anything. The team at 368 is finding new ways to work with brands (like its recent partnerships with Adobe), connecting them with creators and investing brand dollars in the creator community by underwriting experiences designed purely for the benefit of creators. “It’s all connected to 368’s mission. What we do as a business is intrinsically linked to our ambition to build community,” says Leys.

Hagata still works full-time as a web developer and organizes Creators Offline events on the side. His own YouTube channel is still relatively small, though he did complete a year-long daily vlogging project at significant personal expense. In order to share his 365 videos, he shot 11 terabytes of video and accrued operating costs close to $5,000.

Because Hagata understands the high cost of content creation, it is part of his mission to make sure attendees can get into Creators Offline events for free. In order to maintain the “intimate, passionate space” he envisions, tickets are doled out on a first-come, first-served basis. This vision meshes well with that of 368, while also aims to serve creators who might not be able to otherwise afford a spot at the table. As 368 noted on Instagram in the lead-up to the Creators Offline event, the no-cost approach brings can lend a hand to videomakers who you might not see on the floor at VidCon. “We’re passing the mic to creators who need their metro card balance much more so than a $$$ flight + rental car to Anaheim,” reads the post. “Admission for tonight’s event is exactly 0 dollars.”

But while this promise solves one issue, it creates another. To bring Creators Offline events to other cities, Hagata will need to find suitable venues within his price range. He noted his struggles to launch an event in Austin around the time of SXSW, when prices throughout the Texas capital skyrocket due to high demand. Ultimately, that event had to be postponed. “It’s very hard to find a venue that doesn’t cost too much money,” Hagata told Tubefilter.

To help support future gatherings, Hagata has launched a Patreon page as well as a Discord server. Through these avenues, as well as more traditional ones such as Twitter, the Creators Offline co-founder is figuring out which cities are most clamoring for a micro-conference of their own. He mentioned Austin, Montreal, Toronto, Seattle, and his home turf, the Bay Area, as urban centers where he plans to expand his event series.

Launching all of these micro-conferences won’t be easy, especially without the same amount of institutional support that gatherings like VidCon can count on. But Hagata and his cohort will strive to get the work done, because they are unafraid to fail. It’s an attitude Warfield summed up in his Creators Offline talk: “Just because you came 50 years and you don’t know your identity, and you don’t know your purpose, doesn’t mean that in year 51 you won’t figure it out.”