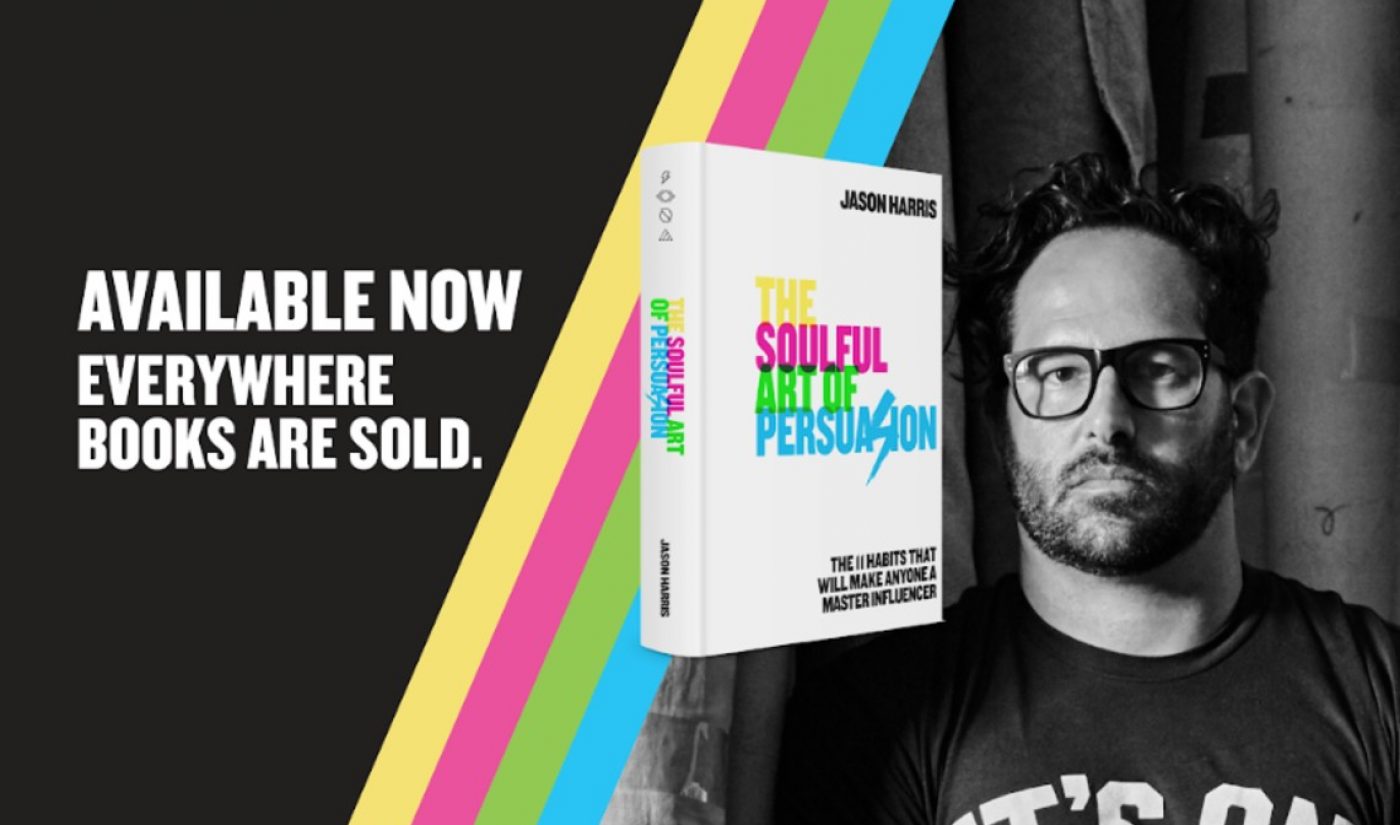 Digital advertising executive Jason Harris, who is the co-founder and CEO of the ad agency Mekanism, has written a self-help book in a bid to help readers become “master influencers” in their own right.

Titled The Soulful Art of Persuasion and published by Currency — an imprint of Penguin Random House — the book serves to help readers cultivate 11 character-building habits that Harris believes are essential to personal growth and success in business. The book’s thesis is that persuasion isn’t about logic or facts, but boils down to personal character. This argument is based on Harris’ own experiences in and out of the boardroom, and also draws on the latest research about trust, influence, and habit formation.

In addition to Mekanism, Harris is also the co-founder of the Creative Alliance, a coalition of ad companies that provide volunteer services to Civic Nation, a left-leaning nonprofit. Throughout his career, Harris has worked with iconic brands such as Peloton, Ben & Jerry’s, MillerCoors, HBO, and the United Nations. For instance, Mekanism — which was founded in 2000 — was the force behind HBO’s ‘It’s What Connects Us‘ campaign, Peloton’s holiday campaign dubbed ‘More To Give‘, and several spots for Alaska Airlines.

You can check out an excerpt of The Soulful Art Of Persuasion, which hits shelves today, below:

Asking someone to do you a favor is a remarkably effective way of getting them on your team. I know, it seems counterintuitive. After all, when someone does you a solid — driving you to the airport or saving you a seat at a meeting — most of us feel like we’re in that person’s debt. We owe them one, not the other way around. This is certainly true. But there’s more going on in these situations than we usually acknowledge.

When someone has done you a favor, they’ve entered into a collaboration with you. For just a moment, they’ve played a part in advancing some project of yours. And in many situations, this brief instance of involvement actually leads them to like you more than they otherwise would have.

Once you look for it, you’ll notice this principle playing out all over the place. You might be working on a laptop at a local coffee shop and ask the stranger next to you to watch your computer while you run to the bathroom. When you get back, I’d bet that person will be far more willing to shoot the sh-t with you than before they did you the favor. Same is true of a new neighbor who helps you up the stairs with your stroller at the end of a long day.

This surprising dynamic was illustrated by Benjamin Franklin. In his autobiography, Franklin tells the story of being chosen as the clerk to the Pennsylvania General Assembly while in his early thirties. He landed the gig without any problem. The next year, when he was up for the position again, an antagonistic state lawmaker made an impassioned speech in which he argued for replacing Franklin. Ultimately, Franklin kept his job, but he wasn’t crazy about having this unnamed legislator as an enemy.

Franklin, of course, was from a working-class family and hadn’t even finished high school. This new rival, on the other hand, was both wealthy and formally educated. And since it was a safe bet that the man would hold a lot of sway in the state government one day soon, Franklin was determined to get on his good side. He decided against “gaining his favor by paying any servile respect to him.” Instead, he flipped it and asked him for a favor.

As Franklin tells it: “Having heard that he had in his library a certain very scarce and curious book, I wrote a note to him, expressing my desire of pursuing this particular book, and requesting he would do me the favor of lending it to me for a few days.” The legislator agreed, impressed by the specific request. And, after a week, Franklin returned the book, and passed on another note expressing his deepest thanks.

The next time the two saw each other, the legislator actually spoke to Franklin—something the man had never done before. From then on, Franklin’s once-enemy was eager to do him any favor he asked for. The two eventually became close friends right up until the man’s death.

Franklin attributes this strategy to an “old maxim” he once heard (although I’d bet this one came from Ben himself): “He that has once done you a kindness will be more ready to do you another than he whom you yourself have obliged.” Today, this principle is called the Ben Franklin effect. By asking to simply borrow a book from this guy, Franklin turned him into a collaborator. The legislator, who before was openly hostile to Franklin, found himself invested in Ben’s well-being. They were on the same team.

In the nearly three centuries since this episode took place, a number of studies have shown that Franklin was actually on to something. A 2015 study published in the Journal of Social Psychology found that, when an experiment participant was asked for help by a stranger, the participant ended up liking the stranger more afterward — and also felt closer to the stranger. What’s interesting is that this same effect didn’t occur when the participant helped the stranger without being asked.

You shouldn’t be shy about asking for small favors. If your cell phone dies while you’re at work, instead of asking your close colleague to borrow her charger, try asking the new guy you haven’t gotten to know yet. Or better yet, like Franklin, you might ask a person you recently locked horns with over a contentious workplace decision.

I know it sounds strange to treat, say, even loaning someone a notebook during a meeting as a collaboration. But that’s kinda what it is. And instead of treating these small moments as inconveniences, you can see them as opportunities to forge a connection with a new person and get them on your team.