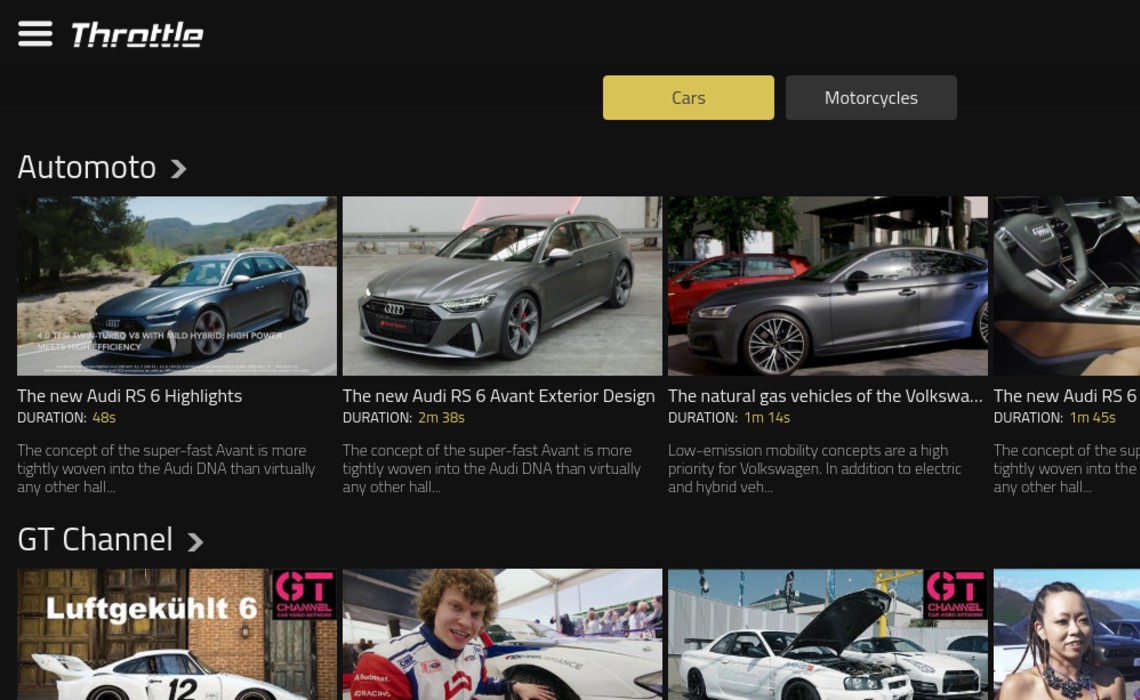 Studio71 has acquired more than 50 OTT apps from Unreel Entertainment, a white label tech company that enables creators and publishers to build their own streaming services.

The apps acquired span various content categories — including cars, comedy, lifestyle, gaming, and kids and family, according to Studio71, and have garnered millions of downloads and tens of millions of monthly views. Some of the top-performing properties included within the acquisition are Throttle.TV for auto enthusiasts (pictured above), gaming and culture brand Level One, and kids gaming and animation hub Fun Zone.

The financial terms of the deal were not disclosed.

While Studio71’s flagship business is its multi-channel network of YouTube channels, it has increasingly pushed into the OTT space. Unreel apps are distributed across Roku, Fire TV, Apple TV, and Vizio. Six months ago, Studio71 partnered with Unreel to create 100 Roku apps that distribute content from top YouTube creators. All told, Studio71 now counts over 200 OTT apps that drive 200 million monthly impressions, it says.

“With this acquisition, Studio71 is definitively expanding distribution off social video platforms like YouTube and becoming a leader in OTT with an expansive network of meaningful brands,” Nick Jacklin, Studio71’s VP of global distribution, said in a statement.

“We’ve been working with Studio71 for a while and were really excited about expanding the partnership,” Unreel co-founder and CEO Dan Goikhman tells Tubefilter. “They’ve got so many great creators on board and have really been increasing efforts in all aspects of OTT. The brands we’re talking about here are going to continue to grow and with Studio71 we’ll be adding more great content to the mix. We’re going to be exploring new brands and distribution channels together going forward as well.”

As part of the deal, Unreel will continue to act as a service and technology partner for Studio71, maintaining current apps, building new channels, and working to implement monetization across Studio71’s connected TV inventory via its proprietary Adstack TV advertising tool.