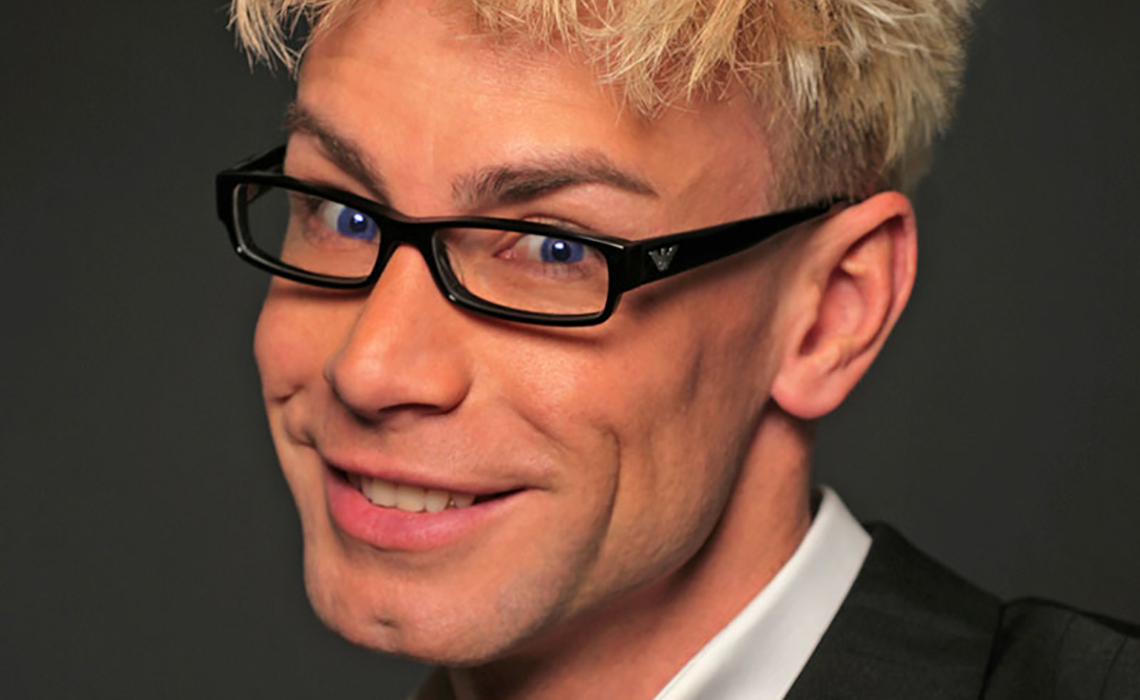 If you’ve ever tuned in to a reality show, you’ve probably seen Murray SawChuck. A seasoned professional magician and dedicated prankster, he’s starred in countless episodes of reality series like Pawn Stars, Masters of Illusion, and Don’t Blink, and has made guest appearances in programs like MasterChef and (though it’s not a reality show) Netflix’s hit ’80s women’s wrestling series GLOW.

Over the past couple of years, SawChuck (who’s perhaps better known by his longtime moniker and the name of his YouTube channel, Magic Murray) has also been making a name for himself in another entertainment circle — YouTube, of course. In 2015, he shot right out of the digital gate with a video about escaping from cops and security personnel using magic (something he says you should NEVER TRY AT HOME). That video has since netted 20 million views, and SawChuck hasn’t stopped uploading since.

SawChuck makes all those uploads, including his viral hit, with partner Seth Leach. Leach, who garnered fame of his own for producing and starring in a number of viral stunt videos, reached out to SawChuck after seeing one of his shows live. Leach offered to help SawChuck make a viral video out of his magic. When the resulting cop/security prank video did exactly as he’d promised and took off viral, SawChuck made Leach an offer of his own: go in 50/50 with him, and the two of them would create a business around making magic on YouTube.

Four years later, they’ve produced nearly 300 videos together. SawChuck has found that videos where he escapes from and/or pranks cops, security guards, and similar folks are his biggest hits, and has settled on that as his channel’s main hook. But he also makes videos where bad parkers get their just desserts, creates teleporting pranks that baffle even the sharpest of observers, and also recently got in on one of YouTube’s biggest sensations: Fortnite.

SawChuck’s global YouTube audience has inspired him to start planning to take his Las Vegas live show around the rest of the U.S. and across the world. So keep an eye out — someday, Magic Murray may be teleporting straight into your hometown.

Murray SawChuck: It feels SURREAL, honestly…I have done TV and so many television shows for over 10 years, and within three years, we have been seen by more people worldwide than I ever achieved on television. So many of our videos have gone viral, it’s really hard to believe and understand, but I am loving it! To my fans…thank you, thank you, thank you!!!! Without you showing us how much you love my content, and giving your comments and likes along with your shares, we wouldn’t have achieved over one million subscribers, let alone 1.5 million! Thank you from the bottom of my heart, and because of it, I want to even work hard to create bigger and better content for you.

Tubefilter: For those who may not have caught your many appearances on shows like Pawn Stars and America’s Got Talent…Give us a little background about you! Where are you from? What’s your profession?

MS: I am originally from Vancouver, British Columbia — moreso a smaller city next to it called Burnaby, the same city Michael Bublé and Michael J. Fox are from! I should have changed my name to Michael, it seems to be a trend, LOL. I am a professional magician…comedy magician, to be exact!

I graduated from Columbia Academy with a degree in broadcast communications for radio and television. I started magic at age seven as something just for fun, but then I realized I could do shows and make money from it, so from about age 13, I did any shows I could in Vancouver, from kids’ parties to corporate shows. After that, I toured the world with my shows and performances, landing in Las Vegas with my own show at the Tropicana Hotel & Casino. There, I currently have a resident show five days a week in the Laugh Factory Theater!

Along with doing my live shows, I have done over 21 reality shows. I am currently on my 11th season as the magic expert for Pawn Stars on the History Channel, and my sixth season on CW’s Masters of Illusion. Also, this year, I filmed a guest-starring spot on Netflix’s GLOW, Ryan’s Mystery Playdate on Nickelodeon, Hell’s Kitchen, and a CW Christmas special that will air this holiday season!

Tubefilter: What made you decide to take your talents to YouTube?

MS: I was performing live at the Tropicana, and a young kid named Seth Leach came in. He seemed to like my show, and I actually borrowed his shoe from the audience, something I do in every show. Later, he and his girlfriend bought some merchandise, took a photo with me, and left, like all my audience guests.

Two years later, he direct messages me on Instagram and says, “Hey, I love your magic and your YouTube channel. It’s awesome, but NO ONE IS WATCHING IT! I can make your videos go viral!”

I was like, “WHATTTT.” Now, I’m good friends with Lindsey Stirling, and I saw her skyrocket to fame and I knew it was because of YouTube and her partner at the time, Devon Supertramp. So when Seth wrote me, I was like, “I wonder if this is spam or someone who really knows what the heck they’re talking about…” Well, we made an agreement, and he came to shoot four videos with me in Vegas. I swear, I walked up to meet him, and he could have been my son. Hat backwards, skinny jeans, T-shirt, and a backpack, with his cute girlfriend with him. I was like, “REALLYYYYYY this is the kid that’s going to make me famous on YouTube?”

I totally left my leadership, Type A personality in the car and told myself, Murray, just listen to what he says. Don’t argue with anything, you don’t know this world. Just be a follower for two seconds of your life.

So we shot the first video, which was me drinking in public with a police officer. We shot it in eight minutes, one take. I was like, “Are you sure you got that? You don’t want to find a few more security people and redo it?” I’m used to TV, where you retake things many times. He was like, “Nope, I got it. Let’s go for lunch and do the next prank.”

I was like, Murray, bite your tongue and go with it. I did, we shot the other three videos, he hopped in his car and drove back to LA and said, “I’ll get ahold of you four to six weeks and we’ll make this work.”

I thought, We’ll see about that, thinking if I just got scammed, at least it’s a great story. And, if it was a success, I also got a great story.

Well, six weeks later, he calls, tells me he’s going to upload the first video, and see how it goes. He texted me the morning he uploaded it, and then by that afternoon, it had 800,000 views. To date, that video has more than 110 million views across platforms. That night, I called him and said, “That’s it, we’re partners 50/50. I can’t do this without you, and you can’t do magic without me.”

So here we are, three and a half years later and approaching 1.6 million subscribers on YouTube, and tons more on all the other platforms.

Tubefilter: So, like you mentioned, you do a lot of prank content–it’s a mashup for your magic and comedy skills. How do you decide on new prank ideas? Do you seek inspiration from fellow creators?

MS: We usually shoot, in a two-day period, enough content for three months. We usually only do one take and move on. Coming up with ideas, Seth and I will just start texting back and forth, usually at midnight, going off on a branch of ideas. Other ideas come up via brand deals, where someone asks us for a trick to do with a brand, so I build a new effect for that brand, then realize that effect will work for a prank/trick/etc. Also, many fellow creators bring great ideas to the table, and we will collaborate with them to bring new life to an old trick.

MS: I think it’s two things: everything is done in real time, and the tricks are all cool magic. We also have the hook of pranking people that we, as a whole people, like to see pranked, as they can be a pain in your life. Look, I love police officers, security, etc., when they are doing their job and being nice, but if they’re power-tripping — and we’ve all seen that — I have no time for them doing that just because they have a uniform on. Also, bad parking drives me nuts, so if you’re gonna park bad, BEWARE of me. I don’t like you, and you’re probably not going to like me.

MS: Some can take a week to a month just to figure out the whole idea, and others I have done right on the spot and they’ve ended up some of our most famous videos. I guess it’s kind of like songwriters…some lyrics and notes just happen, and some take time.

MS: The police/security video was big as soon as we uploaded it — our first one.

MS: I love my three long-haired chihuahuas, who are rescues, and I am a HUGE advocate for no-kill shelters and rescuing animals. I support Friends for Life Humane Society here in Las Vegas with an annual holiday show. I also love landscaping my yard…It’s like yoga for me, just working and building things in my yard. And I love classic cars, and collecting Hollywood memorabilia!

MS: What I love the most is taking OLD tricks and making them NEW again on YouTube, with a new premise.

MS: We’re always thinking ahead and creating new premises…I just bought 30 new magic effects from designers around the world that I will start putting into my videos in the next few months of shooting. My plan for the future is to do a U.S. and world tour with my prank magic style of show!

You can add yourself to the ranks of Sawchuck’s more-than-a-million YouTube subscribers at his channel YouTube.com/MagicMurray.