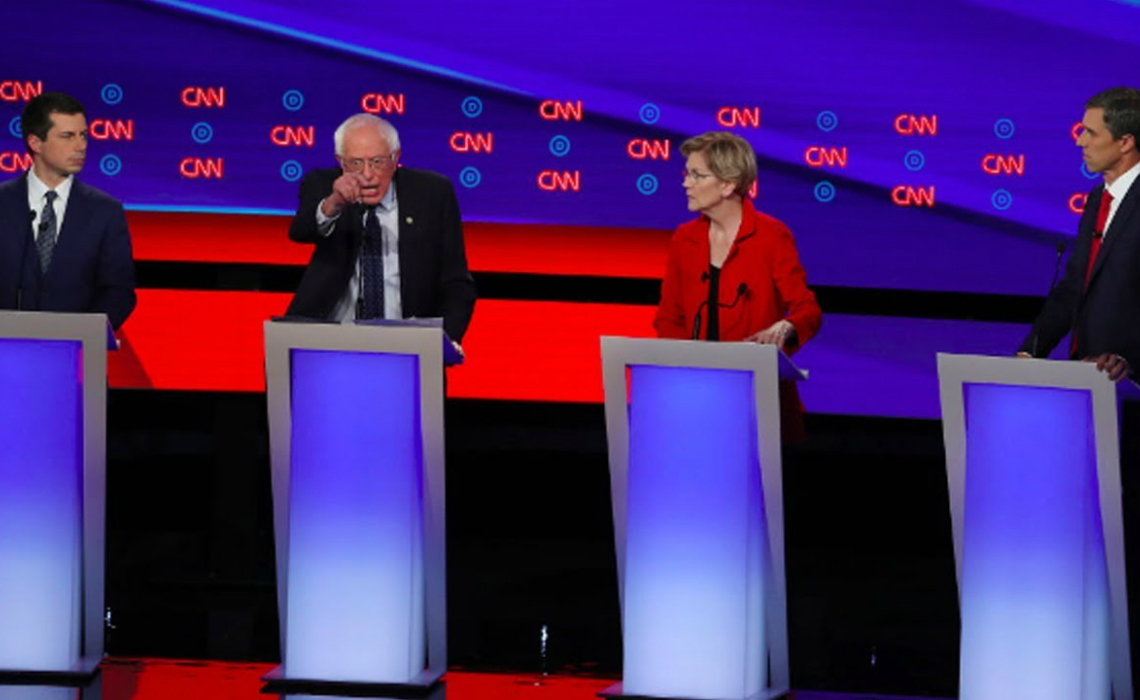 The approximately one million Democratic U.S. presidential candidates debated this week over two nights on CNN. The cable news networks’ best approximation of professional wrestling split the candidates into two groups of 10. And after both evenings, some names are receiving more of a residual bump from pundits and donors than others. But who won and/or saw the most increases in interest according to popular social video platforms like Facebook, YouTube, Twitter and Instagram?

Using data from video measurement company Tubular Labs, we’re able to examine views for all candidates over time, and see who’s seen the biggest bounce in views immediately following the debates. Note: These are not simple searches for candidate names, but for videos directly related to their candidacy for president.

The Senator from Vermont saw a big leap in cross-platform views following the debates, picking up over 7 million between July 31 and August 1 — about half of his total for the last 30 days. Most popular among those videos was NowThis’s “Bernie Sanders’ Mic Drop Moments from Second Democratic Debate,” which has collected over 1.1 million views, and the same video picked up another 810,000 views on NowThis Politics.

In the last 30 days, NowThis (1.9 million) and NowThis Politics (13 million) also have the most video views around Sanders, followed by the Daily Show’s Instagram account (600,000) and CNN’s YouTube page (568,000). NowThis channels actually published six of the 20 most-viewed Sanders videos from the last 30 days as well.

The former vice president also had over 7 million views coming out of the debates, and with one fewer day for the bump as well (Biden went on the second night while Sanders was on the first).

A good portion of those views came from Stephen Colbert’s “Joe Biden Attacked From All Sides” video (1.4 million views), as well as Trevor Noah’s night two recap for the Daily Show, which had 549,000 views.

Other top Biden videos from the debates included Fox News harping on Biden and Kamala Harris talking healthcare (392,000 views) and an Axios video where Jay Inslee responds to Biden on fossil fuels and global warming. While the Hill has the most views for Biden videos in the last 30 days (3 million), Fox News, Anderson Cooper 360 and Colbert aren’t far behind.

CNN's Anderson Cooper: "For people who are trying to choose between you and former Vice President Biden, why are you a better candidate?"

Sen. Elizabeth Warren: "I'm not here to diss any other Democrat. Get somebody else for that job that's not me." #DemDebate pic.twitter.com/3RIBgQWMp6

Warren picked up over 5.5 million views around the debates, led by a video on Anderson Cooper 360’s Twitter feed that had 1.2 million views. The clip showed Warren opting not to engage in a question around why she was a better candidate than Biden, saying “get somebody else for (criticizing other Democrats), that’s not me.”

CNN’s Anderson Cooper: “For people who are trying to choose between you and former Vice President Biden, why are you a better candidate?”

Sen. Elizabeth Warren: “I’m not here to diss any other Democrat. Get somebody else for that job that’s not me.” #DemDebate pic.twitter.com/3RIBgQWMp6

Another Anderson Cooper video (with 1 million views) showed Warren talking about how she’s ready to fight and win this race. Five of the top 10 videos around Warren from the past 30 days had to do with the debates. Warren’s own Twitter page also had the second-most views about the candidate (890,000) of any account — stemming from a video on immigration.

Harris did not see the same post-debate bump as the first debates (over 8 million views immediately after those occurred in June), but still had over 3.3 million this time around. A good portion of those came from aforementioned Trevor Noah and Fox News pieces, but other top videos came from CNN’s Josh Campbell and other Fox News videos — in general many of these opt to portray the top Democratic candidates at each other’s throats. In the last 30 days, CNN has the most views about Harris with 1.7 million on its Facebook feed, followed by the Shade Room (1.1 million), Fox News (882,000) and NowThis Politics (852,000).

And though he isn’t currently considered among the four frontrunners, New Jersey Senator Cory Booker did see 1.4 million cross-platform video views following the debates, as did South Bend, Ind. Mayor Pete Buttigieg and author Marianne Williamson. The Williamson videos were more focused on the potential comedy in her responses, rather than the substance behind the potential policies where applicable. But that doesn’t mean she didn’t make an impression.

The third debates will take place on September 12 and 13, and will be televised on ABC News. Increased standards for qualification for that next round could potentially trim the field a little. Only eight of the candidates are currently qualified with about six weeks until the event.