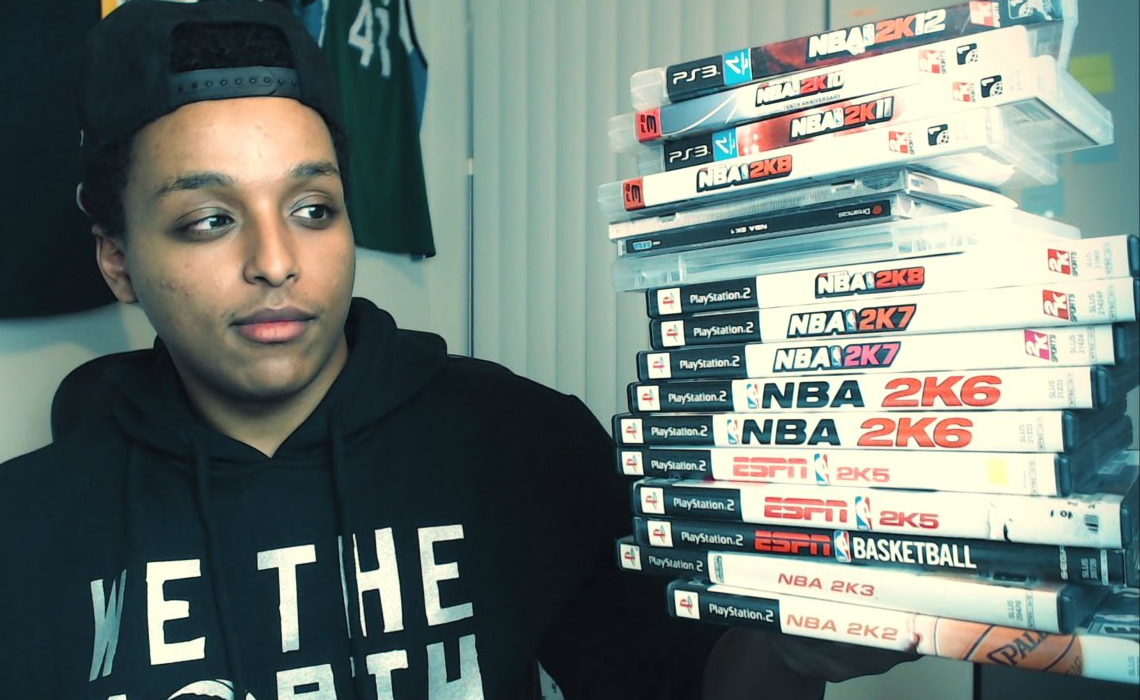 YouTube Millionaires: Agent 00 Got His Start On YouTube Editing Montages For Other People. Now, He’s A Full-Time Creator.

Like all secret agents, Agent 00 has an interesting origin story.

Okay, okay, he’s not actually a secret agent. But he is a meticulous specialist. When the creator — who solely goes by his longtime YouTube moniker — approaches the creation of a video, he brings it together from the top down. He has to have a title before he can begin work. Then a thumbnail idea. And up next is an hour, or sometimes hours of filming himself playing the game he loves more than any other: NBA 2k14. Agent 00 films looking for that “golden moment” — the perfect clip on which to hinge his next video.

If you’re thinking Agent 00 comes at things from an editor’s perspective, you’re not wrong. He got his start on YouTube editing montages for friends of his who were also professional gamers. Producing his own content involved building off the foundation of those editing skills to become a full-fledged, full-time content creator who uploads at least two videos per week, and often more.

Agent 00 approaches things like an editor, but he also comes at his content as a fan. Becoming part of the NBA 2k community on YouTube was formative for his career on the platform — so much so that he now lives with a fellow NBA 2k creator, and often films videos (like the one below) with some of the top gamers in the 2k space.

After grinding it out on YouTube for years, Agent 00 has established himself as one of NBA 2k’s top dedicated creators…and he hopes that when other people see his success, they’ll see that they’re capable of great things, too.

Agent 00: I found that I don’t really put too much focus on milestones. My friends were way more excited about one million than I was. Seeing a video perform exceptionally will always be more exciting to me than a milestone. So instead of celebrating milestones with my fans, I opt to celebrate the small wins that lead to the milestones. That mindset isn’t too uncommon with many of the content creators I talk with.

Tubefilter: Tell us a little about you! Where are you from? How did you get started playing NBA 2K14? How did you decide to take the leap and become a competitive player?

Agent 00: I’m 23 years old, born and raised in Toronto. I’ve been uploading video game content for a decade. I got my hands on the Dazzle Capture Card when I was in the sixth grade and started editing Call of Duty montages for some of my buddies who played professionally. It was tough, but I learned a lot and grew my channel to 500 subscribers before giving it up four or five years later.

After bouncing around on different games, I finally landed on NBA 2K14. By luck of the draw, all of my friends in high school decided they were going to get NBA 2K14 at launch. So we all purchased it and played every day after school. As I started to get better, I began uploading YouTube content about the game. I uploaded it daily for three years, and I finally began to see some traction. I made friends with some fun people in the 2K community, and we all helped each other grow. They’ve become some of my closest friends. Four years later, and I’m living with one of those friends in Atlanta…Legend of Winning.

Agent 00: It wasn’t ever a decision I made. It sort of just happened. I edited montages, and YouTube was the best place to post them…so I did. It wasn’t until I saw Hutch and Seannaners on Machinima racking up crazy views on gaming videos that I actually saw this as a potential career path.

Agent 00: I take a lot of time to plan video ideas, titles, and thumbnails. A LOT. I have a great group of friends around me who inspire creativity, and an editor and designer who do great work. They allow me the time to focus on steering the channel and recording more of the content I enjoy.

Tubefilter: What’s your overall content strategy? What kinds of videos have you noticed catching the most attention from viewers?

It all starts with the title. I never record unless I have a working title for the video. And I take my titles pretty seriously. On a weekly basis, I do my breathing exercises and brainstorm some creative ideas for videos I want to record. 75% of the ideas never make it past that stage.

For the ideas that do, I gather the people or things I may need for the video and set a date to shoot. When you have a group of entertaining content creators around you, it makes creating good videos a lot easier. The rest is just feedback! See what videos performed and which ones didn’t, and figure out why. Repeat that cycle.

Agent 00: Some videos can be recorded, edited, rendered, and uploaded in four hours…others can take 15 hours. It all depends on the video itself.

An example: I record a video trolling on 2K19. Two hours go by recording and I still haven’t found my golden clip. About 140 minutes into the recording, I run into a golden opportunity. In 30 minutes flat, I finish recording one of the funniest moments I’ve ever had gaming…and the video ended up hitting a millions views.

I just keep recording until enough entertaining moments pop up. Throughout the recording, I’m constantly thinking about if any of these moments can become my new working title. I always tell my editor what I have in mind for the title and thumbnail so he can make it a point of focus in the video.

Agent 00:I was in serious debt. A university student motivated to crush it “in the real world” once I graduate. I was working on YouTube with all my free time, never really expecting it to take off…and it did. I paid of my student loans, dropped out of university, and committed to making this YouTube thing work.

I’m living my dream. I don’t need a milestone to tell me that — I’m reminded of it every day. Dream house with my dream setup, with my dream car and my dream life. I’ll never take it for granted, and I think that’s part of the reason why I’ve been so consistent over the last five years. I never want to lose this. I get recognized in public about every time I leave the house, and it’s still stunning to me. Never thought, growing up, that this would happen to someone like me. I was a seriously average guy all throughout high school. It wasn’t until I was 18 that I started to pull my life together. YouTube has transformed my life, and I hope by making my videos, I can inspire others to grind to do the same.

Agent 00: Not much. I want that to change. I’d like to go out more, or maybe go on a vacation, finally. Some people I speak to think I’m miserable because work is my top priority. No…I enjoy doing this. I am getting more into cinematography and comedy. I suck at both, but hey, they’re just hobbies.

Agent 00: I love that everything is always changing. The content, the people, the rules. Everyone seems to fantasize about bringing the old YouTube back, but the old YouTube didn’t have all the new content creators I watch now…or 4K content…or in-depth analytics….etcetera etcetera, the list goes on. I just try to stay on top of the changes so I’m not being left behind.

Agent 00: No idea. Wish I knew. Things change so quick, it’s almost pointless to make a plan for next year or the year after. I just work towards growth day by day and let the rest play itself out.

You can add yourself to the ranks of the Agent 00’s more-than-a-million YouTube subscribers at his channel YouTube.com/Agent00.