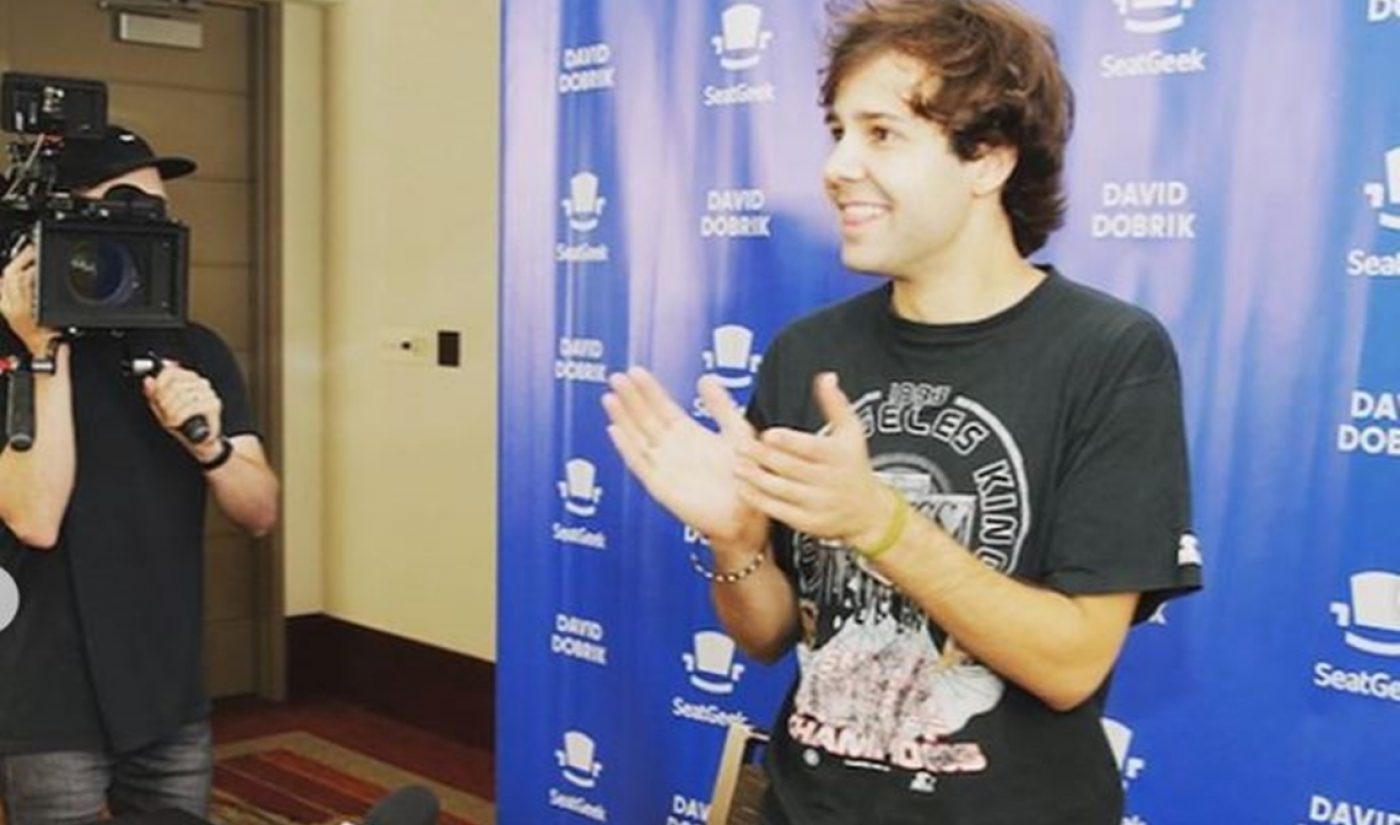 David Dobrik is precious about the ways in which he works with brands on his flagship channel, where his pricey stunts, uproarious pranks, and other eye-popping shenanigans have garnered 13.1 million subscribers, and his multiple uploads each week regularly clock over 200 million views a month.

“I made the decision early on that I would never pollute my main channel with a brand deal, where I didn’t use the money to actually make the video,” Dobrik tells Tubefilter. “My channel is so important to me that I’d never just do a promotion and then say ‘Peace,’ and just cut to the rest of the video.”

Dobrik explains that he created his second channel, David Dobrik Too, expressly for the purpose of hosting more straightforward brand deals — or “selling out,” he jokes. There, he counts 5.6 million subscribers and his sporadic uploads regularly see more than 4 million views apiece.

Despite Dobrik’s exceeding caution, however, there is one brand that has become somewhat synonymous with his flagship channel in recent years — SeatGeek. That’s because the ticket-buying and -selling app has funded a lion’s share of the stunts that have made Dobrik’s channel so irresistible, including surprising his friends with tickets to the World Series (below) and Super Bowl, purchasing over a dozen luxury vehicles, and even paying off a friend’s college tuition.

The relationship has become so special, as Dobrik sees it, because SeatGeek is hands-off in terms of talking points. Dobrik has also come to regard the company as a character in his vlogs — an honorary member of the ‘Vlog Squad‘, he says.

“It doesn’t feel like a brand integration,” Dobrik explains. “It feels like two people collaborating. It’s kinda like SeatGeek is the sugar daddy for my videos. And every time I make a SeatGeek video, it ends up becoming my favorite.”

The relationship between brand and creator is so pioneering that it has become something of a meme unto itself. A cursory search on YouTube shows that many fans have uploaded their own compilation clips from Dobrik’s vlogs in which a SeatGeek surprise is set to be revealed. Some of the videos are 45 minutes long and others have accumulated hundreds of thousands of views. Additionally, a meme was born when Dobrik recited a SeatGeek spot while loopy on painkillers after having his wisdom teeth removed — something that many fans have subsequently attempted to recreate on social media.

Even fellow vloggers like JC Caylen have pined over the unique relationship. (And Caylen may have gotten his wish: SeatGeek is sponsoring the 10-episode reality TV-style competition series on Caylen’s channel with co-creator Kian Lawley, in which 13 YouTubers have moved into a house and are competing for a $25,000 prize.)

SeatGeek had previously made overtures toward working with Dobrik before their partnership officially commenced in 2016. At that time, Dobrik approached the company about surprising his friends with tickets to see their hometown favorite Chicago Cubs in the World Series. Today, SeatGeek has sponsored 22 of Dobrik’s YouTube videos as well as five Instagram campaigns that in aggregate have generated 150 million views and 20,000 Twitter mentions, according to the company.

But it’s not just the views that keeps the partnership together. It’s the efficacy of the campaigns. Dobrik typically offers a promo code — ‘David’ — that gets consumers a $20 discount off their first SeatGeek purchase. Sales clocked from Dobrik’s code — and those of other influencers — have grown over 1,500% since SeatGeek began working with digital creators in late 2015.

Ian Borthwick is the SeatGeek exec accountable for that increase, having spearheaded the company’s influencer relationships since joining back in 2015. A former sports talent manager at Wasserman Media Group, Borthwick now serves as SeatGeek’s first-ever director of influencer marketing. Today, his team comprises four staffers who work to sponsor 150 YouTube videos per month — with all of the partnerships handled in-house.

While Dobrik is arguably SeatGeek’s highest-profile partner, the company first tipped its toes into the influencer waters when Borthwick came on board, working with NBA 2K gaming creators by giving them tickets to high-profile basketball games. SeatGeek has since collaborated with over 1,000 influencers to date — including Cody Ko, Teala Dunn, Hannah Meloche, Roman Atwood, Olivia Culpo, Brad Mondo, Sierra Furtado, and Emma Chamberlain — who have collectively garnered more than 1 billion video views. That said, Dobrik is the company’s hallmark star.

“David was one of the first people who really focused on the emotions surrounding giving away tickets and building up how meaningful it’s going to be,” says Borthwick. “Now, when David mentions SeatGeek in a video, fans don’t skip through because they know that the minute he says our name, something amazing is going to happen.”

For instance, when he wanted to buy himself a Ferrari, Dobrik called Borthwick on camera with the ask, making the company part of the video’s narrative and leaving viewers in temporary suspense as to whether SeatGeek would ultimately gift him with his dream car. (Spoiler alert: SeatGeek paid for half.)

Today, Dobrik and SeatGeek are engaged in a long-term agreement through year’s end (at least). Dobrik receives compensation for his partnership with the company, as well as funding for the aforementioned stunts. And while Dobrik is currently creating videos at a monthly cadence, Borthwick says the company is always game if additional ideas pop up beyond that scope.

SeatGeek’s success in the influencer marketing space has led to creation of a new content division within the company called Team SeatGeek. The division is meant to be more consumer-facing and bring behind-the-scenes content to fans, affirming that SeatGeek is a leader in the influencer space. Team SeatkGeek also serves as a way to highlight the ways that SeatGeek collaborates with creators offline, such as sponsoring Dobrik’s merch pop-up shop in New York City in May, as well as another pop-up in Chicago earlier this month.

While SeatGeek should be credited for its unique approach with Dobrik, the 23-year-old’s longtime manager, Jack Reed of Millennial Entertainment, says his client is also wise beyond his years — particularly in light of his preternatural business acumen.

“A lot of influencers may not feel comfortable jumping on the phone with twelve people at a brand — but David likes getting to know the executives so they can feel invested in him,” Reed tells Tubefilter. “Getting long-term partnerships really comes down to the creator. I can talk to a brand all day and all night about how great David is, but the talent has to be invested in building the brand relationship. David is wired like that.”

Accordingly, the relationship with SeatGeek has been built beyond YouTube across Dobrik’s other social channels, per Reed, as well as his podcast, Views — a weekly talk series co-hosted by longtime collaborator (and sometimes stepson) Jason Nash. Conceivably, the partnership could eventually expand to include a ticketing partnership for live events, says Reed, such as Dobrik and Nash’s Views tour.

That said, in addition to his steady relationship with SeatGeek, Dobrik does do one-off brand deals. But long-term partnerships are where the money is, says Reed. Other brands that Dobrik has collaborated with in this capacity include Chipotle, Electronic Arts, the Honey app, and Warner Bros.

“He genuinely likes working with brands — that’s why it works,” says Reed. “Some people get skittish and think brand deals can be tiresome or lame. He likes it and has fun with it, and his approach inspires partners once a brand realizes he’s there to help their cause.”