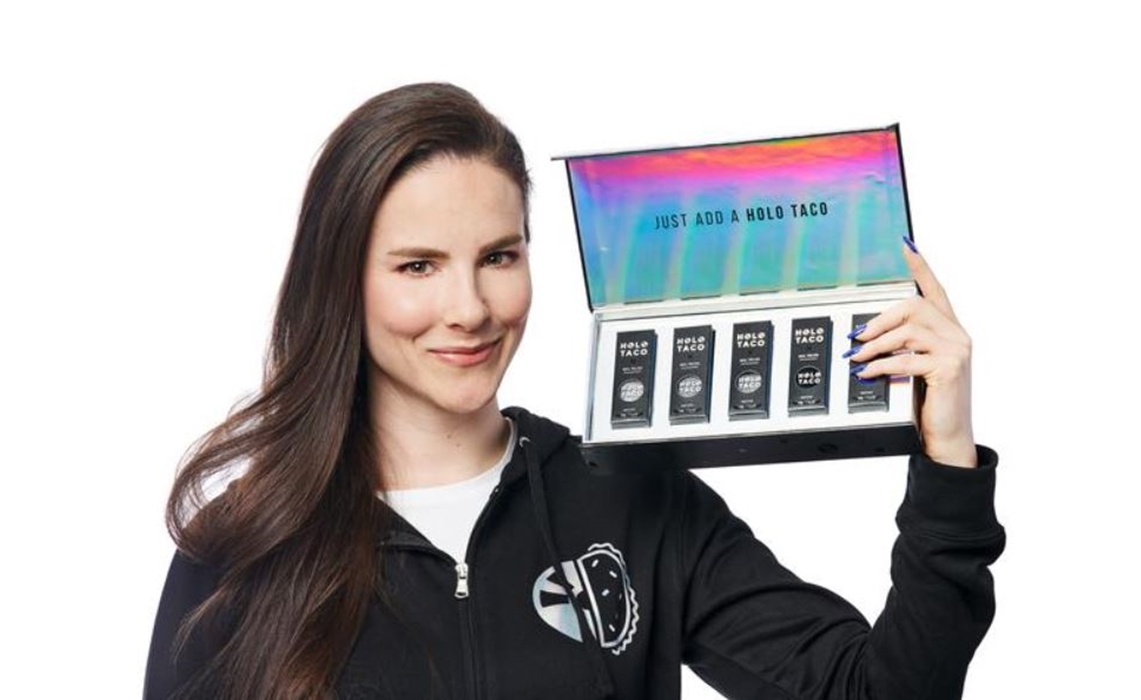 In what seemed inevitable (though was years in the making), Cristine Rotenberg — YouTube’s most-subscribed nail art creator known to her 7 million subscribers as Simply Nailogical — has launched her very own nail polish brand.

The line is called Holo Taco — a nonsensical moniker that likely makes perfect sense to Rotenberg’s fans. The name is derived from the fact that Rotenberg is a self-professed lover of all things holographic, and purposely mispronounces the word ‘topcoat’ (the top coat of polish intended to make a manicure last or add different effects) as ‘taco’.

The brand went live with an intro video on July 6, and sold out within two hours. Items are currently in the process of being restocked. Five total polishes are available at launch — all of which are vegan, cruelty-free, and produced in New York City. In addition to opaque black and blue shades ($11 each), Rotenberg also created three different holographic polishes for Holo Taco: scattered, linear, and flakie. Each holo polish is priced at $13. In addition to buying the products individually, the entire set is also available for purchase for $60.

“The truth is we weren’t able to predict how many of you wanted to buy because this is my first launch as my own nail polish brand,” Rotenberg shared in the comments section of her launch video. “I am so grateful for your support, but I was not logistically nor emotionally prepared for this level of support…We are now running the data on how many of you want Holo Tacos, and we will be restocking as soon we can.”

In her intro video, Rotenberg notes that she joined YouTube in 2014, but took her time developing Holo Taco, given that many bigger nail polish companies — who were eager to partner with her in various capacities — tend to value profits over quality. In general, Rotenberg prefers to use indie nail polish brands. She also notes that she hasn’t done a nail polish-sponsored video on her channel since 2017, which is when she started brainstorming ideas for Holo Taco. Rotenberg started prototyping the line in May 2018.

Other formulas are forthcoming, she says, including metallics, multi-chromes, and iridescent flakies.

You can learn more about Holo Taco right here: