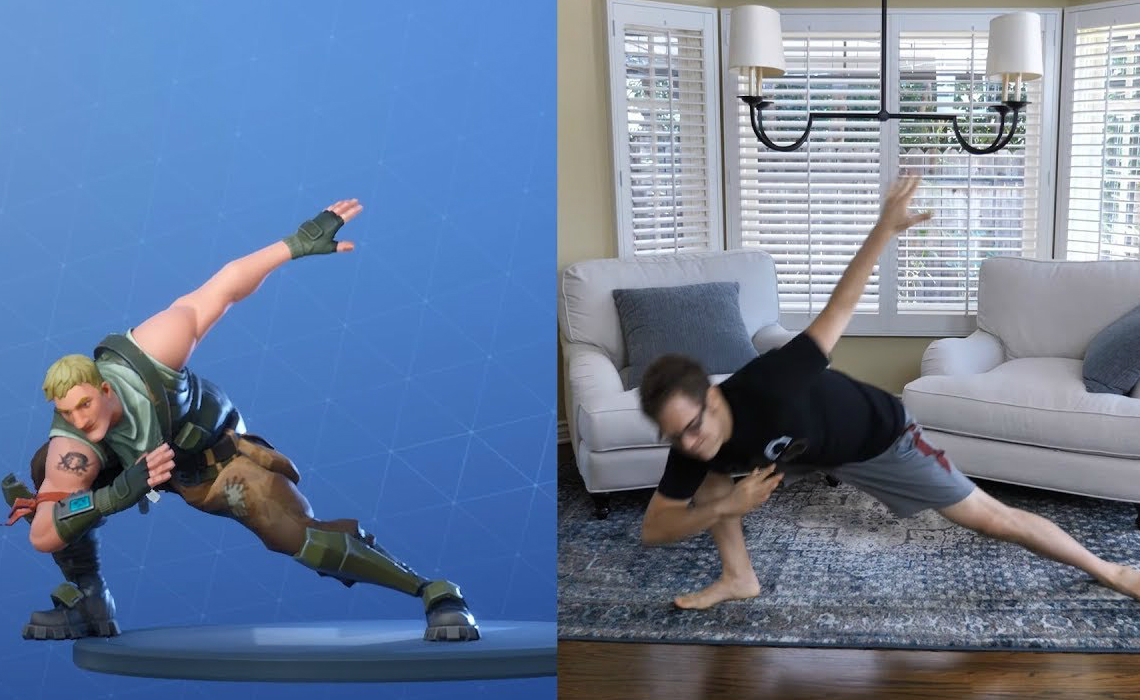 On Tuesday, massively popular battle royale game Fortnite did its weekly update, where it loads up all the new content that’ll debut over the next week.

Shortly after, details of the content to come leaked — and that’s when longtime YouTuber Jack Douglass started to get messages from his followers. Douglass (whose JacksFilms channel has 4.5 million subscribers, in addition to 216K followers on Twitch) received the same notice over and over: Fortnite had allegedly stolen his “deep dab.”

For those who aren’t familiar, Fortnite is known for its dance moves, which are purchasable through its digital store. Players who purchase the dances (which cost $2 for common moves and $10 for super-rare ones) can then make their characters perform them in-game. Fortnite’s store refreshes with new items each day, so there are hundreds, even thousands, of dances available.

The deep dab move popped up in Fortnite’s store last night. And in his newest upload, Fortnite Is Literally Selling My Deep Dab, Douglass plays the dance next to a YouTube video he uploaded two years ago, called My Lowest, Deepest Dab. The similarities are impossible to ignore.

“It’s the same thing,” Douglass says, replaying the two side by side. “You can’t be like, ‘Oh, yeah, that kind of looks like it. No no, it’s practically [motion-captured]. You would’ve thought I went in the studio, put on the mo cap suit, and did it. It’s a very faithful re-adaptation of my terrible video.”

That said, this isn’t the first time Fortnite has had a dab dance. It first introduced the regular dab last year, at the height of the move’s IRL popularity. Dabbing hit mainstream popularity around 2015, after it became a meme on Vine, but the move actually dates back to early 2010s hip-hop culture, with rapper Skippa Da Flippa credited as its inventor.

This also isn’t the first time a dance’s creator has called out Fortnite for stealing — and then selling — their move. Last year, rapper 2 Milly, The Fresh Prince of Bel-Air star Alfonso Ribeiro, and Russell Horning (aka Instagram’s “Backpack Kid”) all filed suit against Fortnite developer Epic Games for creating in-game versions of their trademark dance moves. They, like Douglass, claim none of them were contacted by Epic to seek a partnership or even permission to use their moves.

Douglass’ case is admittedly a little weaker than 2 Milly, Ribeiro, and Horning’s, as he didn’t invent the dab itself, but he doesn’t appear to be planning a lawsuit. Instead, he asks viewers to plug in his newly-made Fortnite creator code (realjacksfilms) to give him a little kickback off sales of the dance. (All Fortnite users can choose to support creators by entering code in the game. Once they’ve done so, the creator whose code they entered will receive a portion of proceeds from any purchases — to the tune of roughly $5 for every $50 spent).

The deep dab costs 200 V-Bucks, so roughly $2. Douglass says he has no problem with people purchasing the move, but figures that asking folks to use his creator code when they do so is “only fair, since, you know, that’s my move.”

“Please use my little creator code. That’d be really, really cool if you could support me just the smallest bit,” he says.

Fortnite’s tweet about the move has been swamped with comments from people demanding the game remove the dance or give Douglass credit.

Use creator code REALJACKSFILMS please to support your dabbin boy who invented this move https://t.co/tzhFwFgfoZ