YouTube Millionaires: Everything Lifestyle Daredevil Michelle Khare Wants Is On The Other Side Of Fear — And She’s Up For The Challenge 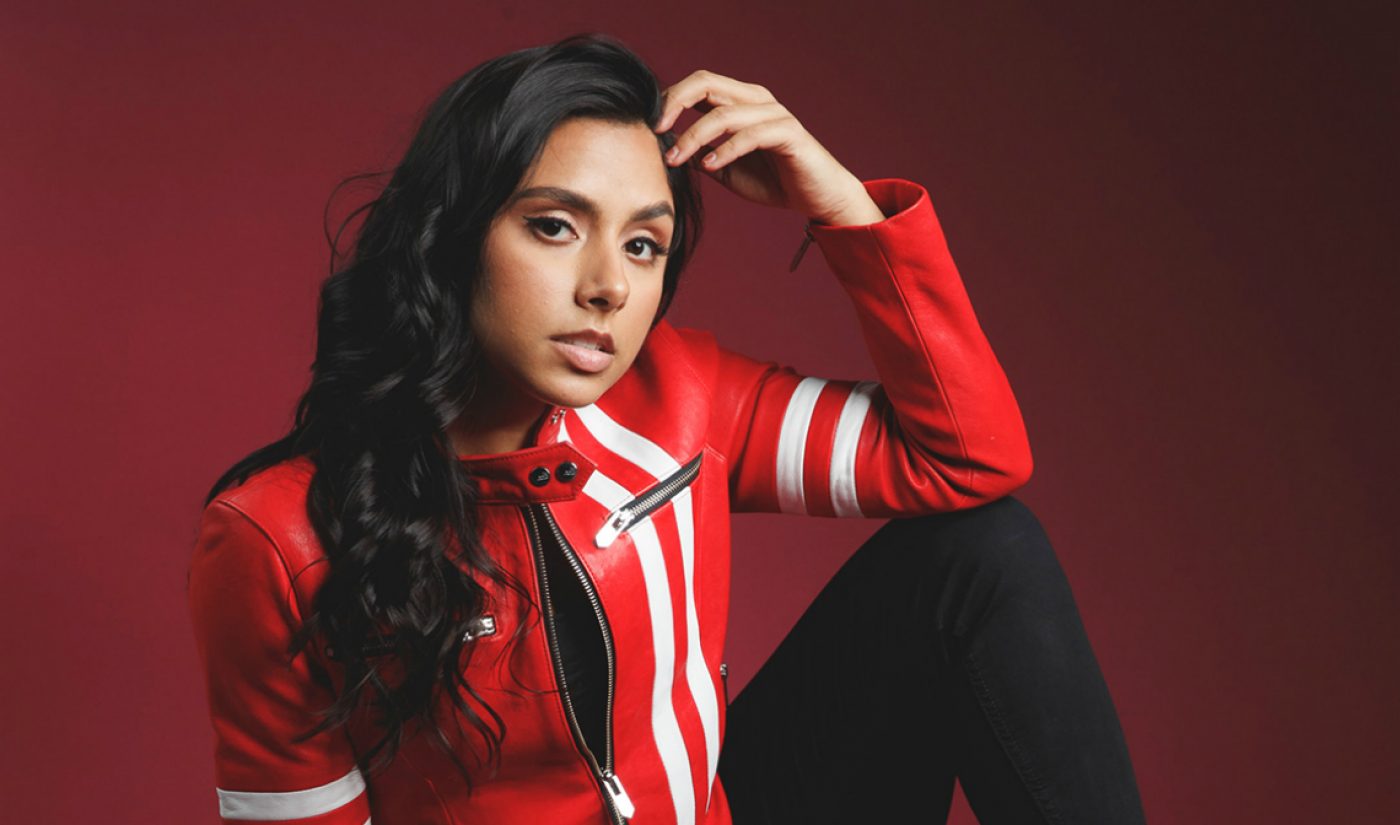 Michelle Khare is afraid of a lot.

She’s not shy about admitting it, either. For her, fear isn’t something shameful, or even negative. Instead, it’s a motivator. And it’s what has defined her YouTube channel.

When Khare started making content in 2016, she was fresh off a stint as a producer at BuzzFeed. So, as you may expect, her videos were well-produced, high-quality lifestyle content, with a focus on exploring health and wellness — topics Khare fell in love with while competing as a professional cyclist. She drew in thousands of subscribers with that content, but it wasn’t until 2018 that her channel truly exploded.

In 2018, Khare tried something terrifying: she agreed to put her body through the grueling process of training like a Victoria’s Secret model (below). She’d been inspired by other creators’ challenges, but whereas many folks do challenges that span a few hours or a few days at most, Khare wanted to push the limits. She wanted to commit to train not just for a few days, but for five entire weeks.

The video was a resounding success. It amassed millions of views, and Khare saw a rapid subscriber gain of more than 100,000. She hadn’t set out to make more than one video, but it was hard to ignore how enthusiastic people were about this type of content. So, Khare turned that video into the first of a series she ended up titling Challenge Accepted.

Challenge Accepted quickly became a place for Khare to overcome her fears. Its six-episode first season saw her tackle tasks like competing in a beauty pageant for the first time, training to be a professional chef, and learning how to voice act. In season two, she amped things up even more, traveling to Parris Island to go through Marine boot camp, becoming the shortest model to walk at London Fashion Week, and working with NASA to train like an astronaut.

But Khare’s not the only one who faces fears on her channel. Her newest series, Extreme Body Makeover, shows her taking people on a body-positive journey through one of the toughest experiences a person can have: a six-week total body makeover, complete with exercising, food habit changes, and other wellness tweaks.

Khare lives by one quote: “Everything you want is on the other side of fear.”

Michelle Khare: Hitting one million subscribers is a feeling unlike anything else. It was something I dreamed of for so long that it becoming a reality was cathartic. At the moment I hit one million subscribers, I was actually on a Warner Brothers studio tour with my family, who just happened to be visiting in town. (The employees even gave me a fake Oscar statue to commemorate the moment!) It felt like fate to be surrounded by people I love at that special moment. To my subscribers: thank you for believing in me, trusting me to tell the stories I tell, and inviting me to be a part of your life every week.

Tubefilter: Tell us a little about you! Where are you from? What was life like before YouTube?

MK: I am from a small town in Louisiana. After graduating high school, I went to Dartmouth College. I majored in technology and interned at DreamWorks Animation, Google, and on some feature film sets. I was also a professional cyclist and grew to love health and wellness. Post-college, I got a job as a producer at BuzzFeed, where I learned how to produce, direct, and edit, and transferred the fitness I gained from cycling into trying physical challenges in videos. After going up through some of the ranks, I decided to take the leap and try to start my own channel!

MK: I grew up never seeing anyone who looks like me in media. I never saw a biracial family portrayed in the way I experience firsthand, and never saw an Indian girl as the lead in a Hollywood film. In theater class growing up, it was always difficult for me to find roles that “made sense” for me to play, since there are very few roles in plays for biracial women! I knew that trying to audition for film and television would be equally as difficult. YouTube allowed me the opportunity to grow an audience and showcase my skillset without having to wait for a Hollywood producer to greenlight a project or take a chance on me.

MK: On my channel, our flagship show Challenge Accepted is all about diving headfirst into communities and challenges for an extended period of time. This can range from training with the U.S. Marine Corps at boot camp [note: see video below] to entering a beauty pageant to becoming the shortest model to walk London Fashion Week. My channel team and I are committed to ensuring that every video we release is next-level, and hits three pillars: entertaining, educational, and inspiring.

Tubefilter: Tell us more about Challenge Accepted! How did you decide to take the plunge and start a series? How do you choose which things to try for each video?

MK: At its core, the show began as a way for me to overcome some of my greatest fears. I often would see people taking on challenges for a day or week — but wondered, what would it be like to commit in a way that most people would never dare to, and change my life for multiple weeks or months at a time?

Tubefilter: You mentioned weeks or months — how long does an episode of Challenge Accepted take to make, from conception to finished product?

MK: Our videos often take one to four months to produce from end to end (our runway documentary took over a year to make)! I’m thankful to work with an incredible creative director (Garrett Kennell) and editor (Silas Orteza), as the three of us challenge each other to keep upping our game and telling detailed accounts of the crazy challenges we take on.

MK: My audience began growing the most when I finally found my unique voice on YouTube in longer-form content. About a year ago, I made a video documenting my experience training like a Victoria’s Secret model for five weeks [note: see video above]. This went on to become the first episode of Challenge Accepted. I allowed myself to be free, emotional, and honest in the storytelling in a way I hadn’t before. The response was incredible — we grew about 100,000 subscribers from that video alone. It inspired me to push myself to make longer, more in-depth videos that showed all sides of the topics explored.

MK: I LOVE collaborating with subscribers! I am thankful to them for the success of the channel, and it’s important to me to give back and to share it with them.

Tubefilter: What do you get up to in your daily life outside of YouTube?

MK: Outside of YouTube, I am committed to multiple acting classes weekly, and auditioning. My personal goal is to one day be on an action television show or film. I’m hoping that all of these crazy skills will help me do that! 🙂 Besides that, I make any excuse possible to get a massage! Because the work we do is so mentally and physically taxing, I’ve learned over time that prioritizing self-care is just as important as the hustle.

MK: My favorite part of making content for YouTube is that it allows entrepreneurs to create media and grow an audience without having to “prove their worth” to some executive somewhere. Anyone with a camera is capable of becoming a YouTuber.

Tubefilter: What draws you to the extremes of life?

MK: One of my favorite quotes is, “Everything you want is on the other side of fear.” The spaces of vulnerability, discomfort, and fear allow me to grow and learn new things about myself I never would have before. Life happens once, so why not experience it in the highest form possible?

MK: On the channel, I’m excited to continue growing with my team and challenging ourselves to achieve new heights. We’re also very excited about our new series, Extreme Body Makeover, where I help a contestant embark on a six-week health and fitness makeover. I love this series because it’s an opportunity for me to share what I’ve learned and give back to others.

Beyond the channel, I’m continually looking for ways to expand myself as a human being and entrepreneur. I’d love to have a fitness clothing line. I’d love to be cast on a show, or sell my own show. But at the end of the day, if I can just inspire one young woman to try something that once scared her, I’ve done my job.

You can add yourself to the ranks of Khare’s more-than-a-million YouTube subscribers at her channel YouTube.com/MichelleKhare.