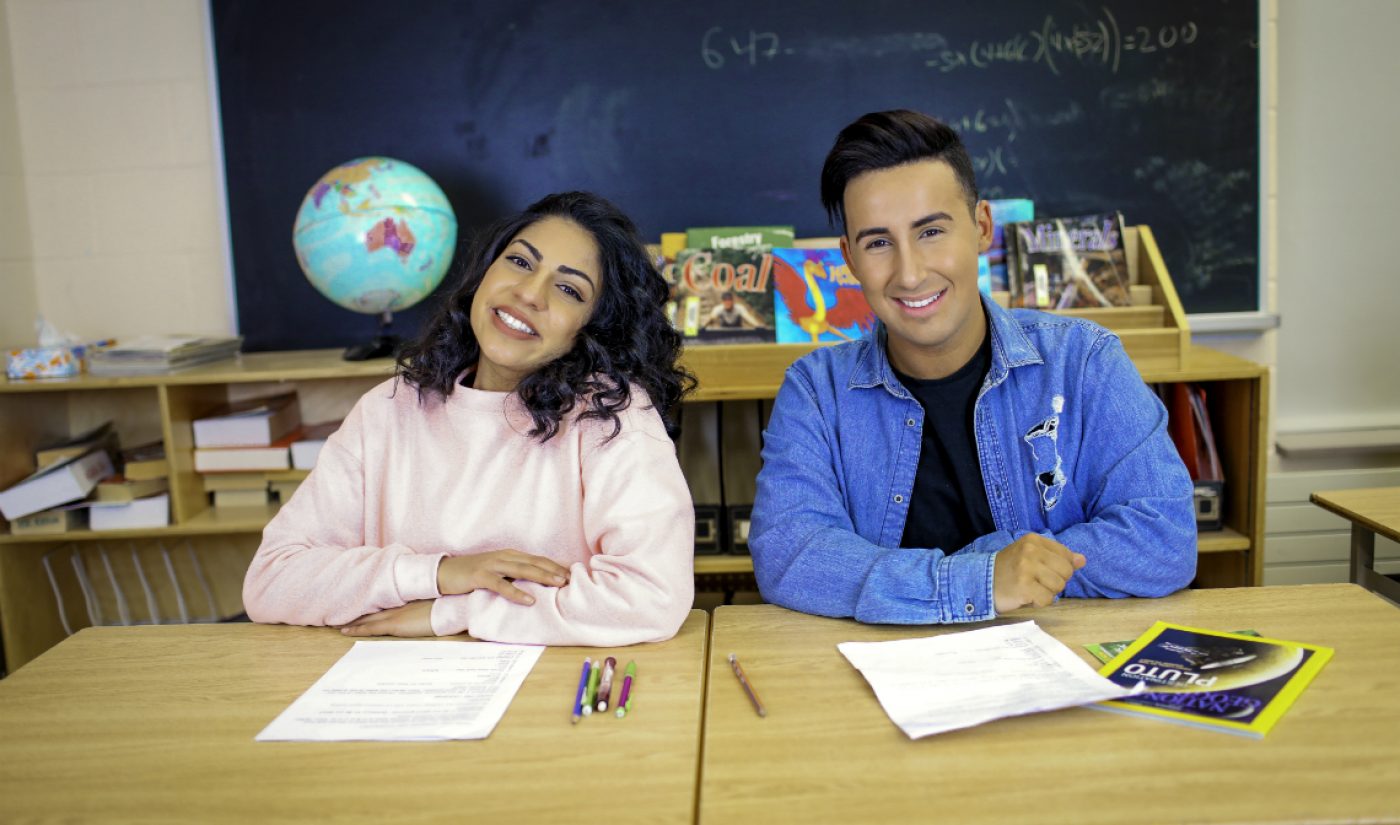 If you’re a fan of The Amazing Race, this week’s YouTube Millionaires might look familiar. But even if you’re not a reality TV devotee, you may have seen Dan Kipnis and Riya Malik on their shared YouTube channel, where they’re both writers, directors, producers, editors, and one-person fleets of actors for stories set in the fictional universe of Beverly Valley High.

Kipnis and Malik met in grade school more than a decade ago. The pair, who became instant best friends, created their YouTube channel back in 2014, but it wasn’t till they became contestants on The Amazing Race Canada in 2017 that they truly started to develop their channel’s content direction. Before being accepted as contestants, they’d begun to feel like their content — which often chased YouTube trends like challenges and tags — was getting stale.

But during their two-episode journey with The Amazing Race, they had time to think about what they wanted to make, and the kind of creators they ultimately wanted to be. Upon their return to YouTube, they conceptualized Beverly Valley High: a bright, occasionally glitzy, and often drama-filled fictional high school populated with characters all played by Kipnis and Malik.

This pair of creative chameleons produce one 10 to 15-minute skit per week. And while all their videos are set at Beverly Valley and tie into the universe’s overarching storyline, they can be watched as standalones.

Ultimately, the series is meant to be a kind of sitcom — one Kipnick and Malik hope their viewers can come back to again and again to revisit their takes on tackling challenges at school, with friends, with family, and in life.

Riya Malik and Dan Kipnis: It is surreal to think so many people around the world watch our videos. We want to tell every supporter that we love and respect each and every one of them. We cannot even express in words how much our fans mean to us. We’re so grateful to have the privilege and opportunity to have reached over one million souls with our work. We are so appreciative that people give their time to watch our content, and that is what motivates us to work so hard to always produce the best content we can.

Tubefilter: Tell us a little about the both of you! How did you meet?

RM & DK: We met in school in the fourth grade, on a school ski trip. Riya had just moved, and she was the new girl in school. Once we met, we instantly became the best of friends, and the rest is history. We never left each other’s side. We grew up together, we experienced ups and downs and every milestone we had individually as well as together. We’re more than friends — we are family.

Tubefilter: How did you decide to launch a YouTube channel together?

RM: Daniel had just started a channel. He was about two weeks in, and he had two or three videos up. I just called him up one day and said, “We need to start a channel together.” And Daniel, being a “Yes” type of guy, started working on the channel art immediately, and Dan ad Riya was born. It felt like we decided to start a channel in a single moment, and from there on out figured it out as we went on our journey. We are self-motivated people and we like to act fast when we have an idea. We have learned the only way to “figure it out” is by starting and just doing. Mistakes are inevitable, but they are the only way you learn.

RM & DK: In this day and age, content is everywhere on multiple platforms. We are living in an information overload. It can be overwhelming when you try to think of different ways and strategies to make your content stand out. We’ve been making content for a while, and our turning point for our channel was when we took a step back and asked ourselves, What do we like to genuinely create? What type of content makes us happy?

The only way to stand out is by creating content you truly love to create, because that is what you will do best. No one can recreate what is authentic to you. When you love the content you create, people on the receiving end can see and feel that. Viewers are smart, and they want something that is real. As long as you keep it real and stay true to you, your content will stand out. You will gather a community and audience who is just like you. Your subscribers aren’t just your fans — they are your friends.

Tubefilter: You mainly produce skits. How does that work from the production side? Do you both write? Do you both direct? How is all the back-end stuff set up?

RM & DK: We both equally share all the tasks. We think of the concepts, we write, produce, direct, film, act and edit…and everything else in between. It is a two-person show. We wear all the hats behind and in front of the camera. We play, give or take, around 15 different “characters” between us on our channel. It is a lot of work, but we love every second of it!

RM & DK: The average video takes us about five full days, from scripting, filming, and editing, to posting. As years passed, and we developed ourselves as creators, we started putting on bigger productions with our videos. The both of us can play up to 12 different characters in one video, which takes time because we have to coordinate who is going first based on makeup looks, which characters are sitting next to each other in a scene, and what sets are available to us on specific dates, not to mention that our videos now range from 10 to 15 minutes in length.

Tubefilter: Have either of you ever experienced creative burnout? What do you do to combat it?

RM & DK: We can truly say we have never experienced creative burnout. Everyone can have a day where they don’t feel as creative, but that is when you should take a step back, breathe, and come back to it. We feel you can only be burned out when you have the stress of competing with others. Comparing yourself to others will always burn you out. The key to get over a “burnout” is to create content you have fun creating, because if you are having fun being creative, you will be in a state of gratitude for your work and audience. When you are in this state, you cannot feel burned out.

RM & DK: When the both of us started YouTube, we jumped on any bandwagon we could, because that was what we thought we had to do in order to gain subscribers and views. It took us a year just to hit 1,000 subscribers. For the first two to three years, we would do anything, from challenges to tags to taste tests.

As time passed, we started feeling dissatisfied with our videos. We didn’t think much thought process was going into them, and there was no originality or any positive impact our videos were having on people. We had some time to think about what we REALLY wanted to do on YouTube while we were on The Amazing Race Canada back in 2017.

When we came back from the race, we started to create skits, but we needed more people in our videos to actually be able to create proper storylines. Of course, all our friends had their own jobs and lives, so it came down to the both of us putting on wigs and costumes to play other characters. With each video created, new characters were born, and new storylines were constructed, until we created a fictional school called Beverly Valley High.

Today, all our videos follow the lives of several students who attend Beverly Valley. Like a sitcom, each video or episode can be enjoyed on its own, but there is an underlining storyline with all the characters’ plots and relationships with one another. There wasn’t one specific video that set us off, but rather a collection of videos, as well as being consistent.

RM & DK: Our days are usually packed, but when we aren’t doing anything work-related, we try to spend some time with our family and friends. The both of us are super close with our families, so if we have a moment to ourselves, family time is important.

RM & DK: The best part about making content for YouTube is that you can reach people in every corner of the world. It’s amazing what the power of YouTube can do. We get messages all the time from people — specifically kids — about how much they look forward to watching our videos. Our goal is to spread love and laughter to the world from our content. Being a child can be tough, and if we can show them that being weird and different is okay through our YouTube videos, then we left a mark on this world.

RM & DK: The next step for our channel is to keep creating videos that are funny and make people laugh. We want to keep creating bigger and better videos where our audience doesn’t know what to expect next, and keep them wanting more. As for future plans, we have a list of things we are working toward, which we are super to excited to share very soon!

You can add yourself to the ranks of Dan and Riya’s more-than-a-million YouTube subscribers at their channel YouTube.com/DanAndRiya.