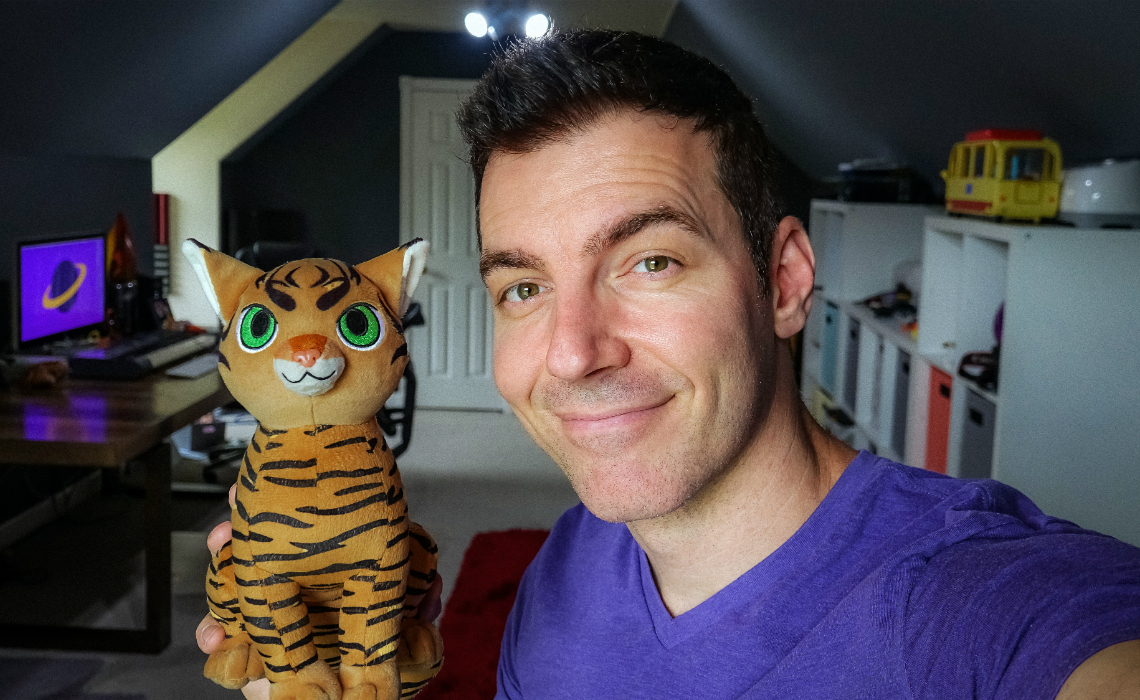 There are few things the internet loves more than feline furballs, but when Williams uploaded “The Mean Kitty Song” (below) to then-fledgling YouTube in 2007, he didn’t expect it to go viral. But it did. Like, it really did. Today, “The Mean Kitty Song,” starring Williams’ cat Sparta, has been viewed 90 million times, making it the third most-watched cat video on all of YouTube.

The No. 1 spot is predictably held by pixellated meme monster Nyan Cat. Uploaded in 2011, the original Nyan Cat video has a whopping 167 million views. But the second most-watched YouTube cat video is “How To Get A Kitty Belly” (below) with 142 million views — and Williams is behind that one too. He uploaded it last year, sending Sparta massively viral again.

Williams maintains several YouTube channels, including his flagship SMPFilms (628,000 subscribers), where he originally uploaded “The Mean Kitty Song.” After the song went viral, people wanted more Sparta content. Since Williams had designated SMPFilms as a place for him to upload his short comedic videos, he gave Sparta his own channel — and it’s Sparta who’s receiving today’s YouTube Millionaire crown.

His channel, appropriately called TheMeanKitty, recently hit one million susbcribers. On the channel, Williams uploads one or two videos per month. Sparta (and his feline siblings) aren’t the most cooperative actors, so all the footage Williams gets of them is candid. After filming for a while, he sees what he’s got, and retroactively creates a narrative that fits the material. There have been scuffles for the throne, new house tours, and instructions on how to pet a cat properly (and not die).

Sparta also isn’t the most cooperative interviewee, so we had Williams fill in to celebrate his milestone. Check out our chat below.

Cory Williams: The same as it felt to hit my first 100. Absolutely amazing! I’m very thankful to be able to impact so many lives in a positive way, and I can’t thank my fans enough for all their support.

Tubefilter: Tell us a little about you–and about Sparta! How did you two meet in 2007?

Williams: Sparta was about two months old when he adopted me. A little girl was going door to door trying to find him a home because her mother was going to take him to the shelter. When she showed up at my friend’s door, they took Sparta in to help the little girl keep him out of the shelter. A week or two went by, and Sparta just wasn’t working out in his new home. That’s about when I arrived.

I’ve never really been a cat person, but something about this little cat was different. I don’t know if it was the way he ripped holes in my shirt, gnawed on my arm, or broke a few glasses in my friend’s home, but he was a little crazy, like me, and I liked that. So I took him home with me, and he has been by my side ever since.

Tubefilter: How did you decide to make Sparta the focus of your channel?

Williams: Back in 2007, I wrote a song called “The Mean Kitty Song,” and the music video went viral over night. It got so big that the audience I had before was suddenly overcome by my new cat-loving audience, and it was hard to create anything non-cat-related without thousands of people saying, “Where’s Sparta?” So, I created a channel to help keep a separation between Sparta’s videos and my comedic short films.

Williams: I love what I do, and it shows. My passion in this is to not only create fun videos for people to watch, but to also teach them valuable lessons about life. On The Mean Kitty, I’ve always tried to remind people that pets are people too. Kind of. I feel like some people forget to show love to their pets from time to time and just pass by them like furniture. The videos I make help people to reconnect and have fun with their fur monsters.

Tubefilter: As you mentioned, “The Mean Kitty Song” went hugely viral–I’m guessing it brought you a lot of subscribers? How did you keep bringing in views and subscribers after that?

Williams: “The Mean Kitty Song” did go viral, but it’s not actually my most-viewed video. My video “How To Get A Kitty Belly” is the most viewed cat video of all-time (aside from Nyan Cat, who’s not a real cat). “The Mean Kitty Song” is the second most-viewed cat video of all-time. So a lot of my subscribers were brought in by both. Really though, I just keep creating fun sharable videos for people to enjoy and that’s what keeps new people around.

Tubefilter: You mentioned a lot of people asked “Where’s Sparta?” after “The Mean Kitty Song” went viral, so you gave Sparta his own channel. How else did you switch up your content strategy?

Williams: My strategy is and always has been to follow my heart and do what’s fun for me to do. The moment it’s not fun anymore, I stop. I have always been really good at creating online marketing strategies, which is also what made me YouTube’s first paid content creator. That’s actually a little-known fact. I was also the first YouTuber to receive corporate sponsorship to make videos full-time on SMPFilms, but that’s a story for another time.

Williams: My production process depends on my cats. I usually just pick up a camera and start filming. If nothing happens, then nothing happens, but sometimes something does happen, and I’ll write funny stories based on whatever occurred. My cats aren’t trained in any way, so in order to make something truly unique that the world hasn’t already seen, I have to be very creative with the footage I manage to get from them.

Tubefilter: In addition to The Mean Kitty and SMPFilms, our family also runs LiveEachDay. What’s it like balancing multiple YouTube channels? How is your creative energy split?

Williams: With the help of my beautiful wife and business partner, of course! She manages LiveEachDay, while I put all of my focus on TheMeanKitty and JustForKids (my channel dedicated to educating children between the ages of two and six). I predict that my new channel, JustForKids, will hit one million subscribers by the end of the year. Since I have two young kids myself (ages one and three), kids’ content is where my heart is really is at the moment.

Tubefilter: Your content has gone viral numerous times. How does that affect the growth of your channels?

Williams: Any time I go viral, I notice big spikes in my subscriber base, but my growth has always been fairly steady. The only issue I’ve ever had with growth is that I’ve never been one to put all of my eggs in one basket like most others do. You’d think that the guy who’s been making YouTube videos professionally longer than anyone else in the world would at least have tens of millions of subscribers by now, but subscriber numbers aren’t as important to me as enjoying the work I do.

I like making more than just short films, music video, cats, vlogs, and educating children. I love trying new things a lot, and with that comes a lot of new challenges. Don’t get me wrong — it’s great to have large subscriber numbers, but love, passion, and effort are way more important in order to maintain relevancy.

Williams: I love to make videos, but I live to be with my family. My wife and kids are my world, and life has never been this good. I love being a dad more than anything I’ve ever done by far.

Williams: The people. YouTube is an excellent place of people to watch and connect. My reward for posting new videos is always reading the comments afterward. It’s not that I’m looking for praise (although I don’t mind it, obviously), but what I really look for is people who share similar experiences. People who truly understand the deeper meanings of the videos I create. Most might say, “Aww, cute cats!” but the comments I truly like to read are the ones like, “I remember when my cat did that. He would always…” Even though I don’t always reply, I do read just about every comment I get, and I love reading shared stories.

Tubefilter: What’s next for your channels? Any plans looking to the future?

Williams: JustForKids is where it’s at for me now. In the last three months, I’ve already gained over half of the total views that LiveEachDay has had in nine years. However, it’s not the views I’m excited about — it’s the number of lives I’ve touched. There’s a lot of children, just like my own, that I’m helping to educate, and I have big plans in the future of this channel.

Right now, I’m telling new stories in totally original hand-drawn and animated environments while teaching valuable lessons using self-photographed and animated toys — characters that children are familiar. But we’re slowly pulling away from [making content with other people’s characters] as children become more aware of our channel and our own unique characters, like Captain Adventure.

You can add yourself to the ranks of Williams’ more-than-a-million YouTube subscribers at his channel YouTube.com/TheMeanKitty.