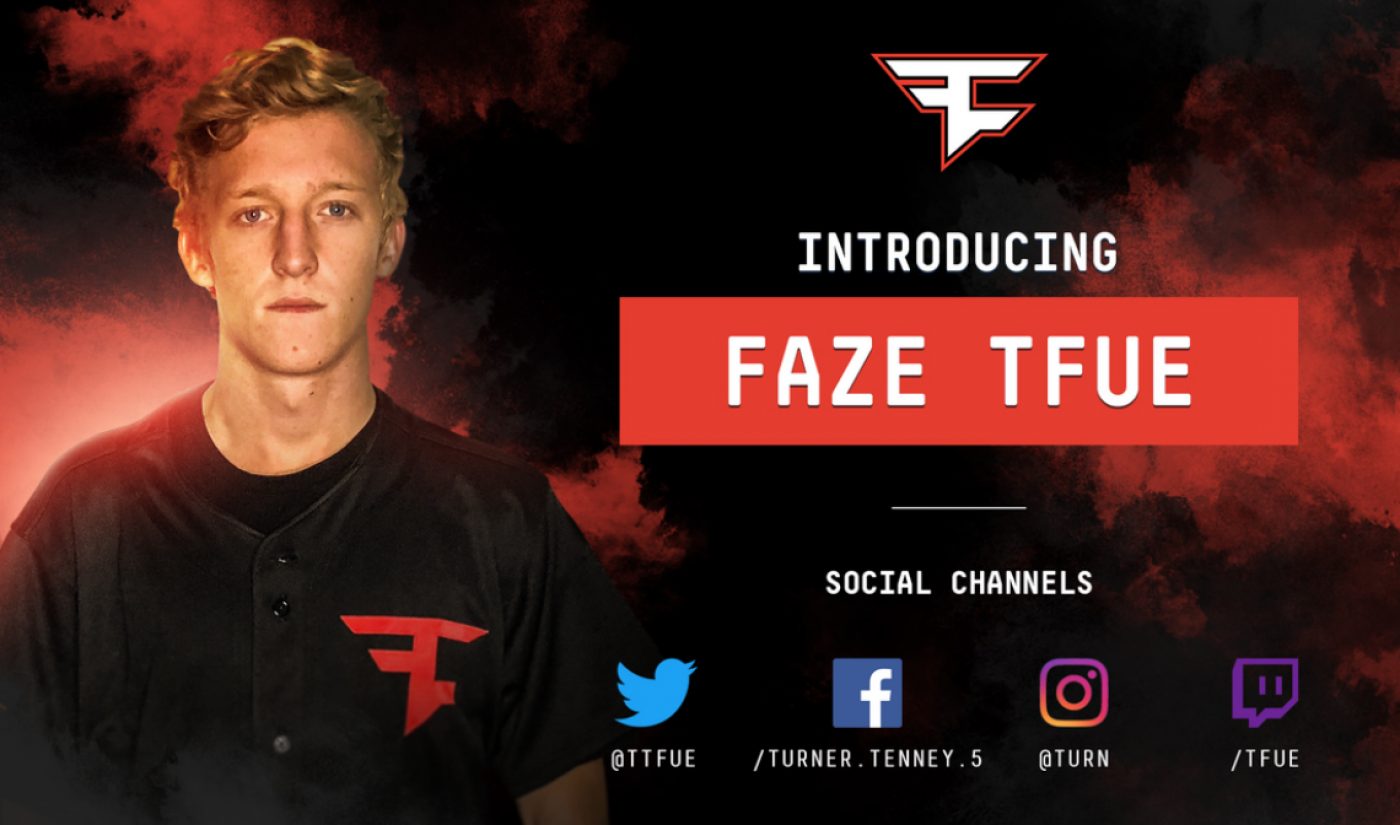 Top esports pro Tfue (10.7 million subscribers on YouTube; 6 million followers on Twitch) has filed suit against massive gaming and entertainment collective FaZe Clan, accusing it of damaging his career and not paying him money he’s owed from sponsorships.

According to court documents obtained by The Hollywood Reporter, primarily Fortnite gamer Tfue (whose real name is Turner Tenney) signed with FaZe Clan in April or May 2018. By September, he wanted out. His suit, filed today in Los Angeles County, brings a bevy of complaints against FaZe Clan — most of them stemming from FaZe Clan’s apparent treatment of sponsorships.

Under the terms of Tenney’s contract with FaZe, while he’s a member, FaZe must arrange all his sponsorship deals for him. Tenney’s therefore been prevented from signing any deals on his own — something the suit says has hindered his ability to work as a professional in the esports space. Additionally, the suit alleges FaZe Clan takes a “grossly unconscionable commission” for the deals it does arrange — up to 80% of what Tenney earns from them.

FaZe Clan is paid directly for sponsorships in which Tenney participates; the organization is then supposed to take its cut and pay the rest to Tenney within 30 days. But that hasn’t been happening, Tenney alleges. He says FaZe Clan hasn’t been paying out, and owes him for an unspecified number of sponsorships. Tenney doesn’t just want the 20% cut laid out in FaZe Clan’s agreement, though. His lawsuit is seeking 100% of what FaZe brought in from his sponsorships.

Why? Because, citing California’s Talent Agency Act, Tenney alleges FaZe Clan does not have a license to operate as a talent agency. Therefore, by performing services like arranging brand deals and appearances on behalf of FaZe Clan members, it’s illegally operating as an unlicensed agency, the suit says. The suit also points out that because esports is such a new frontier, there’s “little to no” regulation or oversight — which is likely why FaZe Clan has reportedly been able to act as a talent agency without securing a license to do so.

As for how much money Tenney’s sponsorships brought in, in a rebuttal statement from the FaZe Clan tweeted shortly after news of the lawsuit broke, the Clan said it’s collected a total of $60,000 over the course of its relationship with Tenney. That means Tenney’s 20% cut entitles him to $12,000. However, a label on court documents indicates Tenney is seeking an amount greater than $25,000.

FaZe’s response doesn’t address Tenney’s concerns about sponsorships, but does point out that in the case of its gamers’ tournament winnings and “content revenue,” the ratio is apparently flipped: FaZe Clan takes 20%, while gamers take 80%. (It’s not clear what content revenue refers to, as FaZe Clan claims to have taken $0 of earnings from Tenney’s YouTube and Twitch content.)

Prominent FaZe Clan member FaZe Banks did address sponsorship issues, and appears to be saying the ratio remains the same for sponsorship deals — 20% to FaZe Clan, 80% to creators. In his tweet, he says FaZe Clan only collected 20% of Tenney’s sponsorship earnings, so $60,000 of a total $300,000.

OK LAST TWEET – To clarify Turners contract does outline splits in prizes, ad revenue, stuff like that. But again we’ve collected absolutely none of it with no plans to and that was very clear to him. We have collected a total of $60,000 from 300k in brand deals (20%). That’s it

Sorry I’m done, I just had to tweet the actual numbers. Tfue makes millions and millions monthly and we have earned $60k from our relationship with him IN TOTAL. It’s the most important part I need to be clear about.

Tenney’s suit also contains complaints not related to money. It alleges FaZe Clan encourages dangerous behavior amongst its gamers, including underage drinking, illegal gambling, and risky physical stunts. The suit says Tenney was pushed to perform a skateboarding stunt, and subsequently suffered an arm injury that resulted in permanent damage.

“Until now, Faze Clan has enjoyed the fruits of this illegal business model with impunity because no-one could or was willing to stand up to Faze Clan [sic],” the suit says. “Those days are over. Through this action, Tenney seeks to shift the balance of power to the gamers and content creators/streamers, those who are actually creating value and driving the industry.”

You can read FaZe Clan’s statement in full below.